Chargers vs. Cowboys: 10 Things for Chargers Fans to Watch For 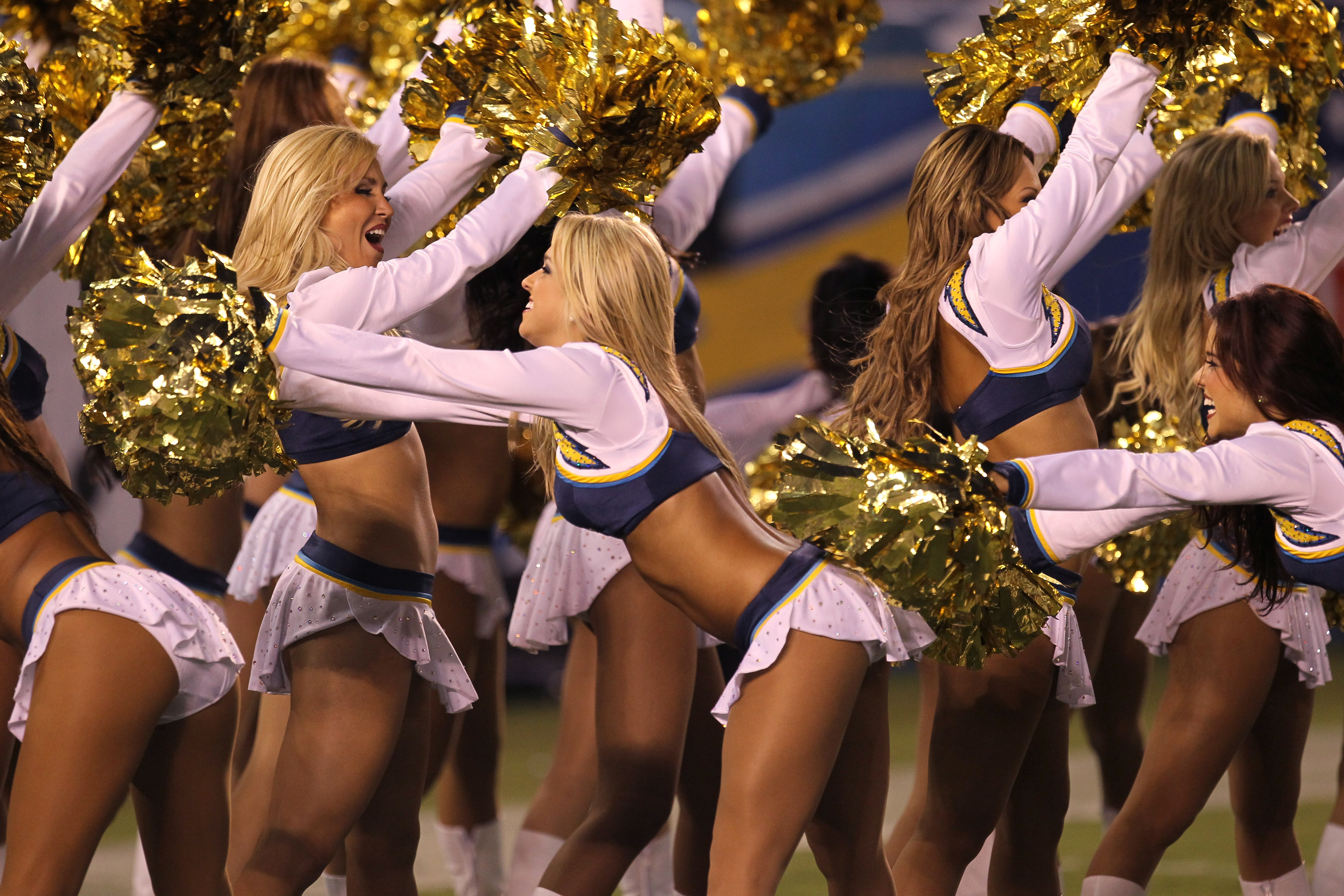 The San Diego Chargers are coming off an impressive win over the Chicago Bears last Saturday, but as it goes, anything can happen on any give Sunday, or in this case, any given Saturday.

The Chargers are set to take on "America's Team," the Dallas Cowboys. The game has all the makings of a bitter rematch from San Diego's win at Texas Stadium last year.

San Diego has a chance to come with away with a victory if they continue to play with the intensity they showed against the Bears.

Philip Rivers to Come Out Throwing 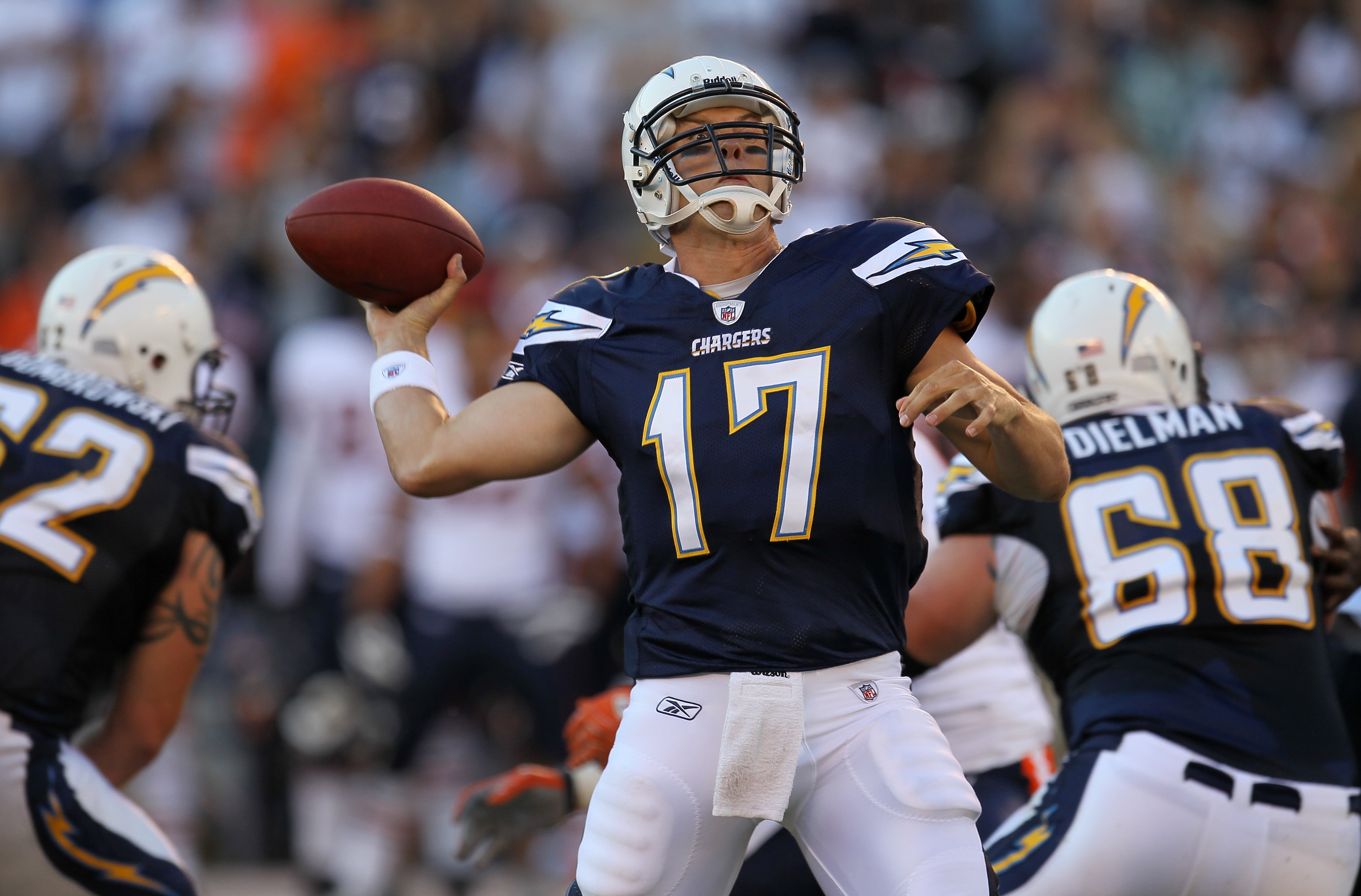 Look for Philip Rivers to come out throwing. Rivers looked incredibly solid in the Chargers first preseason game, completing four of six passes for 62 yards and a touchdown.

The last time the Chargers and Cowboys met, Rivers was 21 of 32 with 272 yards, one touchdown, and one interception in the win

Rivers will once again see limited action in Saturday's preseason game, playing one to two series at most.

Vincent Jackson Who? Time for Malcolm Floyd and Legedu Naanee to Shine

With Vincent Jackson maintaining his stance on sitting out the whole season due to a contract dispute, other members of the Chargers talented wide receiver corps have a chance to strut their stuff.

Malcom Floyd, who has been one of Philip Rivers favorite targets during training camp, wasn't thrown to during the Chargers win over the Bears. Look for him to play a more active role since he's taken over the number one receiver slot during Jackson's holdout.

Legedu Naanee made his presence felt early during last Saturday's win, grabbing a Philip Rivers 28-yard pass in the corner of the endzone for a touchdown. Naanee is in his fourth-year out of Boise State. 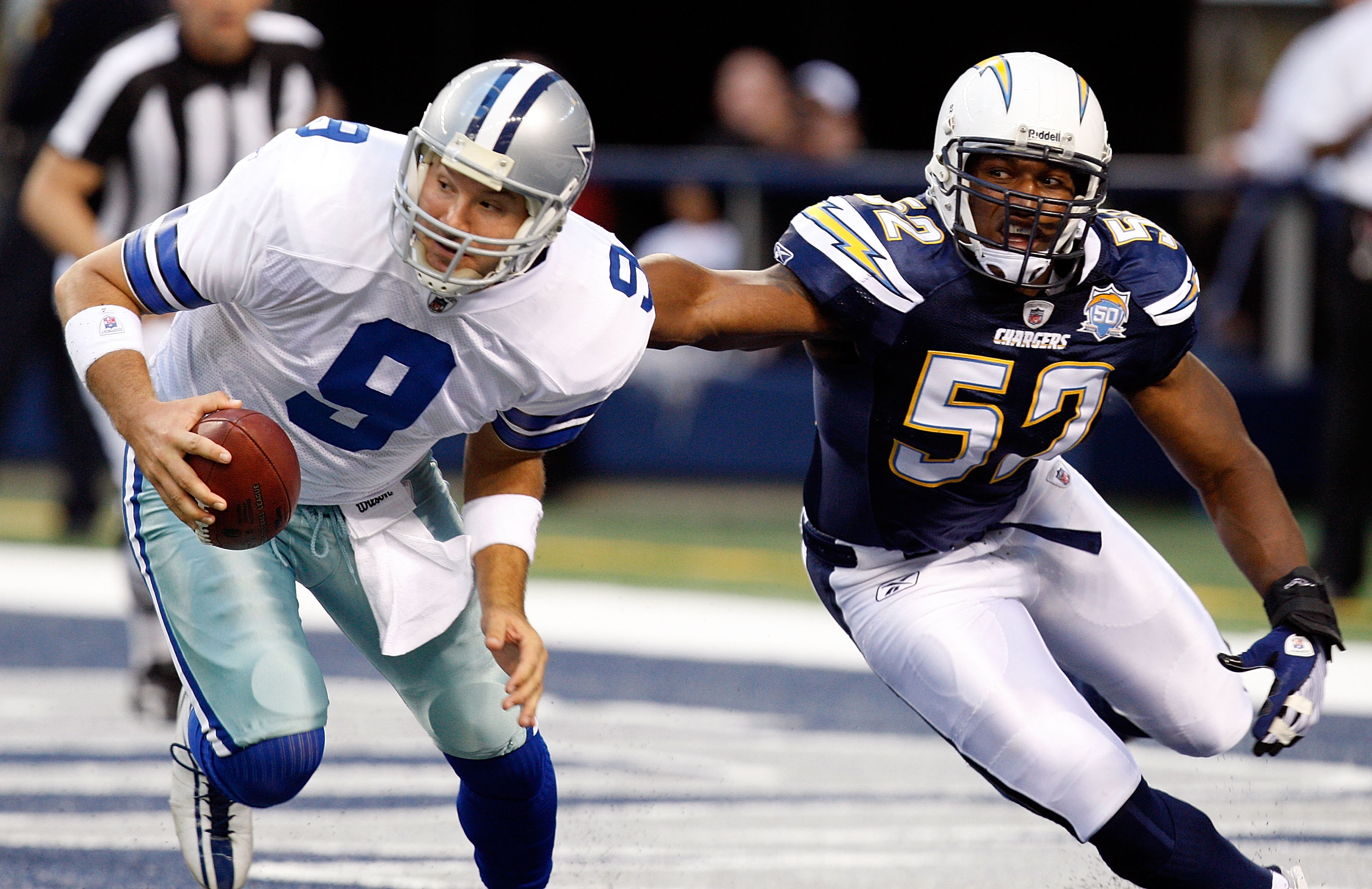 Shawne Merriman is back; however, due to an Achilles' injury that flared up at practice on Thursday, he will find himself in the same position he was last Saturday during the Bears game, sitting on the sidelines.

The Chargers defense looked sharp last Saturday. They were incredibly stingy, forcing four fumbles and one interception. The defense was also able to get to the quarter back six times.

Look for the Chargers defense to keep playing with the same intensity they showed during the Bears game and for defensive coordinator Ron Rivera to keep the offense guessing.

Does Anyone Really Miss LT? 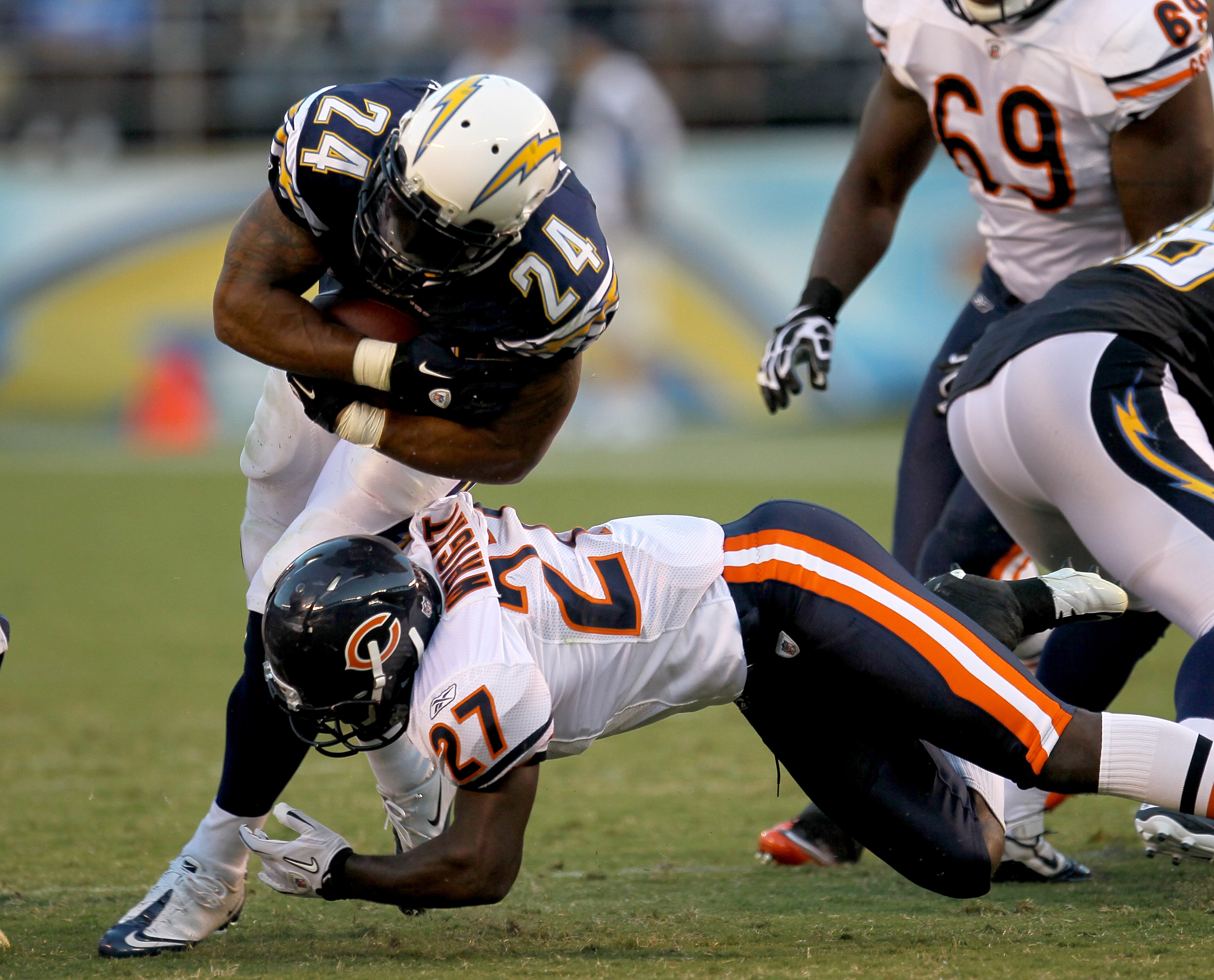 Ryan Mathews had quite a coming out party (nine carries for 50 yards). His presence on the field electrified the Chargers offense, especially when he was breaking tackles and making the defense miss.

Mathews showed lighting speed when coming off the tackle and he wasn't afraid to go right up the middle.

The Chargers don't want to take any chances with their coveted first-round draft pick. Look for Mathews to get work in the first quarter, and possibly the second quarter. It will be interesting to see if he will gain more yardage than last Saturday's game or if the Cowboys defense will be looking for him.

O-Line Shows They Can Hold It Together Without McNeill 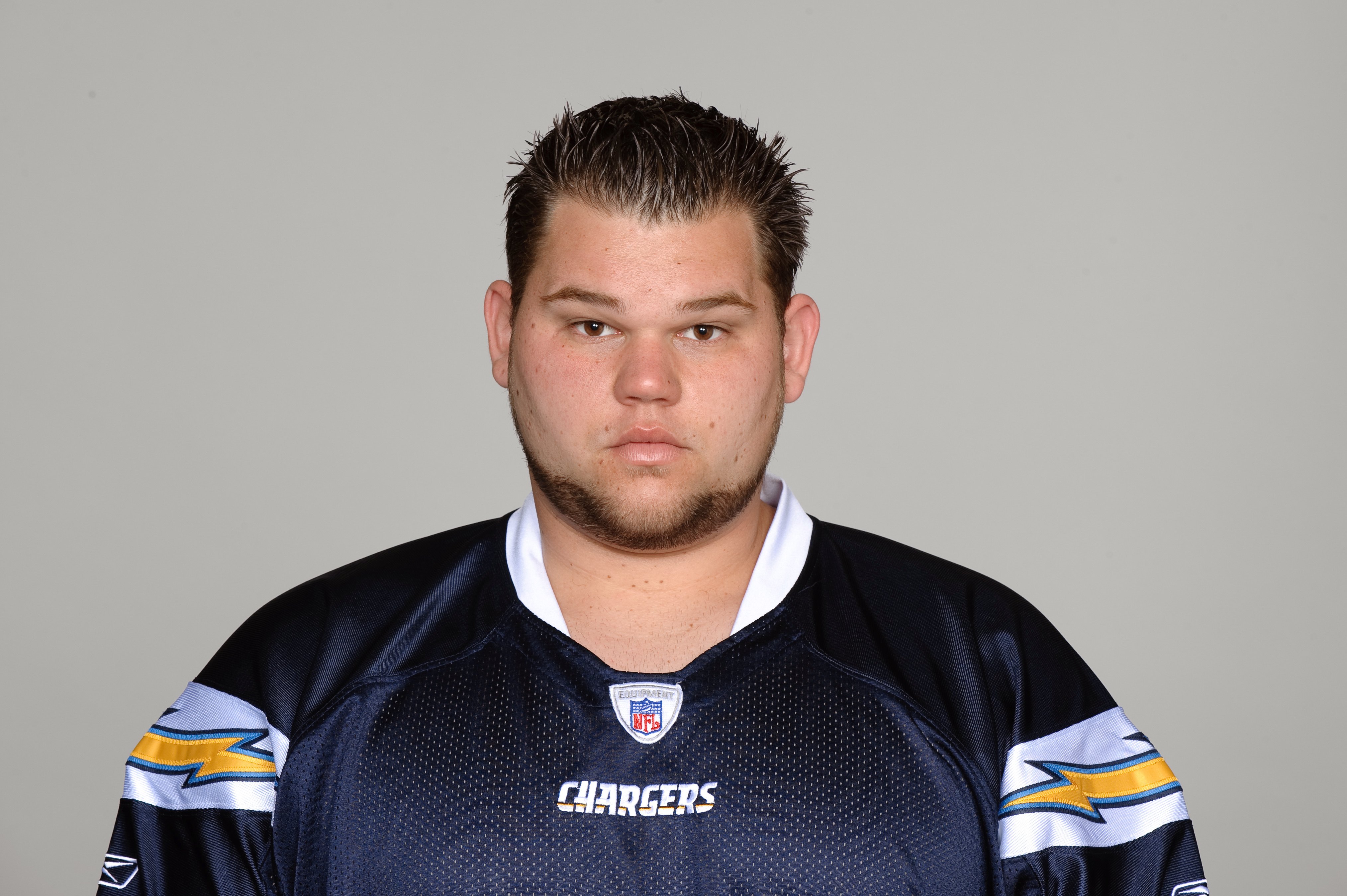 The offensive line looked solid even without Pro Bowl left tackle Marcus McNeill on the field.

The offensive line did a good job protecting Philip Rivers, giving him time to throw the ball. They even created holes for Ryan Mathews on runs up the middle and off the tackles.

Brandyn Dombrowski will get the start at left tackle against the Cowboys, but don't count out Tyronne Green, who had been working with the first-team offense all week long. 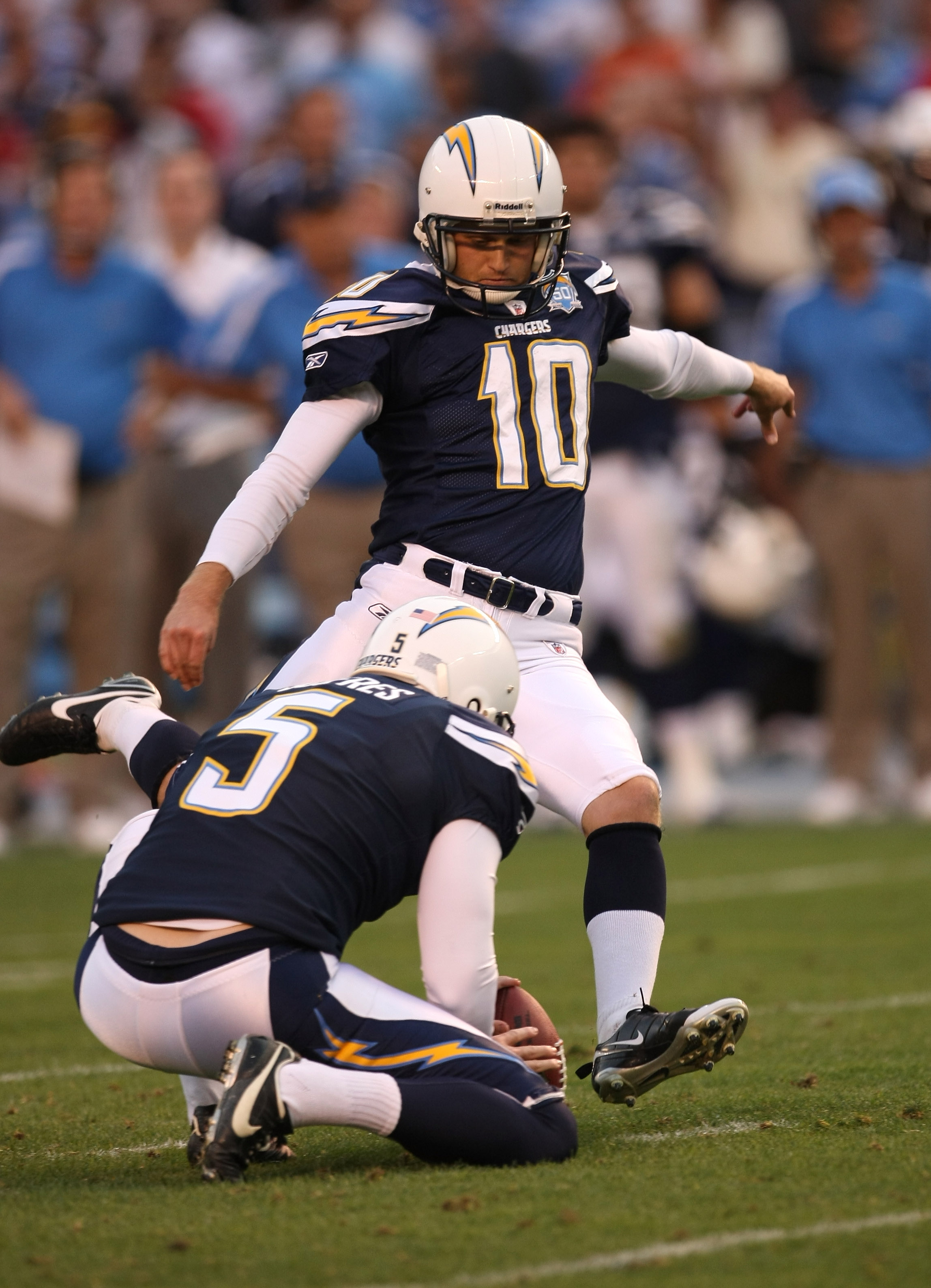 Preseason seems to bring out the best in special teams play, probably because every guy trying to make the roster is playing special teams.

Rookie kick returner/wide receiver Jeremy Williams looked incredibly sharp, and has a great burst of speed. Williams returned two kicks for 57 yards against the Bears, with his longest of the evening going for 35 yards.

Rookie linebacker Brandon Lang made an outstanding play towards the end of the third quarter. The Bears were punting deep in there own territory when Lang was able to reach punter Brad Maynard and block the kick, resulting in a safety.

Look for some more spectacular plays on special teams, including Williams busting out a big kick return for a touchdown. It's coming, I can feel it. 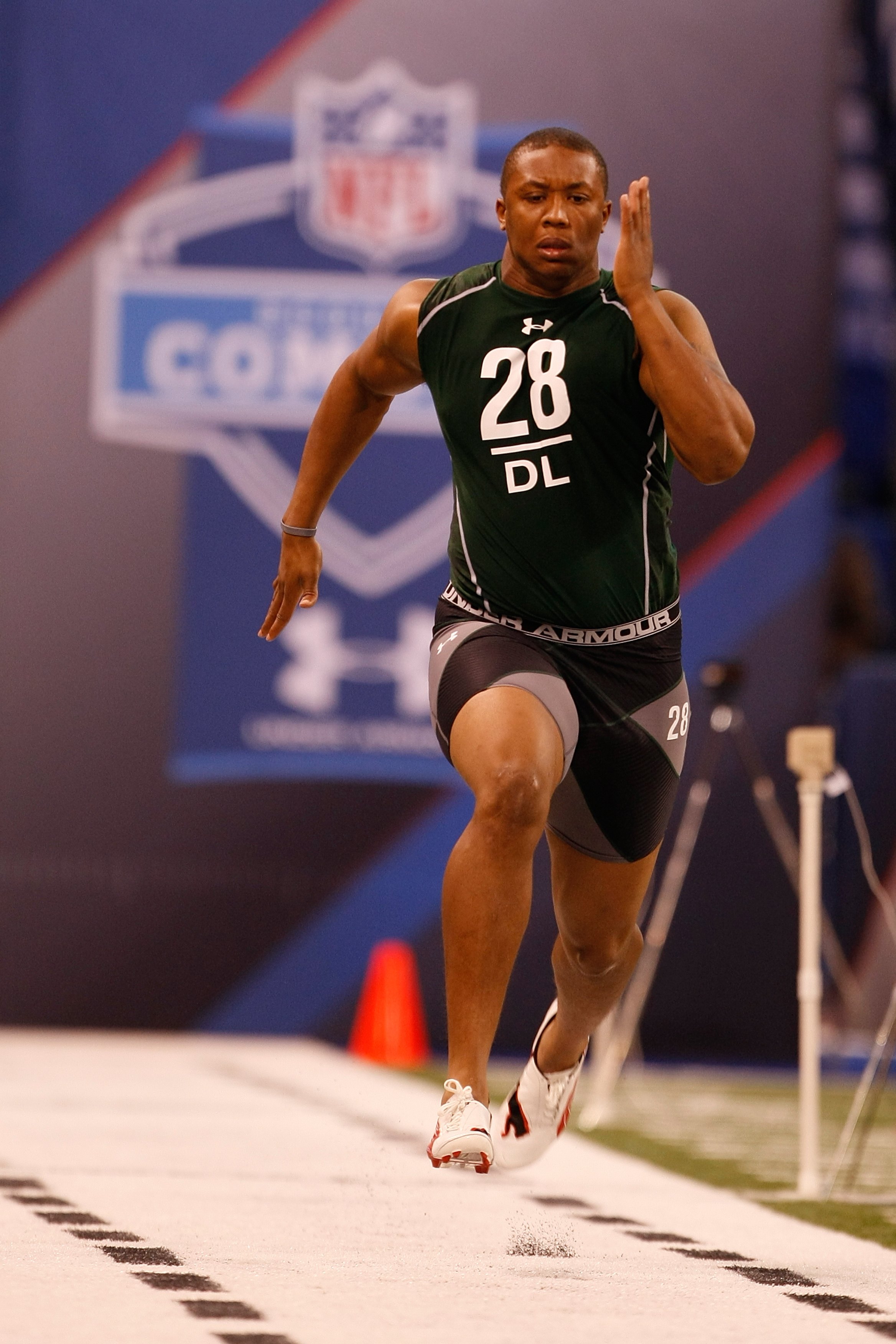 Brandon Lang, Jermey Williams, and Seyi Ajirotutu have one thing in common: they are trying to follow in the footsteps of Antonio Gates and become undrafted free agents that make the 53-man roster.

Both Lang and Williams are off to a great start. I would look to see them on the 53-man roster. Both players have great speed; Lang when going after the quarteback and Williams when returning kicks.

Lang would be a key addition to a linebacker corps that has been without Shawne Merriman all training camp and lost second-round pick Donald Butler for the season with an Achillies' injury.

Lang and Williams need to have another solid game against a Cowboys team that is a lot tougher than the Bears.

Ajirotutu, a former teammate of Ryan Mathews at Fresno State, does have solid speed and sure hands, but he has seen little action so far. If he has a solid performance against the Cowboys, look for people to start talking about him winning a roster spot. 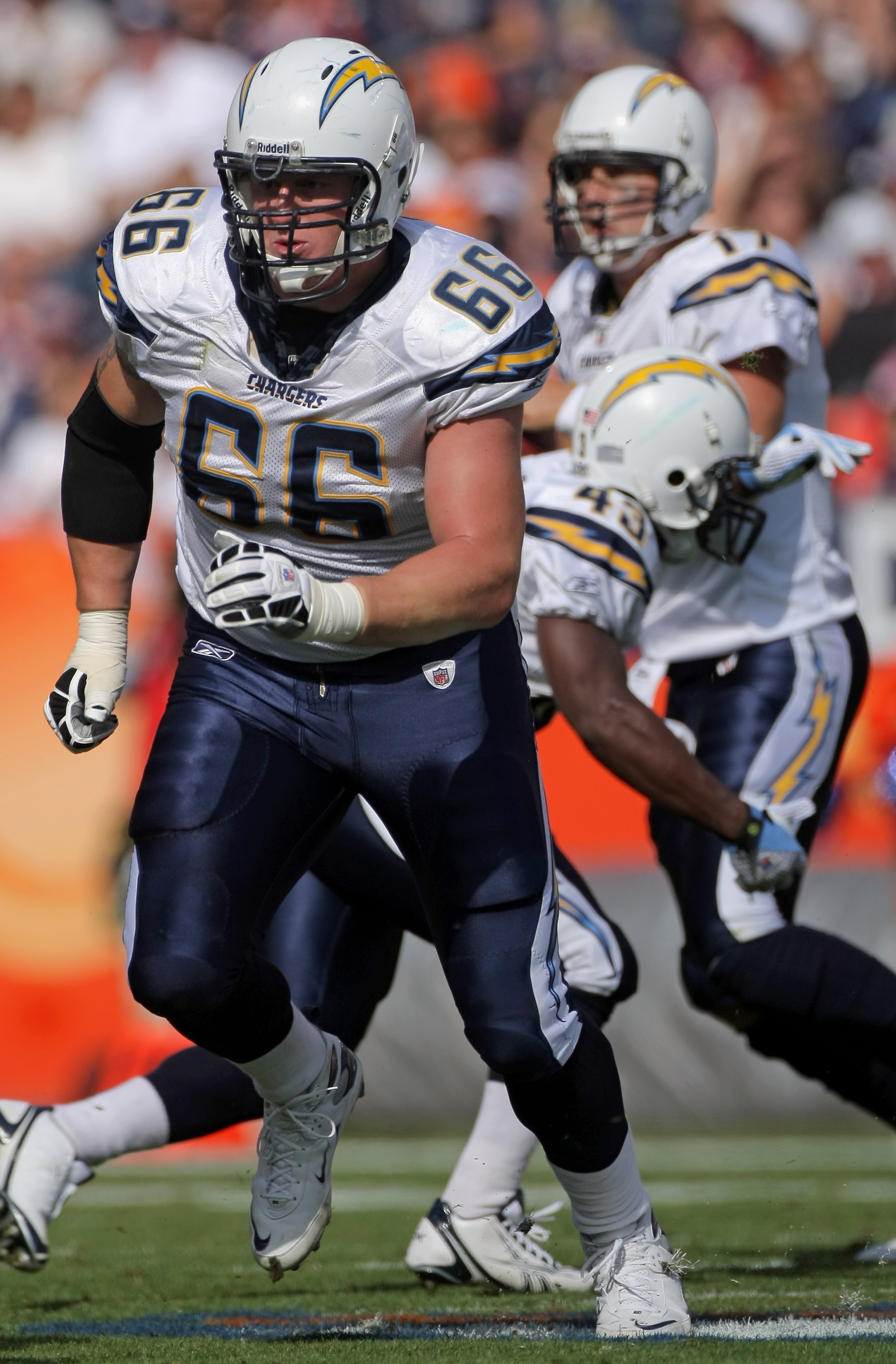 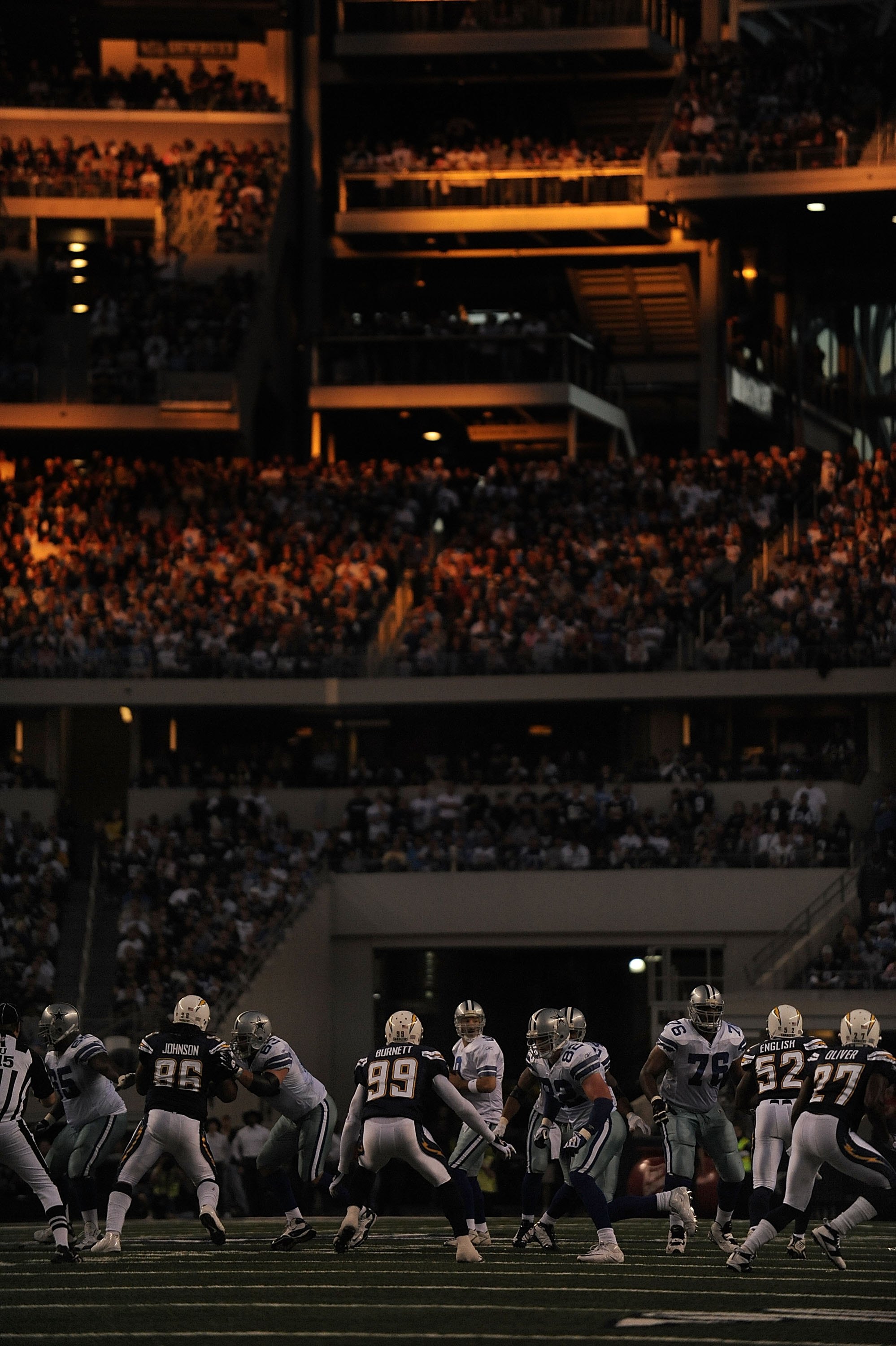 The Cowboys are going to come into San Diego looking to avenge last season's 20-17 home loss to the Chargers.

Dallas was the heavy favorite to win that game, but San Diego was riding a seven-game win streak and were focused on getting into the playoffs.

While this preseason game may be meaningless to some, (because the starters are only going to play a quarter) it would have been interesting to see both of these teams meet in the regular season again. Nonetheless, the game should be good and feature some hard-hitting action. 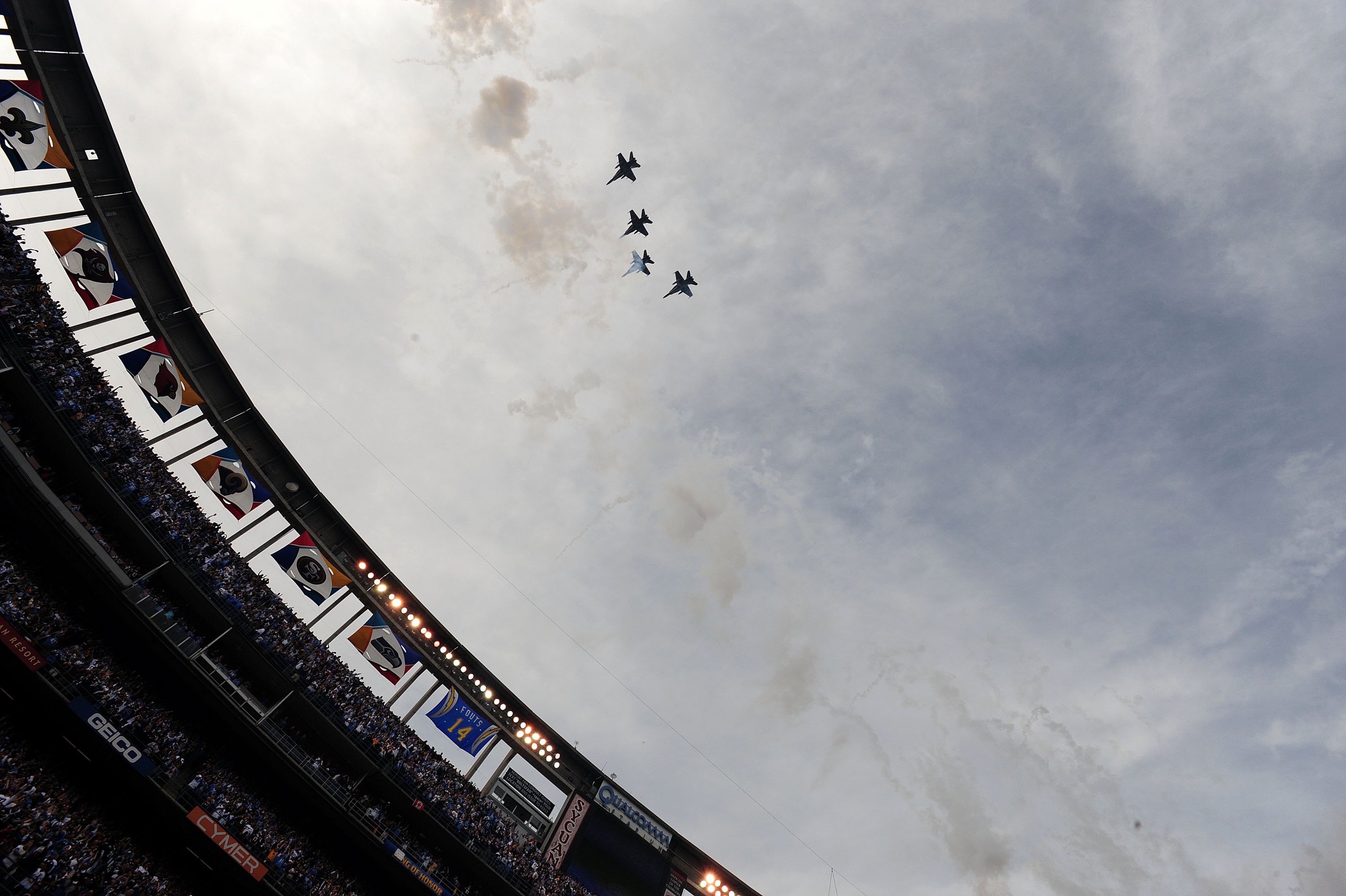 Saturday's game marks the San Diego Chargers 22nd-annual Salute to the Military. The Chargers will hold their final walk-through practice on Friday at Marine Corps Air Station Miramar, spending time with servicemen and women, including those in the Wounded Warrior program.

This game will be a special delight for those service members in attendance, especially for those who may be deploying to Afghanistan in the near future.

I'm glad this year's game features the Cowboys, because there are many Marines and Sailors that follow the Cowboys, but have also adopted the Chargers as their team as well.