Rolando McClain was well known by NFL fans long before the 2010 NFL draft. Raider Nation knew who he was, and what to expect from him from day one. He appears to be delivering early on in his career.

Therefore, it won't be all that shocking for McClain to do well and contribute to the Raiders in 2010.

Every year there are players that most people have never heard of that explode onto the NFL scene to become rookie sleepers and household names. The 2010 season should be no exception. Every team selected players later in the draft they feel will be great.

What about the rookies selected by the silver and black? Who are these young men, and what should Raider fans expect to see from them? Can they make an instant impact? Will they?

Let's take a look at some of the rookies that are not being talked about outside the Raider community that have an opportunity to make a name for themselves in their first year of competition. 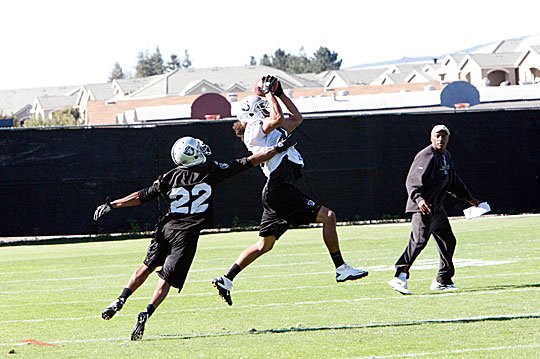 Taken with the 138th overall pick in the 2010 NFL draft, Walter McFadden comes to Oakland with a lot of potential.

McFadden has good size, speed, and man-to-man cover skills. This makes him a great fit in the Raiders' primarily zero-coverage scheme.

In the first preseason game against the Dallas Cowboys, McFadden played pretty well against the third and fourth wide receivers of the Cowboys.

In training camp, McFadden is giving incumbent nickel corner Stanford Routt all he can handle in the way of competition.

It's very possible that McFadden could unseat Routt, get significant playing time, and make some real noise when the regular season starts.

That would shock a lot of people. 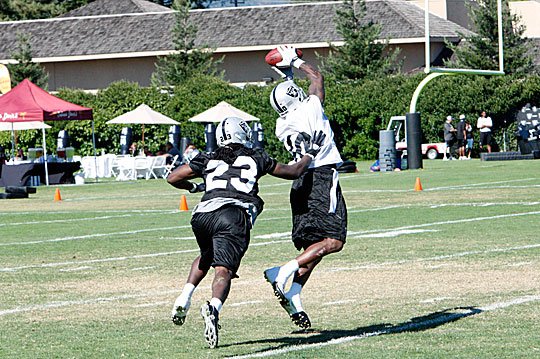 Jeremy Ware prevents the receiver from getting any yards after catch.

Jeremy Ware did not get a lot of press coming out of Michigan State. He's best known for his hitting skills.

This kid can bring the pain.

One thing that gets overlooked is Ware's ability to cover one on one. He showed in the Dallas game last Thursday that he can stick to a receiver. Again, man-to-man coverage is a staple in the Raiders' defensive scheme, and Ware appears to be more than capable.

Ware, like the aforementioned McFadden, has a legitimate chance to push incumbent nickel corner Routt out of the way and take his place on the field.

Even if he can't beat out McFadden to play in the Nickel formation, he could still move ahead of Routt and get time as the fourth cornerback in the dime package.

A seventh-round pick taking over the third or fourth cornerback spot ahead of a six-year veteran would be truly shocking, but it is entirely possible. 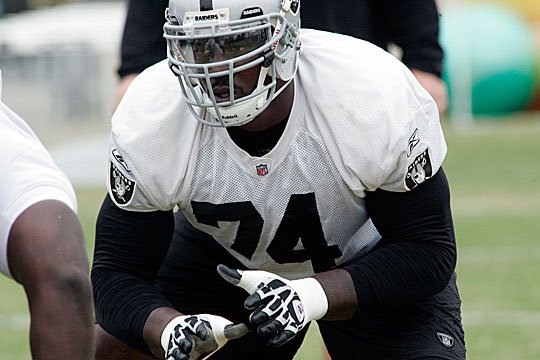 Following an explosive performance at the NFL Rookie Combine, Bruce Campbell does not fit the criteria for an unheard of player. However, there are two words that could be used to describe this first-year offensive lineman.

This is a guy that many "experts" felt Al Davis and the Raiders would reach for in the first round of the draft. This didn't happen—they waited until the fourth round. This means Campbell was a great value pick for the Raiders.

Campbell took over at right guard for veteran Cooper Carlisle in the preseason game against the Cowboys and played very well. In fact, he looked a lot better than Carlisle—especially on outside runs in which the guard was expected to pull out and lead the play.

If Carlisle continues to play as poorly as he did last season, or as bad as he did against the Cowboys last week, Campbell could find himself in the starting lineup for the silver and black when September finally arrives.

A fourth-round "workout warrior" beating out an 11-year veteran like Carlisle would indeed shock the world. 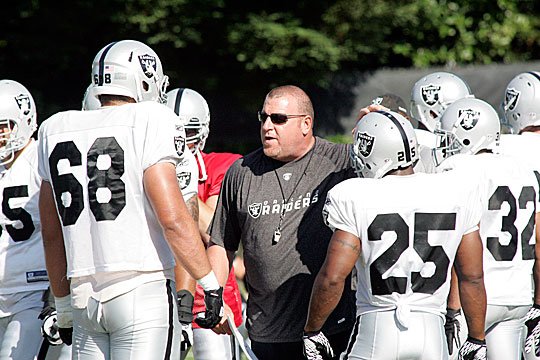 In his first action of the 2010 preseason, Veldheer played extremely well against some good competition in Cowboys' nose tackle Junior Saivii.

Current starting center Samson Satele looked pretty bad in Dallas. However, Veldheer showed that he was not at all intimidated by the better competition of the NFL, learning a new position, and he was able to stonewall the Dallas pass rush.

If Satele doesn't make significant improvement over the next few weeks, it is entirely possible that Veldheer will get the start come opening day in Tennessee against the Titans.

A third-round pick from a Division II school unseating a veteran of four years would shock most of the NFL world. 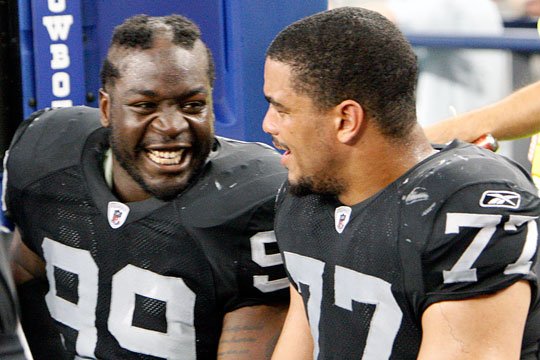 Lamarr Houston on the sideline in Dallas sporting his "rookie do."

Second-round draft pick Lamarr Houston isn't unknown to Raider fans. After the first quarter last Thursday, the Cowboys and their fans know who he is too. Houston got two sacks against the Cowboys' starters.

Houston comes from the University of Texas where he put up better statistics than both Ndamukong Suh and Gerald McCoy, although Houston got none of the press. Why is this important to Raider fans? Because now Houston has something to prove.

A chip on the shoulder of a 300-pound former fullback is a dangerous thing for opponents.

Already cemented as the starter at left defensive end, Houston has immediately improved the Raiders anemic run defense. The Cowboys got just 66 yards rushing and averaged only three yards per attempt. This was due in no small part to Houston locking down the point of attack on his side.

There is no reason whatsoever to think that Houston can't put up some serious numbers and shock the non-Raider NFL world. 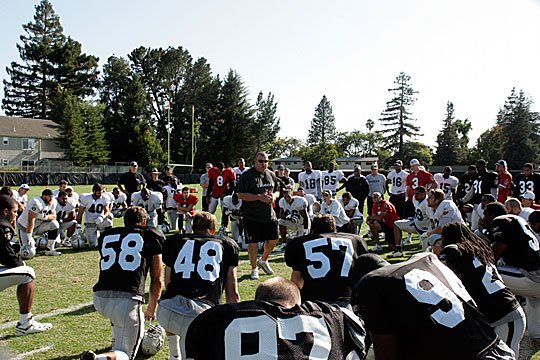 Head coach Tom Cable addresses the team at the end of practice.

When the 2010 regular season starts, some of the rookies I've discussed will be in the starting lineup—some won't.

Either way, they will all get their opportunity to prove themselves in practice and preseason games. Those that shine will play. Those that don't will sit on the bench, get cut, or be relegated to the practice squad.

The ones that get considerable playing time will be presented with an opportunity that few get—a chance to play well, help the Raiders win, and shock the world.

Can they shock the world? Yes. Will they? Only time will tell.

On an unrelated note:

I would like to thank each and every member of Raider Nation for their support. I have been on BleacherReport for only five-and-a-half months, but I'm already less than 500 reads away from reaching the milestone of a quarter of a million reads.

It makes me feel truly blessed and honored that, with all the options on the Internet, you would consistently read my work. It's gratifying and humbling all at the same time.

It means a lot to me and I know that it would not be possible without the Raider Nation having my back.