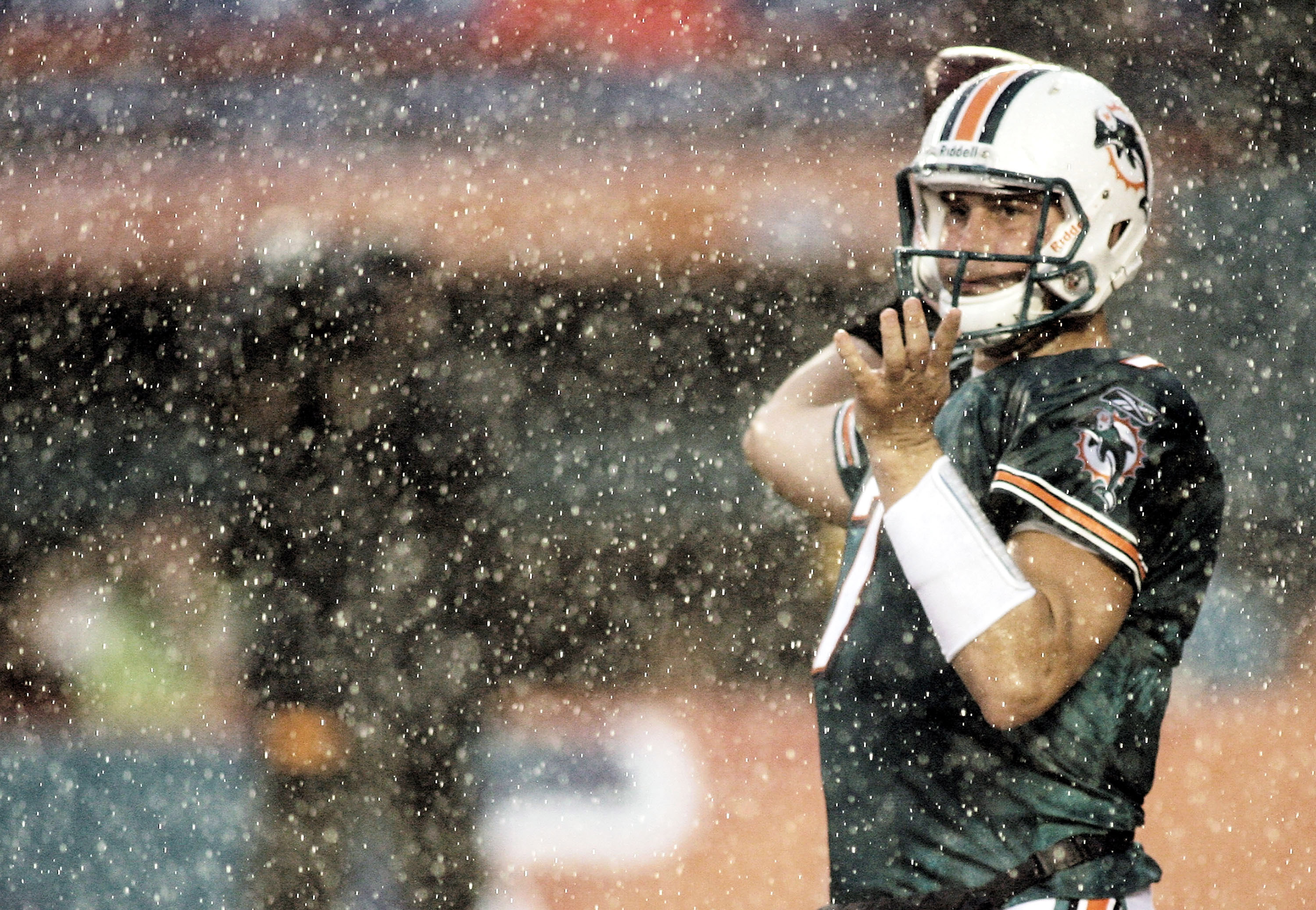 For much of their preseason debut, the Miami Dolphins looked as sloppy as the surface of Sun Life Stadium.

As a monsoon rushed down over Miami on Saturday night, the Dolphins starters failed to navigate through the slushy quagmire of a field, leaving its second and third unit players to pick up the wreckage and inch out a 10-7 victory over the Tampa Bay Bucs.

But, as bad as the starters looked on Saturday, there's good news, Dolfans.

It's the preseason.  The games don't count and players are shaking off rust.

There's cause to be concerned, of course, but this team still has almost an entire month to sort through its issues and shortcomings.

Still, there was plenty to be taken out of Saturday's game, some good, and some bad.

We Still Don't Know Much About The First Team Offense 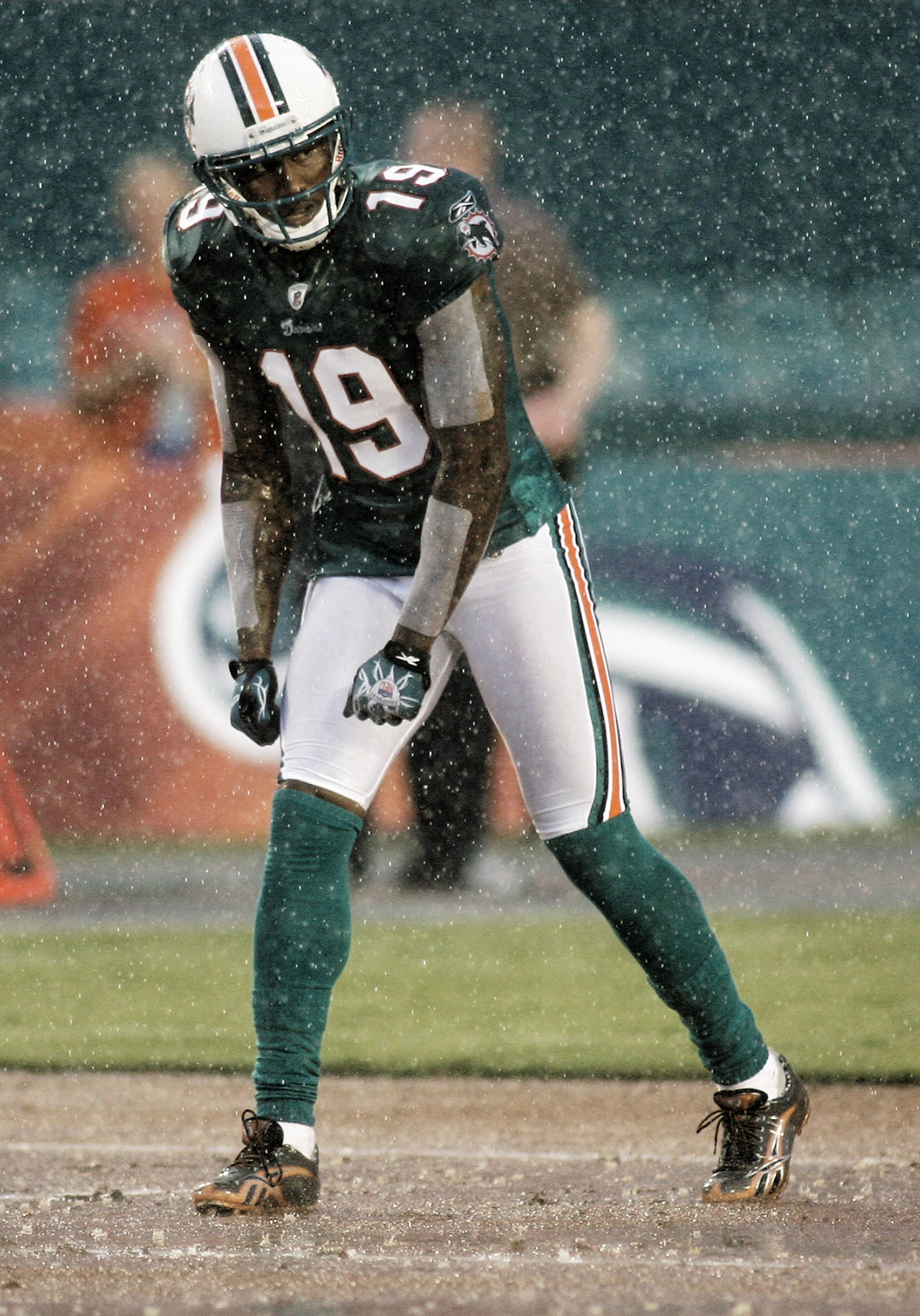 Preseason games rarely provide too much valuable information, and this one was no different.

Chad Henne struggled with a wet ball, losing the grip on a few passes that fortunately fell incomplete.

Brandon Marshall dropped two passes, Ricky Williams and Ronnie Brown struggled to muster up any explosiveness, and the offensive line struggled to hold down a young Tampa Bay defense.

We'll get a better look at this unit next week, but this poor performance must serve as a reminder that the Dolphins offense might not be Super Bowl-ready quite yet. 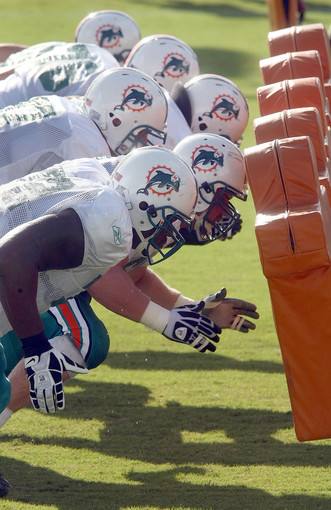 Although they had to fight through the muck of the Marlins infield for much of their time on the field, there is no real excuse for their poor play.  Miami's starting running backs, Brown and Williams, mustered up just 30 yards on eight carries, although part of their struggle should also be attributed to their own mishaps.

Still, stats aside, the line looked very sub par from a spectator's eye.

Fortunately, it is still early, and the Dolphins are still shuffling players in and out of the starting guard spots.  And don't forget two potential starters sat out Saturday's game. 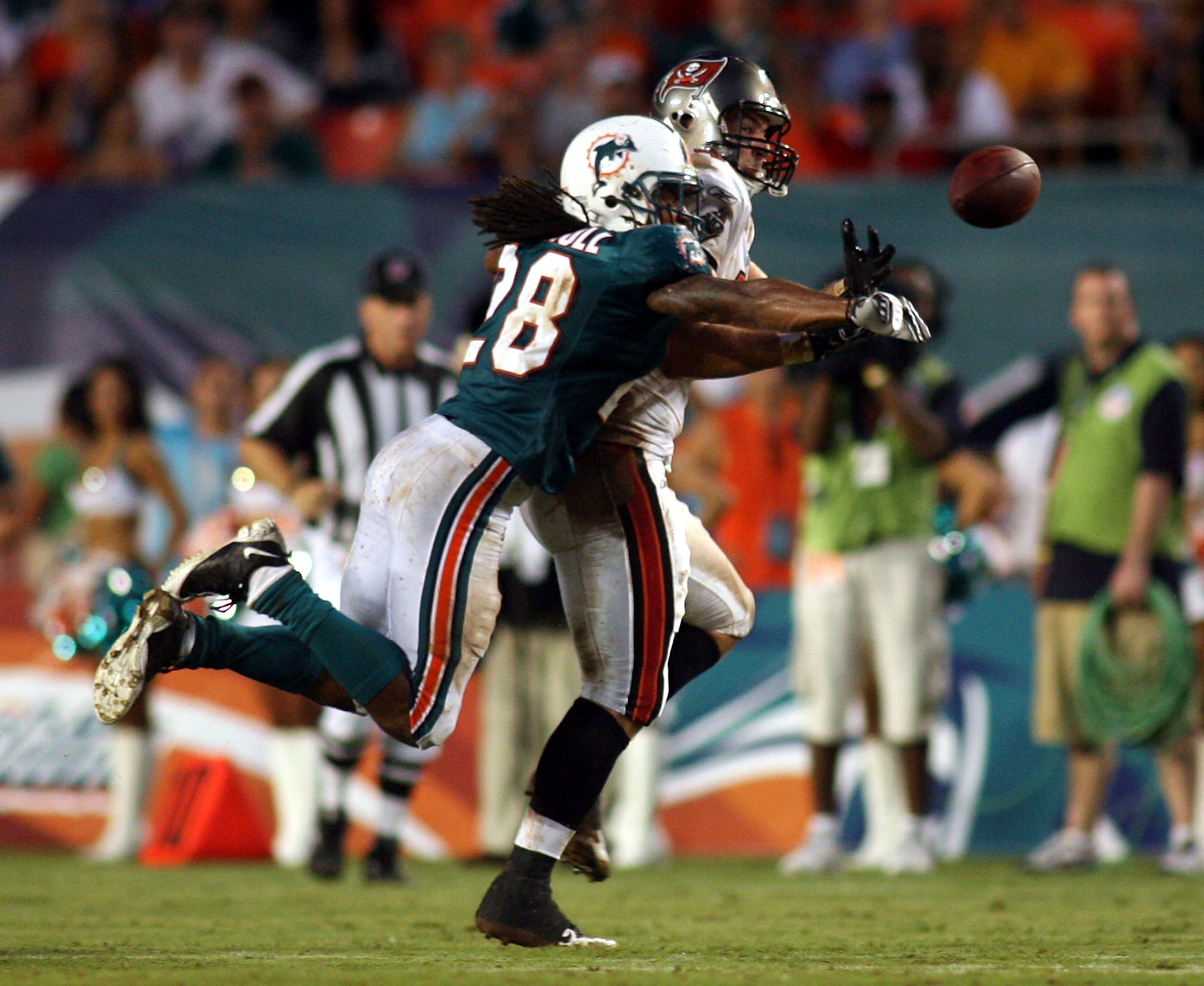 Nolan Carroll is gaining some serious steam as training camp progresses.  The fifth round pick has been making local headlines with his standout play in practice, and he lived up to the hype on Saturday.

Carroll took reps with the first team defense as a nickel-back in place of the injured Will Allen.

The Dolphins gave Carroll the nod over Jason Allen who is competing for the spot as well.  There's a chance Miami gave Carroll the spot just to gauge how he would handle the situation, but he delivered either way.

Carroll looked poised beyond his years and maintained solid play when he stepped up as a primary corner with the second team unit.

With Will Allen struggling to reach full health a year after an ACL tear, Carroll is beginning to look more and more like a possible role player for the Dolphins. 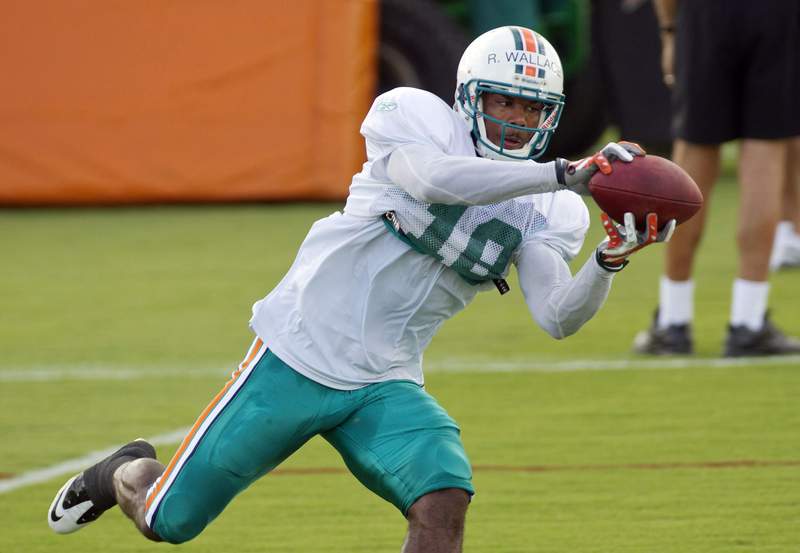 The spotlight was beaming down on second year wide receiver Patrick Turner on Saturday, and he responded.

Turner grabbed two catches including a 34 yard reception from Tyler Thigpen.  He finished the night as the team's leading receiver, a small, but positive step towards his growth and chances of making the roster.

Still, Turner has a long way to go before he can get comfortable in a Dolphins uniform, and undrafted free agent Roberto Wallace is still providing stiff competition.

Wallace caught just one pass for eight yards on Saturday, but reports have maintained throughout camp that he is challenging Turner for the fifth wide receiver spot on the roster.

Patrick Turner's potential is sky high, but Wallace, Moore, and Pruitt all have a fair chance of making the roster. 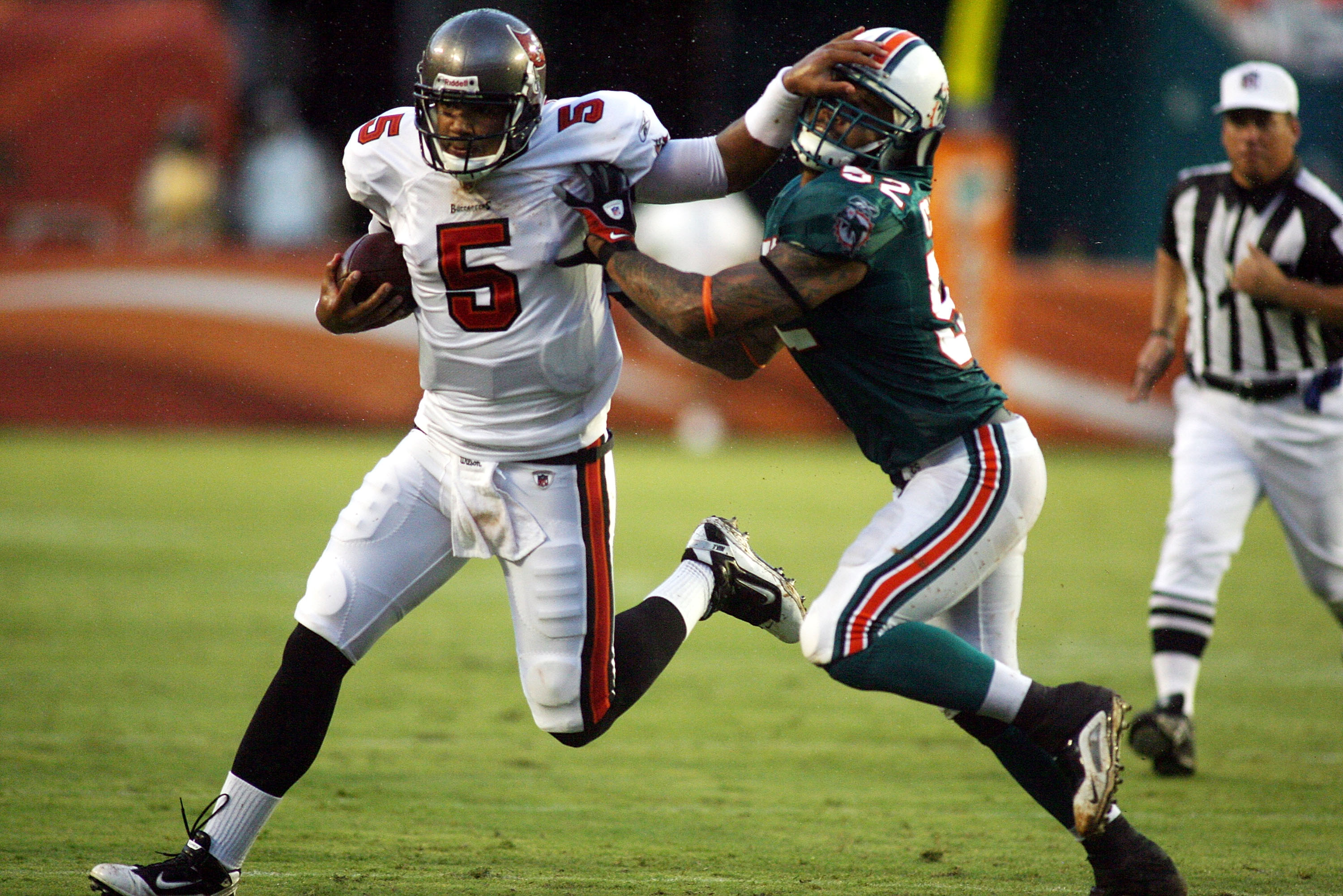 Many hoped that the signing of Karlos Dansby would allow Channing Crowder to replicate the promise he showed during his time playing alongside Zach Thomas.

And that he did.

Crowder was all over the field on Saturday, and finished his brief night with three solo tackles including one for a loss.  Granted, he made his share of mistakes, but Crowder looked to be much more of a presence than we have seen from him in years past.

The Karlos Dansby signing has not only brought one of the league's best linebackers on board, but might also have resurrected the career of another. 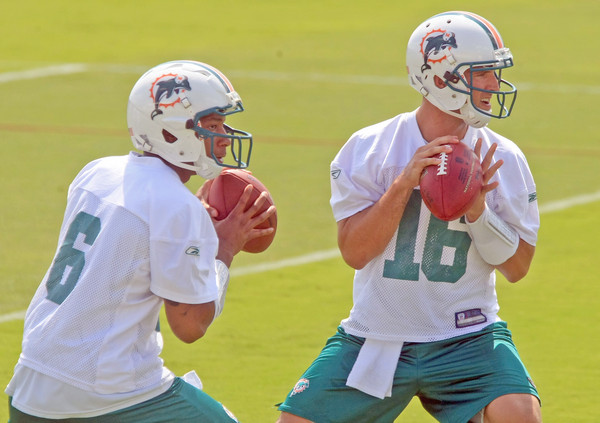 Tyler Thigpen's had a little bit of a Jekyll and Hyde night on Saturday.  The Dolphins back up quarterback showed a puzzling mix of promise and mediocrity.

Thigpen struggled mightily on a few of his 19 pass attempts, however, much of that can be attributed to the offensive line's struggles.

The positives did seem to outweigh the negatives, though.  He finished the night with 10 completions for 145 yards, and tossed a handful of gorgeous deep balls that had the Tampa Bay secondary on its heels.

Thigpen definitely has more practical value than Pat White, but the Dolphins may not want to keep four quarterbacks on the roster.  The team might have been showcasing Thigpen for a trade, but if he keeps playing well, he will likely remain with the team. 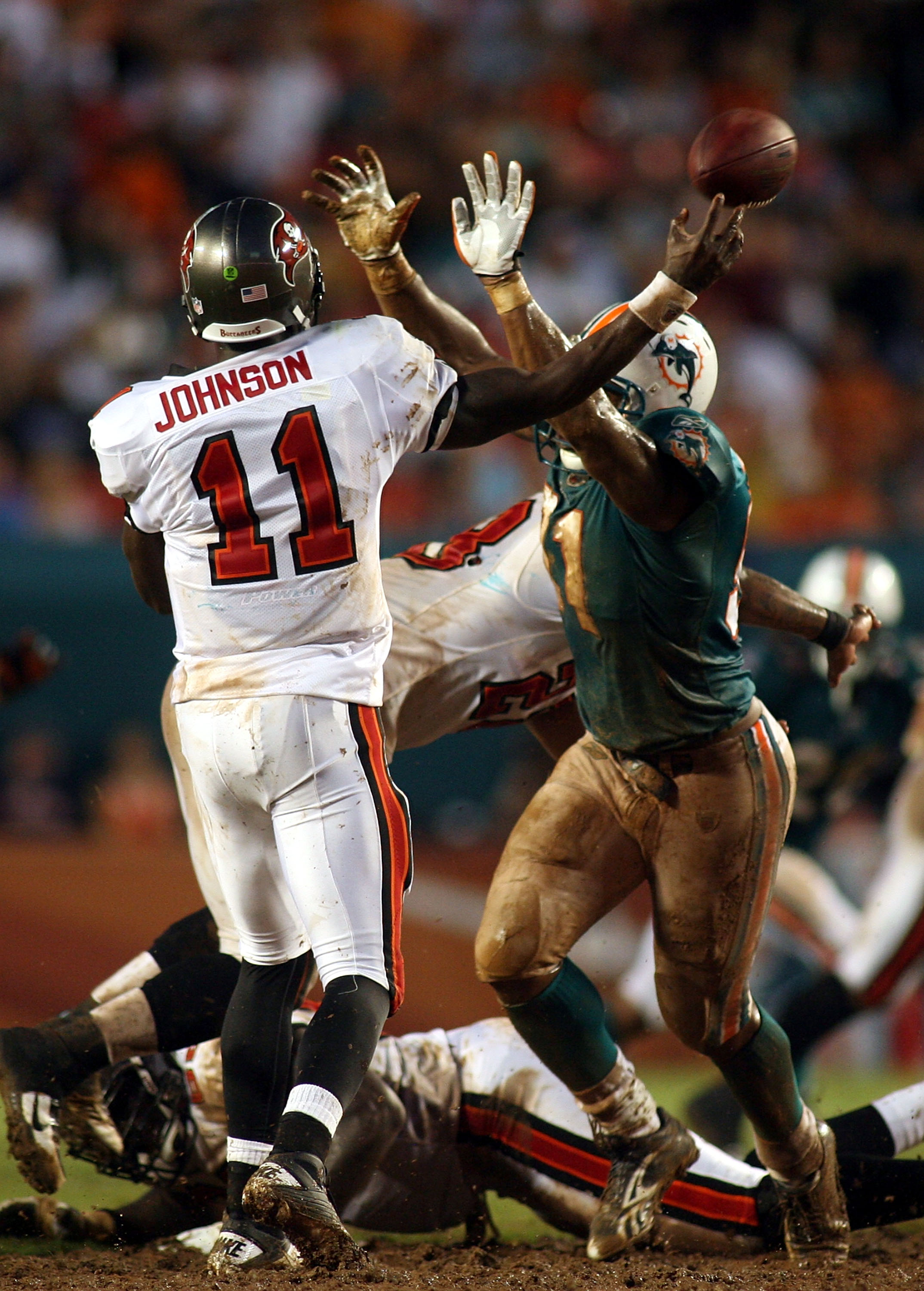 The Dolphins marched out four new starters with the first team front seven on Saturday, and the results were mixed.

Cameron Wake was manhandled on a handful plays, but was an absolute monster on others. He finished the game with just one tackle, but he seemed to force his way into the backfield on many occasions.

Unfortunately, the Bucs were able to successfully run the ball despite the horrible conditions.  They finished the game with 139 rushing yards (not all against the first unit, of course) which should serve as a stern reminder that they need plenty of work before they reach regular season form.

Mike Nolan and the Dolphins absolutely need this unit to mesh into an elite one if they wish to successfully implement Nolan's "offensive defense."

Nate Ness Is a Playmaker 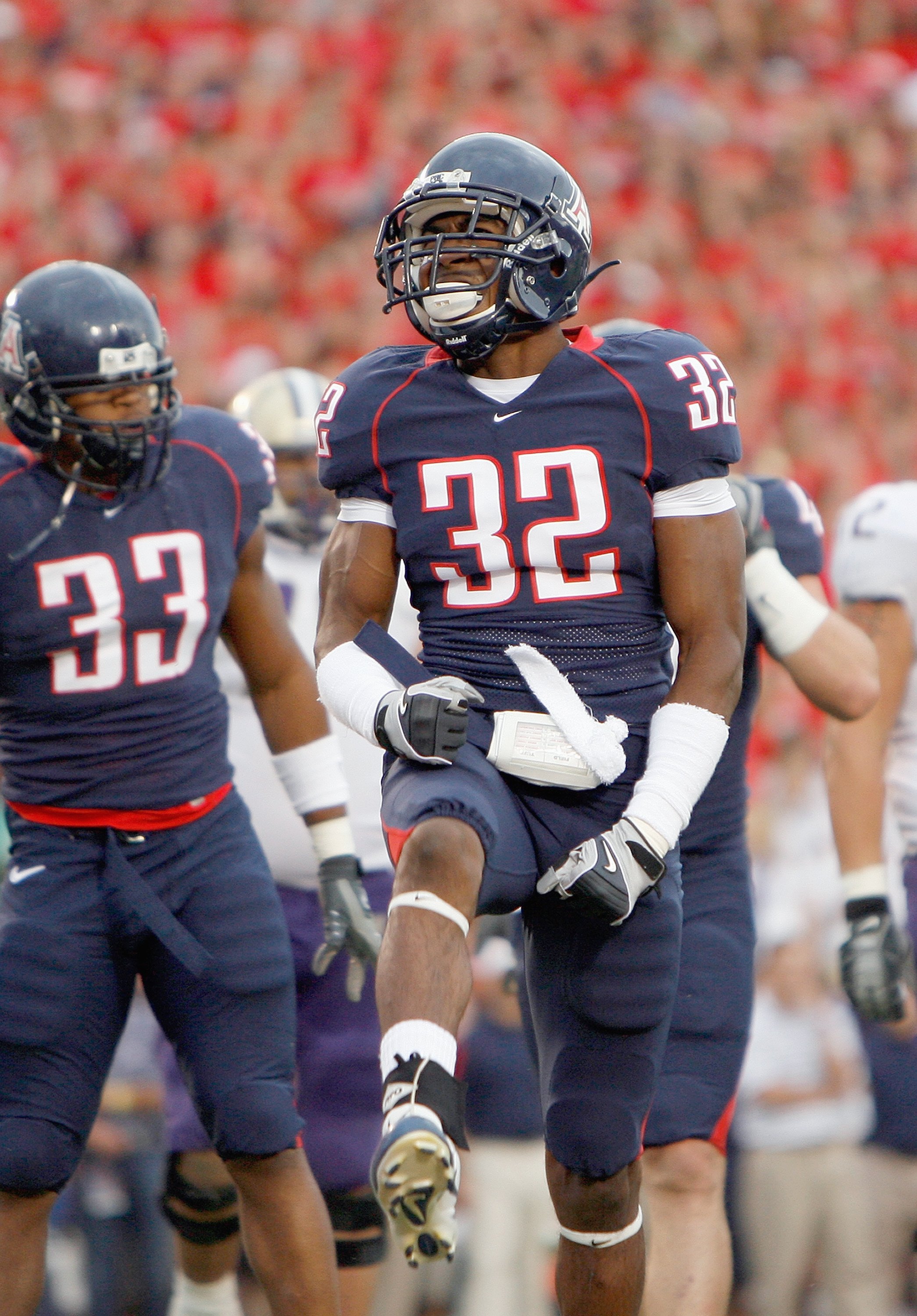 Second year safety Nate Ness had arguably the best game of any Dolphin on Saturday.

Miami brought in the former undrafted free agent to provide competition and depth at safety, but now he looks like a legitimate threat to make the roster.

Ness came in with the second team and had a tremendous night, totaling four tackles and a whopping three pass deflections.  He made a crucial pass deflection in the end zone late in the game that prevented a Tampa Bay touchdown.

Chris Clemons is, barring any miracles, the sure fire starter at free safety, but Ness looks like he could serve as a great back up and special teams playmaker.

Pat White Will Get His Chance To Shine Next Week 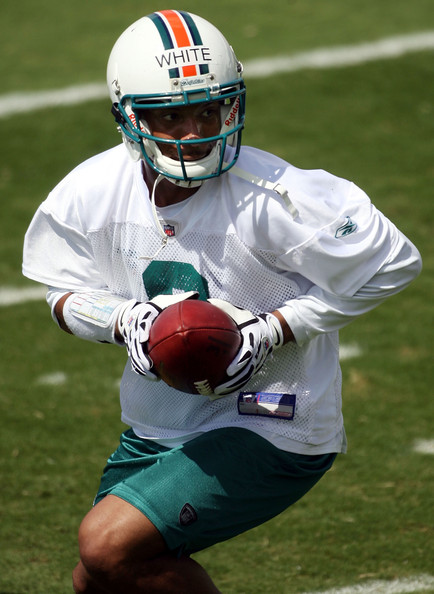 The Dolphins gave Tyler Thigpen a lengthy chance to shine on Saturday, leading us to believe that Pat White will get his chance next Saturday when Miami heads up to Jacksonville to face the Jaguars.

Needless to say, White is under immense pressure to start showing some NFL skill.  Dolphins fans' patience has already worn rather thin with White, making his Preseason debut all the much more important.

And, after Tyler Thigpen's overall solid performance on Saturday, White needs to prove that he can be an NFL quarterback and prove he is worth a roster spot. 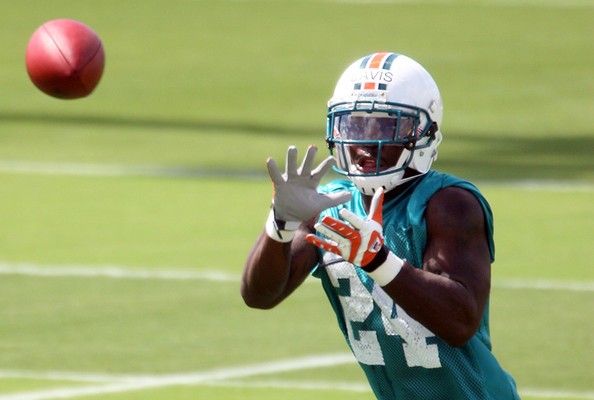 This offseason was filled with hope that sophomore corners Vontae Davis and Sean Smith would progress into lock-down corners.

There's still hope that may happen, but if Saturday's game is any indication of their progress, they still have a very long way to go.

Davis was gave up a 30 yard pass to rookie wideout Mike Williams that should definitely have been batted down.

Smith also had his struggles, and surrendered an 18 yard touchdown pass to Sammie Stroughter.  He managed to intercept a pass later in the game, but his mishaps left plenty of concern.

It's important to remember this was the team's first preseason game, but considering these two struggled against one of the league's most dismal passing games, (anchored by a sophomore quarterback and two rookie wide receivers) expectations for Davis and Smith must be tempered.