Can Henrik Sedin defend his Art Ross Trophy in the upcoming 2010-2011 season?

Long Answer: It is possible, but the odds are against him.

This no knock against Henrik, but there hasn’t been a repeat winner of the Art Ross in almost a decade.

Looking at this list of past winners, since the lockout it has taken at least 112 points to earn the scoring title.

Henrik will turn 30 this September, and is just entering the prime of his career after a bit of a slow start in the NHL.

Henrik’s history in the NHL shows two key traits which can help him defend his Art Ross Trophy.

First, only once (2007-2008) in his 9 year career has he regressed from his previous years point totals. Usually he shows incremental improvements, with the occasional large jump in production.

And in 2009-2010, his points jumped again from 82 to 112 after finally signing a new contract that paid him a like legitimate NHL first liner. Unlike the stereotype, Henrik increased his production, rather than slumping, after signing the new contract.

Second, Henrik has been extremely durable, having missed a grand total of 10 games due to injury in his career.

Henrik has played in every single regular season and playoff game for the Canucks since the lockout. The Canucks have players who miss 10 games before the Christmas break on a regular basis.

Henrik also evolved his game last season, looking to shoot more rather than always looking for the perfect pass. This added element to his game saw him score a career high 29 goals, and makes him more than the one dimensional playmaker in the offensive zone that he was earlier in his career.

However, I could name at least 10 other players who could reasonably put up that many points next season.

Some have done it already in the past (St. Louis, Thornton, Crosby, Ovechkin, Malkin) and others who could potentially continue their progression into this elite status (Daniel Sedin, Jonathan Toews, Patrick Kane, Nicklas Backstrom, Steven Stamkos).

Winning the scoring title takes a bit of luck. You have to avoid injuries both to yourself and your linemates, and get some lucky bounces going your way.

Case in point, Henrik won it on the final weekend of the 2009-2010 season, when he had a 4 point night vs Calgary, and Ovechkin went pointless in his last game. If Ovechkin would have not missed games due to injury and suspension, or if Calgary had played with a little more pride after being mathematically eliminated from the playoffs, then maybe Ovechkin would have won the scoring title.

Bottom line, if Henrik puts up the points he is capable of, he’ll be in contention for the scoring title again down the stretch. And even if he doesn’t win the Art Ross, I don’t think any Canucks fans would complain if he put up 112 points again.

PS. You might have noticed that I listed Daniel Sedin as a threat to win the Art Ross as well.

Last season he had the same points per game as Henrik (1.36 points per game), and finished 12th in overall scoring, despite playing only 63 games due to a broken foot.

If Daniel and Henrik can come back at the same pace this year, we could see a scoring race that involves both the twins.

And really, wouldn’t it be fitting for Daniel to follow in the footsteps of his older (6 minutes older) twin Henrik, and win the Art Ross Trophy?

Ed Willes
via The Province

Sippin On A Coffee | Really, Ottawa? They Don’t Even Have Fans 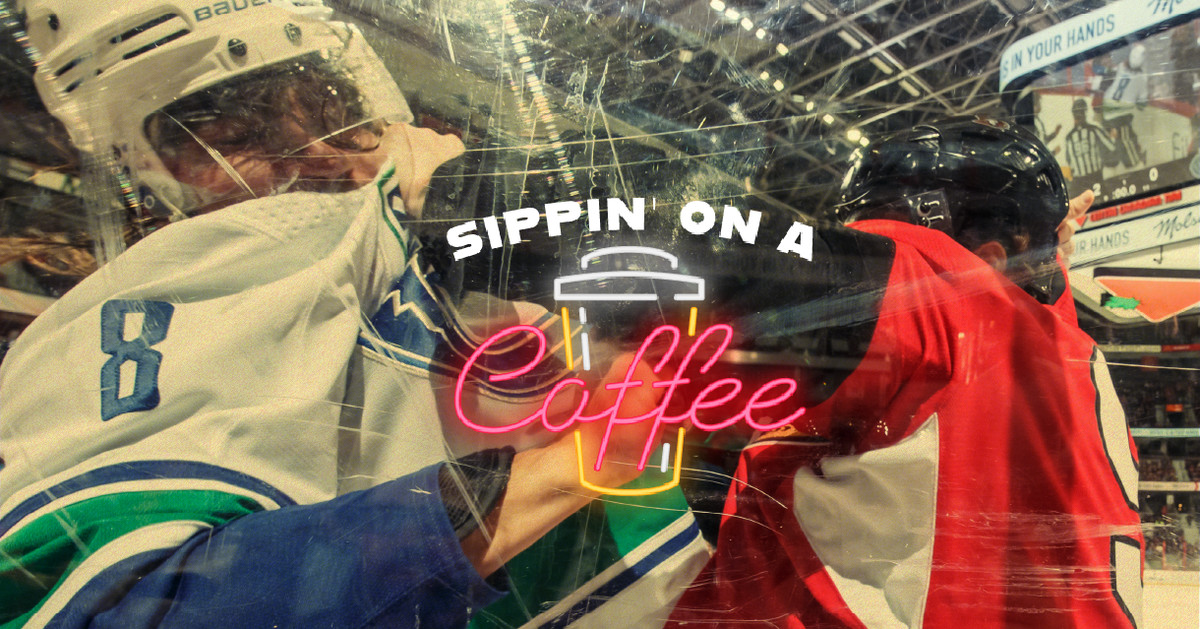 Sippin On A Coffee | Really, Ottawa? They Don’t Even Have Fans