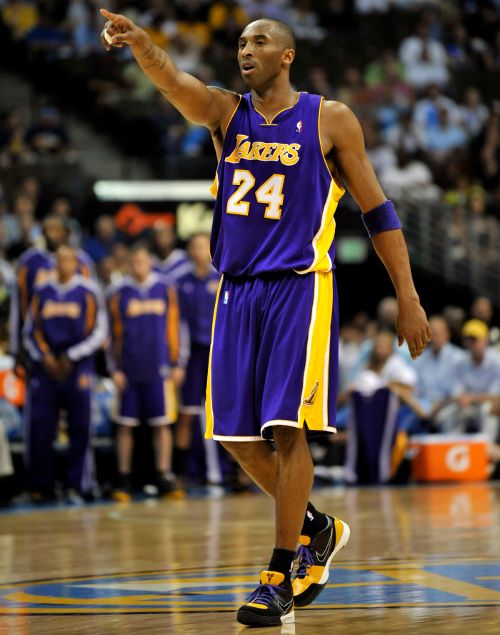 The Los Angeles Lakers are living the good life right now. The organization has just won its second straight championship and 16th overall.

They have the deadliest duo in the NBA right now with the best big man in Pau Gasol and the best overall player, Kobe Bryant.

Mitch Kupchak and the front office of the Lakers did a great job in stockpiling talent that would fit the core of the team. They re-signed an important piece of the team in Derek Fisher and signed a more than adequate backup in Steve Blake.

They then added to their payroll by acquiring Matt Barnes on the cheap and signing a proven veteran in Theo Ratliff. Mitch also drafted two potential steals in Devin Ebanks and Derrick Caracter, who were both late second-round picks.

Everything is looking sunny in L.A. right now, but as the defending champs continue to get better, so does the rest of the league. Teams are stockpiling talent in order to dethrone the Lakers.

They're tired of seeing them at the top and intend to put a stop to their championship aspirations this season. Here is a list of teams in the NBA and what they have done during this offseason in order to prevent the Lakers from three-peating. 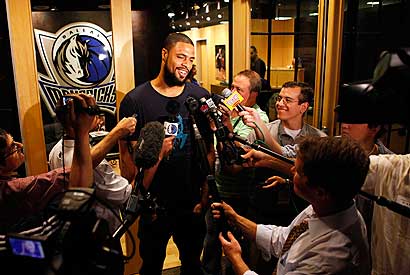 The Dallas Mavericks have been a consistent 50-win team for more than a decade. Despite their success in the regular season, they don't seem to excel in the playoffs.

They have a deep roster that is meant for winning now, not in the future, but recently, they haven't gone far in the postseason. An established point guard is in place with Jason Kidd, and they have a great scoring option in Dirk, but they've been weak at the wing positions.

Caron Butler was supposed to fill that void on the wing last season, but he just seemed uncomfortable in a offense that centers and highlights Dirk.

Haywood performed well against the Lakers in the regular season, but that was only one game. He is a legit seven-footer who can challenge Bynum or Gasol with his above-average post defense and exceptional shot-blocking.

The Mavericks were trying to make a big splash with Eric Dampier's expiring contract, but ended up with a solid center in Tyson Chandler.

If Chandler is healthy, he gives you another exceptional shot-blocker and paint defender. He can even guard more perimeter-oriented big men. At this stage of his career, he isn't going improve his offense significantly in any way but he can give you a defensive presence in the paint.

Dallas didn't get a Chris Paul, but they at least got another seven-footer in Chandler that they can pair-up with Dirk and Brendan to form some resistance against the huge front line of the Lakers.

That is, if they can actually meet the Lakers in the playoffs. 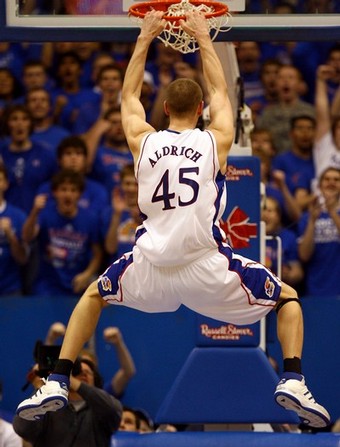 The up-and-coming OKC Thunder have really made a name for themselves when they made the defending champs sweat in last season's postseason.

OKC took the Lakers to six hard-fought games in the first round and established themselves as a future powerhouse led by scoring champion Kevin Durant.

Jeff Green is improving, and with the emergence of Russell Westbrook, KD will have plenty of help in the foreseeable future. They have young defensive stud in Thabo and a nice scorer in James Harden, who will eventually start at the two.

Ibaka was a nice surprise in the playoffs, and hopefully will either start next season or get a spike in his playing time, because this kid can play. He caused a lot of problems for the Lakers with his shot-blocking and post defense. He needs to get stronger and bulk-up a little bit, but if he can progress, it would make OKC a even more scarier team in the future.

They're a very good defensive team under coach Scotty Brooks, and will out-hustle you on most nights.

Some believe the Thunder will make the leap from eighth seed to a top-two or three-seed team in the West, while others view them following the path of the New Orleans Hornets two seasons ago (made the playoffs as an up-and-coming team and then fell apart).

I don't see them falling off like New Orleans did, but I am skeptical to put them as a top-three team in the West. I can see them as a four-, five-, or six-seed in the West, but not one of the top-three seeds.

OKC didn't really go out and get a big-name talent in the draft or free agency, but they did acquire a nice center/power forward in Cole Aldrich from Kansas.

He is a really good defensive center that will make his presence known in the paint. OKC needed another big man that can matchup with the Lakers bigs, but him being a rookie, no one knows how he will turn out.

The Thunder will eventually be up there with the Lakers, but as of right now, they need to gain as much experience as they can in the postseason and allow their young players to continue to improve. 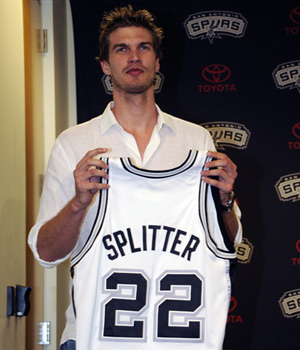 The San Antonio Spurs lucked out when Richard Jefferson decided to opt of the one year remaining on his contract. Then the Spurs did the unthinkable when they decided to sign Jefferson to a long term contract.

I still believe Jefferson can be a 16- to 17-point scorer in the league, but not with the Spurs.

The Spurs play a drive-and-kick type of offense where Jefferson has to knock down that corner three. Jefferson's forte isn't shooting from the outside, and it was proven last season.

Popovich must believe that Jefferson can still fit into the offense, but I just don't see it happening.

The biggest acquisition for the Spurs was Tiago Splitter.

He was drafted several years ago, but never decided to come to the states until this year. Splitter is around 7'0'' and has a great feel for the game. Duncan should be excited about playing alongside Splitter. Splitter has a couple of effective post moves, but most of all, he can run the floor for a big man.

In some of his highlights playing in Europe, Splitter would defend the paint, grab the rebound, and then run the floor for an open court pass that usually concluded with a dunk or easy layup. He should fit in well with Duncan. Also, he will provide the Spurs some help for Duncan when they go against that huge line of the Lakers.

If Splitter can neutralize Bynum in the paint, it will make the Spurs a very dangerous team for the Lakers, but San Antonio still lacks perimeter threats on offense and defense that can slow down Kobe Bryant.

The Defending Eastern Conference Champions believe they are the only true threat to dethroning the Lakers, and they could be right.

There are teams that give the Lakers trouble, but the Celtics are the only successful team to beat them in a playoff series the last three postseasons.

Tony Allen's departure hurt the Celtics because they now have no true defensive stopper on their roster who can slow down a Kobe or a LeBron/Wade combination. The addition of Jermaine O'Neal will provide temporary relief at the center position until Perkins returns from his injury.

The flashy acquisition of Shaq didn't make sense to me.

O'Neal could really help the Celtics with his inside scoring and rebounding, but how many minutes will he receive? Once Perkins returns, he will start, and the other O'Neal will most likely shift to a backup role. Even with Perkins being injured for the first half of the season, Shaq would only receive 20-25 minutes a game.

That would decrease once Perkins returns, and I don't know how Shaq would feel about being a bench cheerleader, especially with his ego still strong despite his declining skills. With 25-30 minutes a game, Shaq could really help the Celtics, especially against the likes of Orlando and LA.

Despite Shaq's decline, he has been effective on both ends against the Lakers.

He seems to cause a lot of trouble for Pau Gasol down low, and at times, L.A. would have to double-team the 38-year-old. Besides the subtraction of Tony Allen, the Celtics had a good offseason, and will definitely be one of the top threats to the Lakers if they can make it out the loaded Eastern Conference. 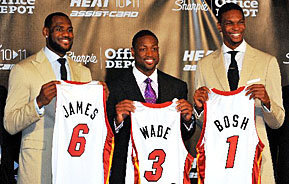 Pat Riley just made the Miami Heat contenders for the next five seasons, but it has made the Heat the most hated team in the league. Every fanbase besides the one in Miami wants to see this team go down.

Some fan bases are said to be cheering for any team to take down the Miami Thrice, even if it is by another hated (but less hated) team like the Los Angeles Lakers.

LeBron must have been tired of going to the playoffs, knowing that an exit is likely the conclusion if he doesn't perform well. That burden must have been too much for LeBron, so he decided to join Wade/Bosh in Miami. They're considered to be the next Big Three, but fans don't believe Riley can add good enough players to surround the Thrice.

Riley has actually done a pretty good job for the money he had left. Acquiring a shooter like Mike Miller was necessary for this team, as both Wade and LeBron are inconsistent jump-shooters but fantastic slashers.

Big Z was an unexpected acquisition, but he should provide some rebounding and size for the Heat. Another shooter in Eddie House was a nice pickup for the bench, but like Boston, Miami doesn't have a defensive stopper on the roster that can slow down Kobe.

Wade can't guard Kobe all night, and also the other way around, but Kobe has backup wing defenders in Barnes or Brown to assist.

Also, another big problem lies in the Heat's inside defense.

The Heat have Joel Anthony, Big Z, and Juan Howard on the roster, but that won't be enough for teams like L.A. and Orlando. Bosh isn't a defensive-minded player, and will get destroyed by elite post players. But having a defensive-minded center could have made it a little easier for CB4.

The Lakers have proven that inside scoring and defense wins you championships, but when I look at this Heat roster, I see a much better Suns team of past.

The Heat have all the hype and media attention, but I just don't see this team winning a championship this season with the roster surrounding the Miami Thrice.

They can't matchup with L.A. on the inside, and if Bynum improves from last season, it could spell more trouble for the Heat if there is a potential finals match.