Well the clock has ticked past the magic witching hour when teams have a last chance to cure what ails 'em via non-waiver trade. The Los Angeles Dodgers were very active at the deadline just as GM Ned Coletti promised. Boy oh boy, is the NL West ever in for it now!

With the team floundering offensively and their playoff chances dwindling with each passing inning, the Dodgers go forth into the marketplace and snag... hold your breath... Ted Lilly, Ryan Theriot, and Octavio Dotel.

Let me run that by you again as I doubt the significance of these acquisitions could be fully appreciated in just one passing. Here we go: Ted Lilly, Ryan Theriot, and Octavio Dotel.

Now that your pulse has slowed down and your giddiness has passed, let's revel in the moment here and bask in the Coletti Glow.

Look, Ted Lilly is a decent back-of-the-rotation arm, and yes, the Dodgers could use one. On the surface a Blake DeWitt for Lilly deal isn't a bad move. It's not a "World Series Here We Come" stroke of genius either. I would have liked this trade a LOT better if it had occured in March. As things are right now, it seems too little, too late.

Ryan Theriot? Uh...OK. I guess. A little more speed at 2B I suppose, but hardly a difference maker. You get the feeling the Cubs wouldn't let Lilly go unless we took Theriot too. I don't blame them. Still, it makes losing DeWitt less of an issue, not that he was much of a factor anyway.

The return of Dotel is a real head-scratcher. I understand the bullpen is shaky. By adding Dotel, the end result is... well, a shaky bullpen.

When you consider that the Dodgers just traded Blake DeWitt, Brett Wallach, Kyle Smit, James McDonald and Andrew Lambo for The Big Three of Lilly, Theriot, and Dotel you have to wonder why the same group couldn't net an Oswalt or Dunn.

The Dodgers took on another $3 million in payroll with these moves so I guess Coletti used all of the $2-3 mil Frank gave him to "play with" and did what he could to address the team's immediate needs. The sad fact is that this really doesn't enhance the Dodgers chances at making a run deep into the playoffs. Heck, you have to wonder if it's even enough to make a run at the Wild Card.

All hope is not lost, however. Coletti still has a pretty big chip to play with in Manny Ramirez. Manny would certainly clear waivers and could possibly bring a bona fide, can't miss prospect or at the very least a decent mid-level player.

I wouldn't mind seeing Manny take his hammy to the AL Central for a kid like Dayan Viciedo. I mean, why not? Do we really believe Manny is going to come back and tear it up like he did in '08? Or even pick up where he left off?

I'm sure Boras is telling Manny to take it easy and to protect his legs in hopes of pulling in a couple of million to DH someplace next year. I'd rather get something for Manny while we can than bet on him regaining his form and taking us to the promised land this year.

The bottom line is, with or without Manny the core group of Ethier, Kemp, Loney, and Martin need to start producing. Now. Billingsley, Kershaw, Kuroda and Padilla need to stay solid and Lilly needs to fit into the rotation without skipping a beat. Time is running out and we can't wait for Manny to be Manny.

Of course, we have Theriot. Watch out National League.

Alex Wood Back in Blue, with Inside Track to Spot in Dodgers’ Rotation 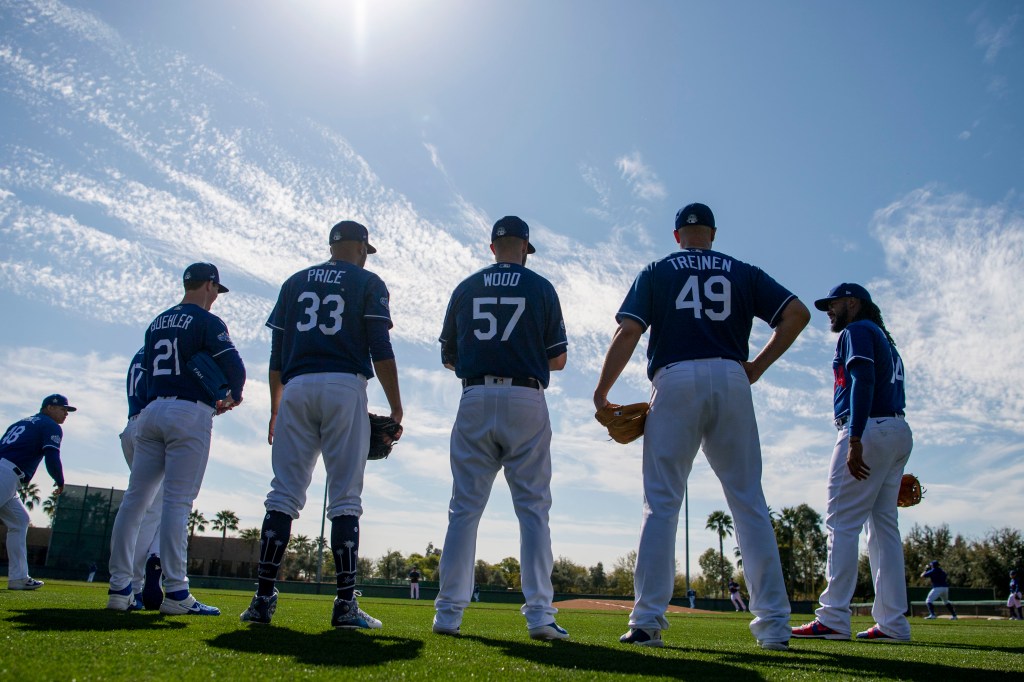 Alex Wood Back in Blue, with Inside Track to Spot in Dodgers’ Rotation