We’re witnessing the prelude of the remodeling stages transpiring in South Beach, at the shores of the tropical scenery near the airy ocean with sunny skies beaming as brighter days are arriving in the near future.

During the biggest free-agent class in NBA history, the focus is on fans nervously begging for LeBron James, the global superstar and mystic free-agent, to either return to Cleveland or migrate to Madison Square Garden and renovate his dignified legacy on Broadway.

With any luck, of course, he could end up joining forces with Dwyane Wade and Chris Bosh to erect NBA’s superteam, a wild and powerful trio, automatically turning the Miami Heat into lethal contenders. It seems unrealistic whenever a franchise woos a superstar as vigorous as James and tries assembling the icon with two other well-known superstars, given all the ego and financial problems.

Portrayed as a global icon and a remedy in a relentless league that has reproduced much chatter and notability ever since the arrival of top players advertising imposing marvel, James must not squander a wise choice by signing an enormous and ridiculous deal with a misshapen organization.

It has been an ultimate sports tale, and as you carefully speculate and try to determine LeBron’s next location and estate, it’s quite baffling. As it stands, he owns the most leverage in the free-agency frenzy, and has been very mum without revealing plans for his future since his appearance on Larry King Live.

But in all likelihood, he will decide to remain in Cleveland, a town James was born and raised in and began his impressive career. Ardent fans overcrowded the sidewalks and placed black placards that read “HOME” on the concrete, even a crazed fan was pulled over for roaring his engine Saturday.

They were serenading “LBJ! LBJ! LBJ!” as he walked in for his meeting with the Cavaliers dressed casually and wearing his backpack, like he’s the No. 1 high school prospect in the country being recruited. If he goes back to Cleveland, it’s likely because of new coach Byron Scott, who was recently hired to address the coaching vacancy.

Because of his impressive resume, Scott’s presence could keep James in Cleveland, despite all the helpless calamity and bad luck. But although Scott has won three championships and carried the New Jersey Nets to two NBA Finals appearances, a coaching fix won’t guarantee that he’ll re-sign, nor will the loyalty of his beloved fans in his native town.

If James is smart, he’ll accept an offer sheet and shortly after join the Heat, who instantly will reform into top contenders in a drastic turnaround, having the likes of Wade, Bosh and James, three superstars inclined to win a championship. As for the biggest prize on the market, James is expected to announce his next location no later than Thursday night, when he will stare at the entire world from a television camera during a one-hour special on ESPN and notify the masses where he’ll play next season.

It’s understandable that the initiative blueprint is putting together a super sized core, attempting to initiate an unparalleled dynasty, and aiming to rise at a high level by winning titles. If James is planning to leave his hometown, none of it would sound jarring in the modern times when it’s very seldom that a player spends his entire career with one franchise.

With vital star power and the Heat insisting they are looking to build a trio, James’ decision becomes less complicated and mitigates contemplation with all the attention surrounding him. Assuming that he’s not allowing his full-blown ego to brainwash his career in pro sports, he should be willing to co-exist and unselfishly improve the performance level of his teammates, and be a suitable megastar to renovate a franchise around.

It’s better if he tries winning in South Beach, assuring he values multiple titles, but also sacrificing and more concern with becoming a global icon. By now, he has weighed all his options and maybe Hall of Famer Pat Riley, who is a mastermind in rebuilding a depleted franchise and uplifting greatness, has wooed him to join the most invincible tandem and muster the trifecta.

Once upon a time, Riley was too tempting and tried to create a dynamic force, but if James suddenly announces that he’s signing with the Heat, he’ll make Riley look smarter, wiser and even a finesse persuader. This would combine three talented superstars, all riding one mission and having one objective: an NBA championship.

While there has been doubt about whether Wade-James could excel as teammates, the Heat aren’t scared to give it a chance, understanding the possibility of becoming effective and championship-caliber. Down the road, the Heat must prioritize with their underachievers, just as Wade and Bosh must compromise their egos and work as an unselfish core to form a powerful nucleus in South Beach and darken the aspirations of their opponents.

If he takes a paycheck to team up with Wade and Bosh in Miami, then James has a greater chance of grabbing his first championship, knowing he needs a pair of stars after things crumbled agonizingly in Cleveland. There hasn’t been much assurance since the Heat acquired center Shaquille O’Neal last season, or invested their No. 2 overall pick on forward Michael Beasley, two key players who have been factors for their inconsistency and poor performances.

By grabbing Bosh, it immediately rectifies the Heat’s flaws. He is, arguably, one of the most dynamic interior and post-players, a forward taking advantage of his height, and has matured as a pesky nuisance in the middle. Is it almost a Superteam? Indeed.

He makes a good tandem alongside Wade, who will now benefit with Bosh in the lineup because he draws more defenders, which opens the floor and unclogs the driving lines. This is a way to meet priorities for meeting Wade’s demands, but there’s still unfinished business without LeBron in South Beach. 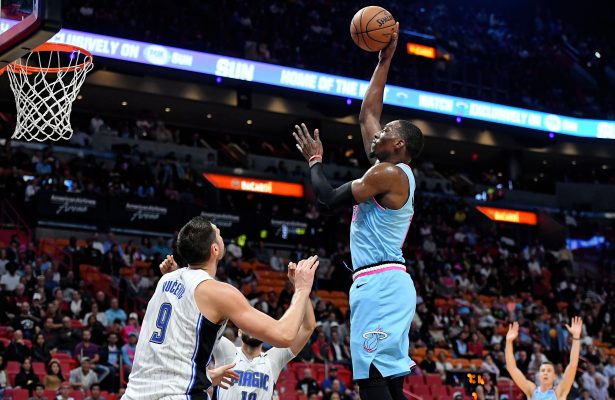