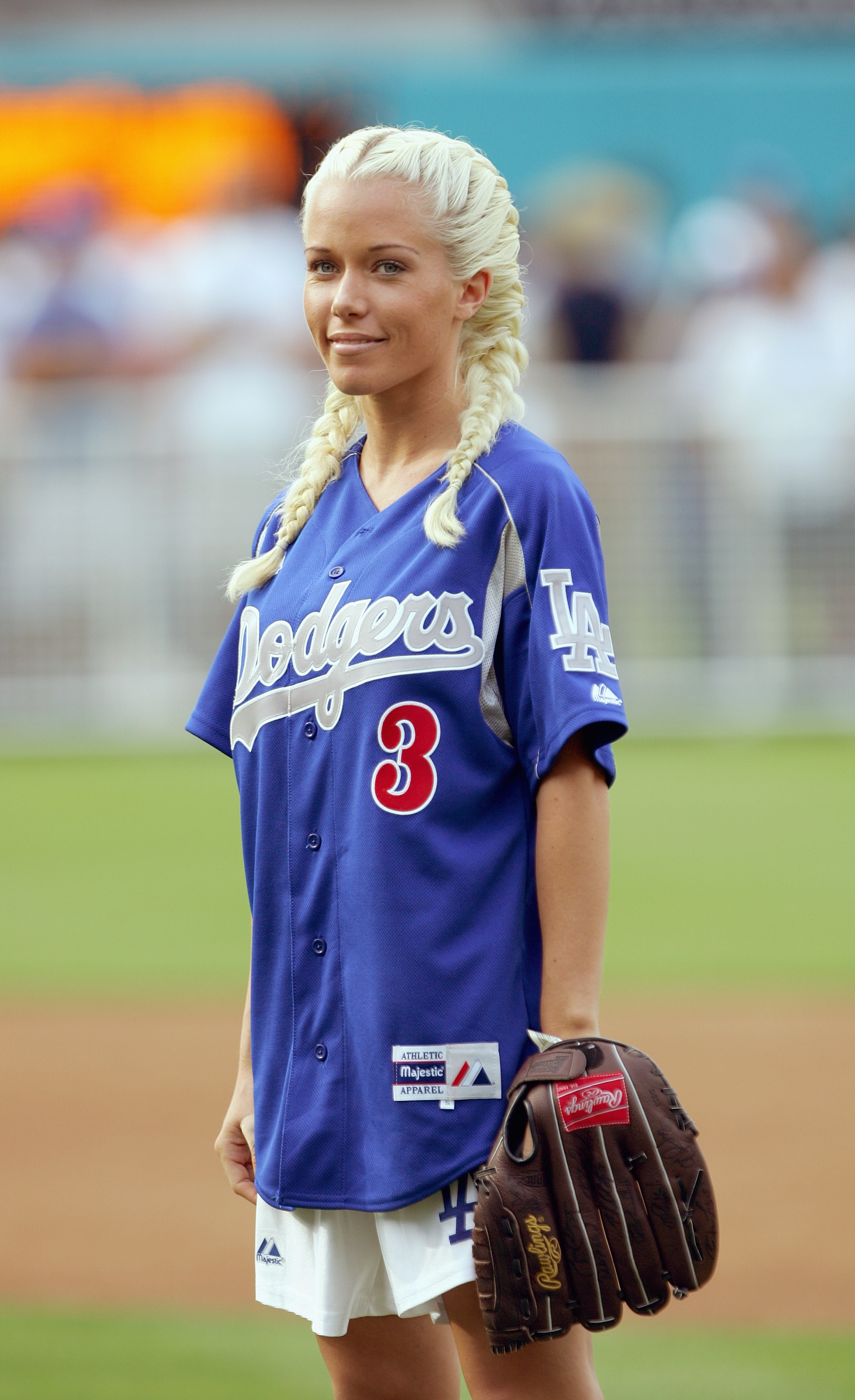 Dodger Stadium has always been the perfect venue for celebrities to make public appearances while cheering on the Boys in Blue from Tinsel Town.

This is a compilation of the hottest bodies to wear the hottest uniform in Major League Baseball, men and women.

There is no shortage of famous people to add to the list of appearances at Chavez Ravine, so this list is debatable and suggestions are welcome! 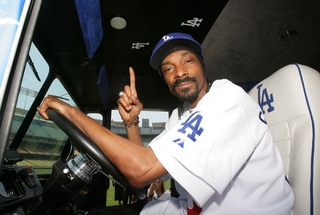 Snoop Dogg is a Long Beach, CA native and lifetime Dodgers and LAKERS
fan. Snoop makes the hot list for his ability to be almost 40 years old and still prominent on the hip-hop scene.

He hits the list at No. 10 because no one has been hotter in hip-hop over the last 20 years, and he can rock the Dodger Uni without anyone asking questions. 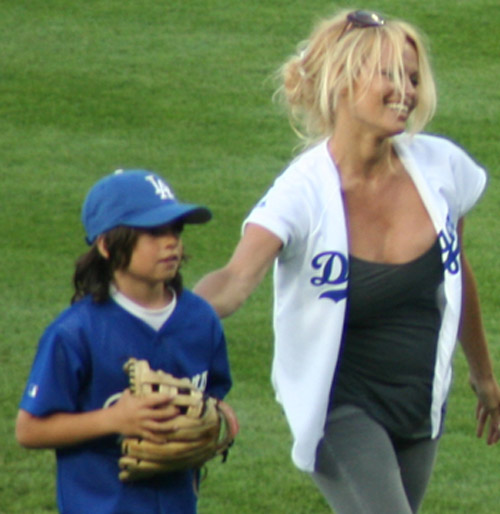 You just can't go wrong with former Playboy Playmates throwing out the first pitch. Anderson, seen here with her son, has stepped out of the spotlight somewhat but still wears the Dodgers jersey with sexy style.

Pam has attended several Dodgers games, including a few with Kid Rock. The rapper turned singer is a native of Detroit and always wears his Tigers hat while Pamela wears Dodger Blue. 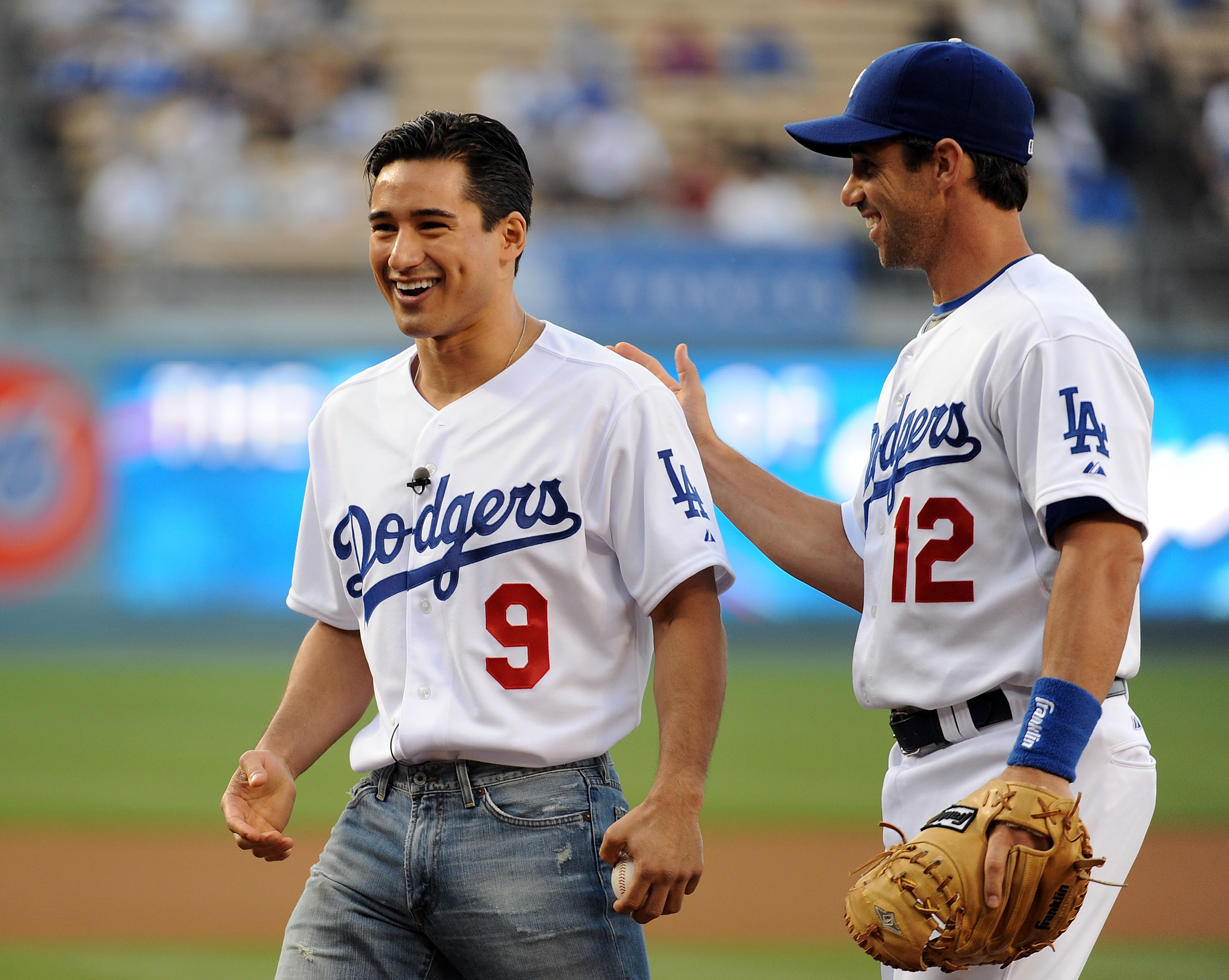 Gotta love the jersey tucked in to the acid-washed jeans. Nothing says style and flair like A.C. Slater throwing like a girl to Brad Ausmus.

Mario López still hosts several successful shows and while being the subject of continued jokes, is actually very fit and considered a major star. 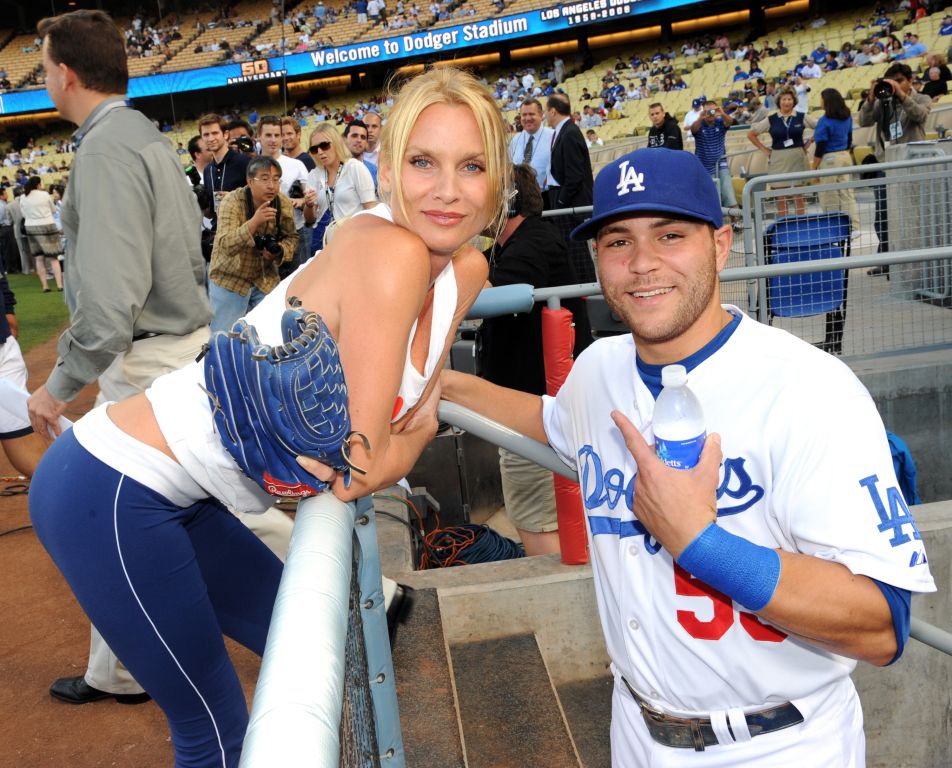 The Desperate Housewives star has been all over the jumbotron at Chavez Ravine over the last few seasons, and makes her Dodgers allegiance no secret.

Sheridan could wear anything blue and look sexy, but the fact that it normally has "Dodgers" written on it in white makes it that much hotter. 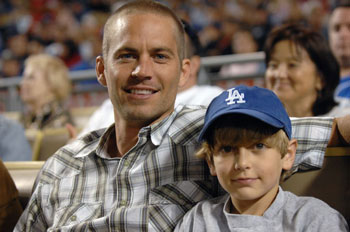 Walker attended this Dodger game on July 1st last year. The Hollywood hunk has been a prominent star in major feature films for the last decade.

While most stars try to mask their appearance to stay out of the public eye, Walker tossed the hat and sunglasses aside and readily smiled for the photo-op. 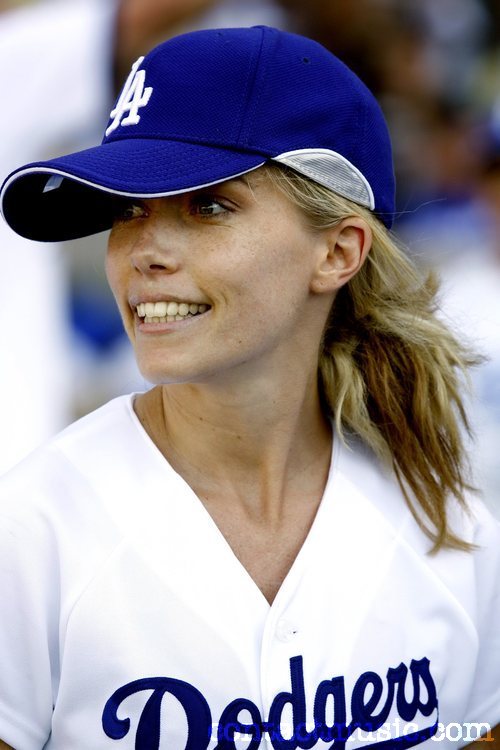 The Girl Next Door is a native of San Diego, CA. She is an avid Padres/Chargers fan but is not shy about wearing Dodger Blue. 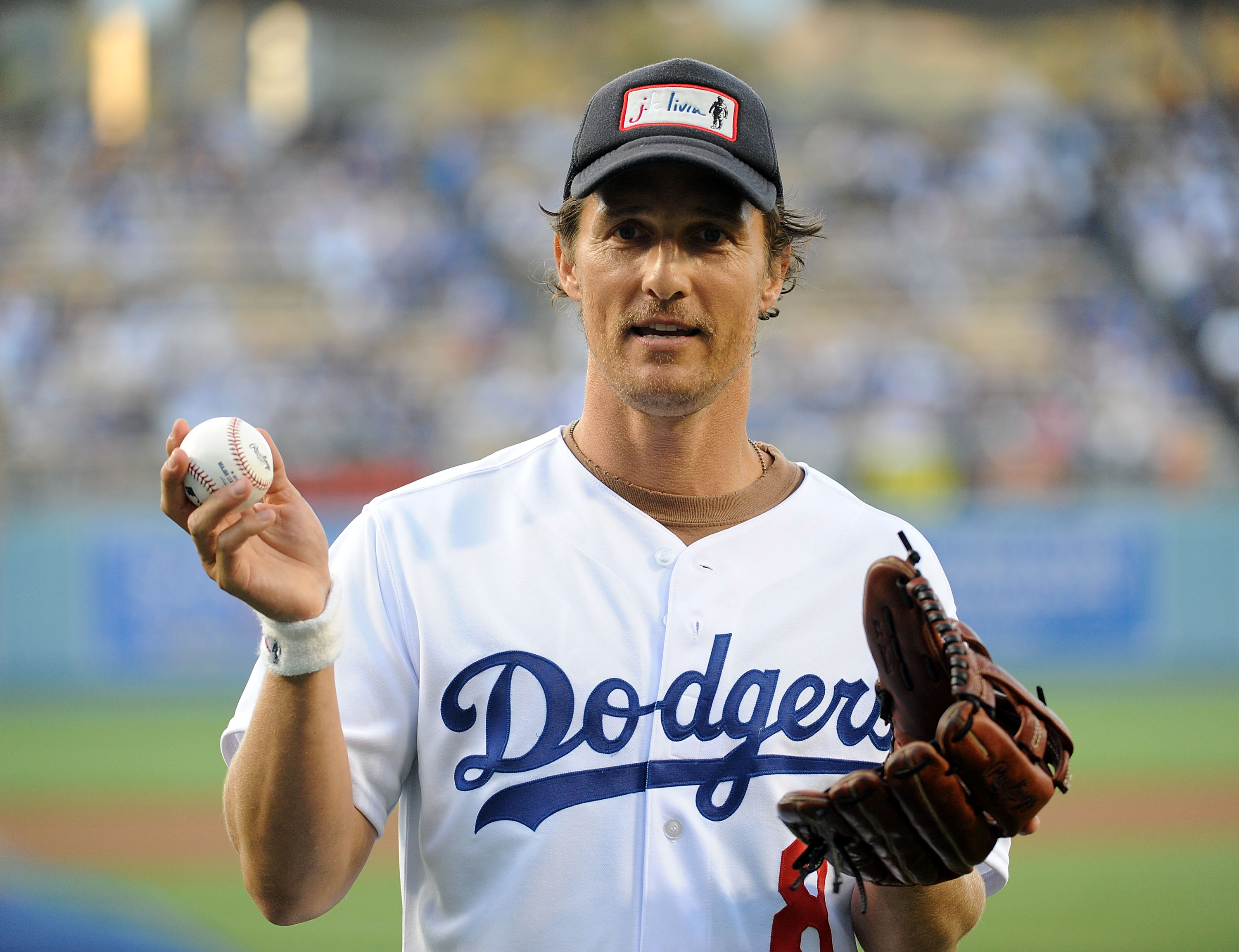 McConaughey also threw out a first pitch for the Dodgers in May 2009.

The eccentric heart-throb is very active in sports and physical recreation. The Texan is no stranger to sporting events and has been spotted at Lakers games, Dodgers games, and several other major sporting events. 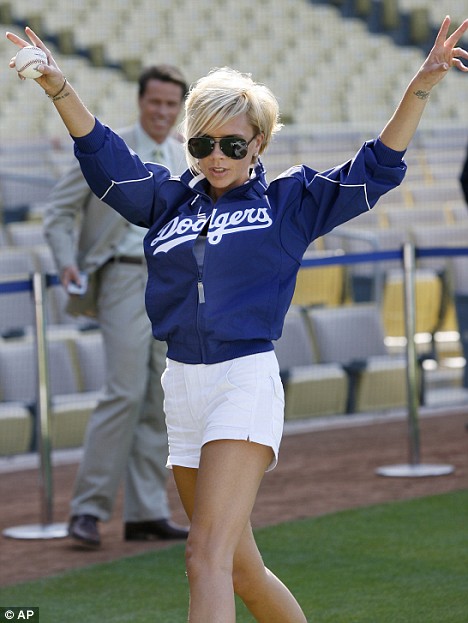 "Posh Spice" beats out fellow Spice Girls, Geri Halliwell in this competition. Victoria Beckham was at Dodger Stadium to throw out the first pitch while promoting her husband, David Beckham's move to the United States.

The LA Galaxy, MLS, and the Dodgers were proud to have the Beckhams in Los Angeles, but David Beckham has since left the team to play for AC Milan, and I'm sure Dodger fans are disappointed they won't get to see his wife as often. 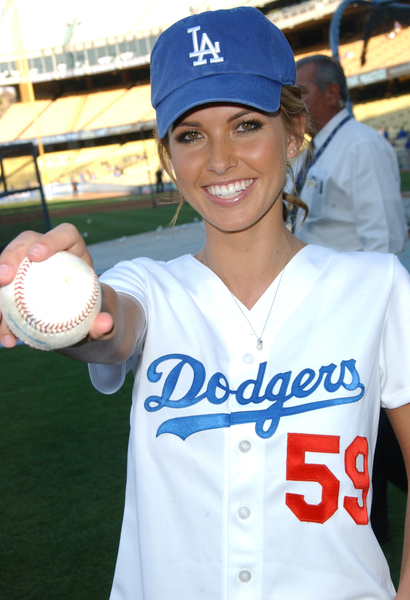 Patridge, specializing in the melodrama, visited Dodger Stadium to throw out a first pitch, most likely secretly scripted.

"The Hills" has seen its fair share of reality TV stars become actresses, I wonder why they're are so successful in Hollywood.... 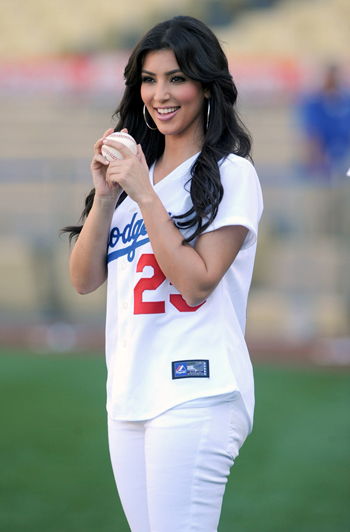 The matriarch for "Being famous for nothing" looks super hot in a Dodgers jersey, and the white pants to match certainly don't hurt the cause.

Kim threw out the first pitch at Dodger Stadium with her family on May 6, 2009.

I would like to add that the pitch was surprisingly close, and Kim practiced for several minutes with the team beforehand. 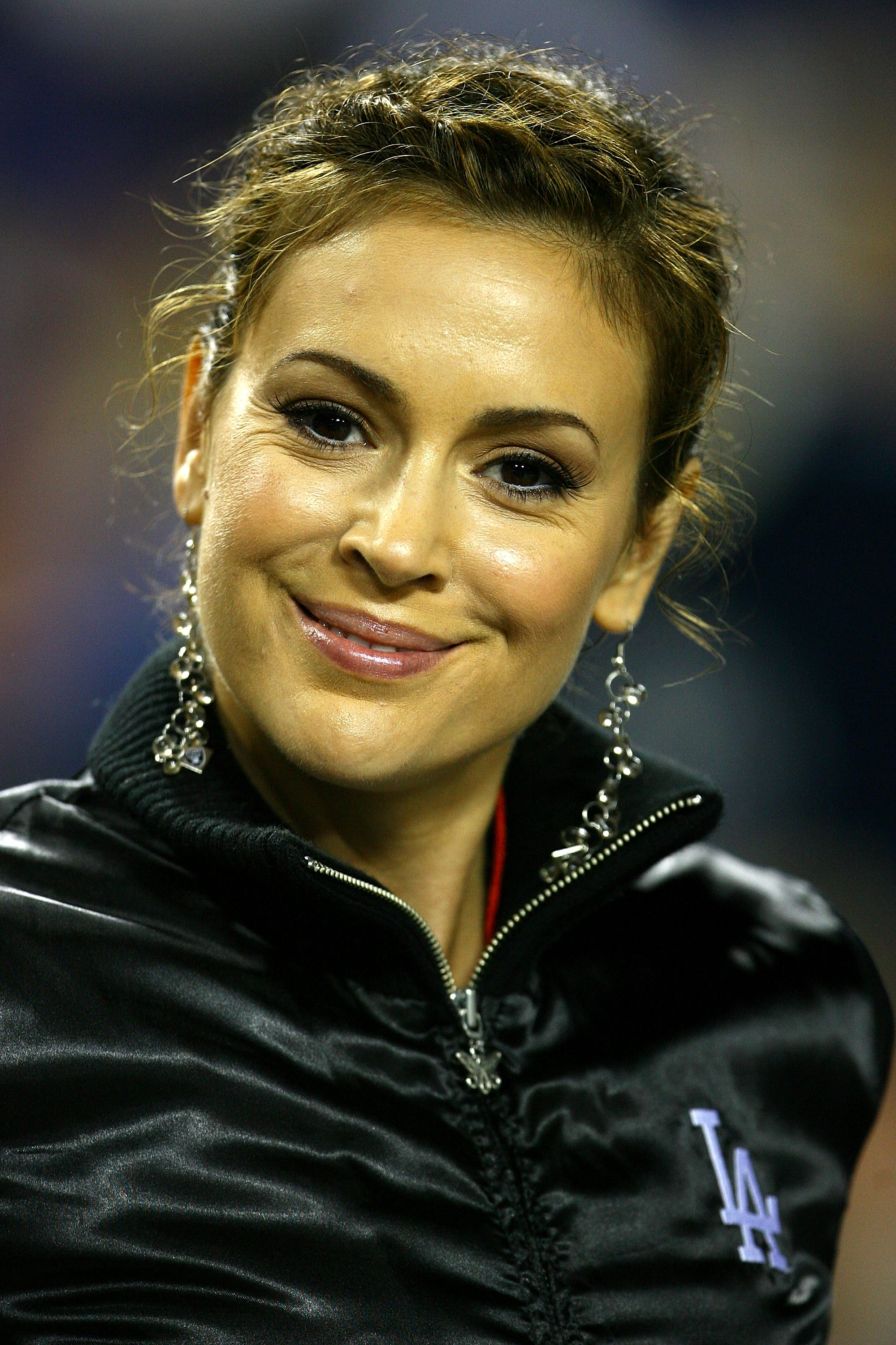 Alyssa has even had a column,*touch* 'em all, on the Dodger's site, and is an avid fan. This author may have had a slight lapse in judgement by not adding her to the list, but still maintains his own personal stance.

However, by popular demand, I will admit Alyssa deserves her props and therefore has been added to the countdown as an unranked addition on her own slide.

And just so there's no hard feelings for Dodgers fans who posted their disagreement, here is a link to a hot shot of her in an all-white swimsuit outfit: