The Minnesota Twins are tired of running headlong into the buzzsaw that is the New York Yankees. This is the team that has beaten the Twins in the playoffs three separate times during the managerial reign of Ron Gardenhire.

In their new 2010 Target Field, the Twins want to win the whole thing this season. They have a potent offense, led by three-time batting champion and 2009 MVP Joe Mauer and former MVP Justin Morneau.

They have the financial wherewithal with the new stadium and have upped their payroll already to $98 million, more than the Los Angeles Dodgers'. In addition, the Pohlad family, owners of the Twins franchise, are one of the wealthiest families in all of sports.

Speaking with someone familiar with the situation (and verifying the initial conversation), the Twins traded for Cliff Lee last week, but the deal fell through. The primary player going to the Seattle Mariners, catcher Wilson Ramos , suffered a strained oblique during Saturday's game. Ramos is expected to miss seven to ten days .

The deal included Ramos, a Twins Major League-ready pitcher (believed to be left-handed reliever Brian Duensing ), and a low level minor league outfielder. The Mariners might be including a low level player, too.

Once Ramos gets clearance to play baseball again, this trade will again be made.

It appears that this deal heavily favors the Twins, as they would get one of the premier pitchers in baseball essentially for a young catcher their system sorely needs, a possible starting pitcher, and a filler.

If I were the Mariners, I would hold out (briefly, like a day) for 3B Danny Valencia , instead of the low level player, in addition to Ramos and Duensing.

In addition, Blackburn, who is signed through 2013 and is usually the team's most reliable starting pitcher, has had a very off year so far. His record is a respectable 6-4, but with a 5.80 ERA. We all know, however, that the pitchers' wins are more important.

The Twins staff already has five good starters, but Lee would fit in nicely in any team's rotation. As I write this, Lee just finished up another complete game , beating the Chicago Cubs 8-1 with nine strikeouts and ZERO walks.

It is Lee's fourth complete game this season.

Ramos is a good, young catcher but is blocked by Joe Mauer, making him expendable. Ramos came up to the majors earlier this season when Mauer was hurt and hit .296/.321 OBP/.407 SLG/.729 OPS with three doubles and an RBI in limited time.

However, he is struggling with the bat in Triple-A Rochester, hitting only .218 with four homers and 18 RBI.

That positive Major League time gave the Mariners an idea that he can be a good starting catcher. In fact, Ramos could step into a starting role right away.

Duensing is a 27-year-old left-handed pitcher who was squeezed out of the Twins rotation in 2010. He started nine games last season, including this gem over the rival Detroit Tigers, which helped lead the Twins into the playoffs.

Duensing was 5-1 as a starter down the stretch last year for the Twins.

Even though he has been great as a reliever this season (2-1, 1.88 ERA, 0.812 WHIP), and really tough against lefty hitters (.122 BA), I do expect the Mariners to convert Duensing back to a starting pitcher.

It is not enough of a haul for the Mariners, especially well before the trading deadline and with Lee pitching so well right now.

The Mariners are basically giving the American League Central division title to the Twins.

And that is bad new for the New York Yankees, Boston Red Sox, Los Angeles Angels, Texas Rangers, and any other possible American League playoff team which could face Lee in the 2010 playoffs. 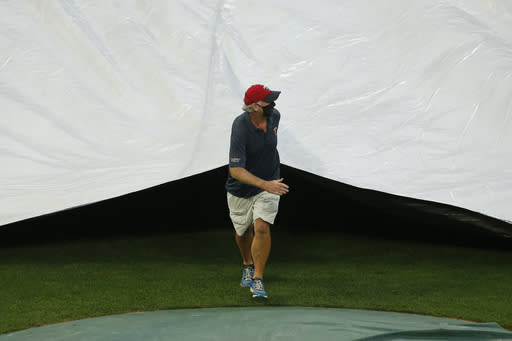