Sam “Bam” Cunningham arrived on the USC campus from Santa Barbara, the town some one hundred miles north of Los Angeles from which Marv Goux, a great center and linebacker and later defensive coordinator at Troy, also came.

It has just been announced that Cunningham is one of a current group of invokees into the College Football Hall of Fame.  He was part of a legacy involving what many grid experts called the greatest college football team in history, the 1972 Trojans.

Cunningham had one of those natural physiques that come along rarely—broad-shouldered and chested, while tapering naturally at the waist—a perfect decathlete’s frame.

After Cunningham finished his varsity stint with the Cardinal and Gold, his witty coach, the white-haired fox John McKay, stated that his handling of the All-American fullback was “The worst waste of talent of my career.”

By the time Cunningham arrived at USC, McKay already had sportswriters referring to Troy as “Tailback U.”  When Cunningham arrived as a freshman in the fall of 1969, the McKay system had already produced Heisman Trophy winning tailbacks in Mike Garrett in 1965 and O.J. Simpson in 1968.

Cunningham’s leading game statistically as a regular ball carrier came during his first game as a sophomore. The Trojans were invading Birmingham to face an Alabama Crimson Tide team coached by one of McKay’s closest friends, Paul “Bear” Bryant.

The talented sophomore ran wild in leading the Trojans to a 42-21 victory.  What happened after the game remains conjecture.  According to some accounts Bryant walked into the USC dressing room, asked his friend McKay if he could “borrow” his star back, then took him into the Tide dressing room.

It made for great storytelling and is a matter of dispute, but Bryant was said to have marched up to the front of the dressing room with Cunningham.  He then allegedly pointed to Cunningham and said, “Gentlemen, this is a football player.”

While some sources claim that this incident never happened, one account is beyond dispute.  Bryant used the devastating Cunningham performance to lobby for recruiting African-American talent to Alabama.

After the promising beginning, Trojan football fortunes took a turn for the mediocre by the school’s lofty standards.  During Cunningham’s sophomore and junior seasons of 1970 and 1971, USC finished with identical 6-4-1 records while Stanford won conference titles each season and appeared in the Rose Bowl—where Troy had appeared in four successive games before the two year drought.

The 1971 season had been injury plagued.  It was thought that if USC could develop its talented roster without being victimized by bad luck, the 1972 team could be one of the best in the school’s history.  The devastating result more than confirmed that forecast.

The 1972 Trojans were one of only two teams to hold the number one position from the first game of the season to the end.  The campaign began with a dominating 31-10 win on the road over a highly regarded Arkansas team.  The regular season culminated with a 45-23 win at home against longtime intersectional rival Notre Dame in which Anthony Davis tallied six touchdowns, two of which came on dazzling kickoff returns.

Cunningham performed yeoman duty at fullback, a position where his strong blocking prowess was featured. His was the responsibility of lining up in McKay’s patented I-formation behind quarterback Mike Rae and in front of sophomore tailback phenom Anthony Davis, a San Fernando product known for his breakaway talent, as evidenced against Notre Dame.

Cunningham would lead the way with Davis following behind.  A Cunningham block would spring Davis at the point of attack.

While Davis received a lot of publicity for his electrifying runs, McKay would emphasize Cunningham’s value.  Writers and commentators would marvel over how many times Davis would carry the ball.

McKay made this telling point.  “Yes, Davis carries the ball more than thirty times,” the coach acknowledged, “but on every one of those runs Cunningham is in front of him blocking over thirty plays a game.”

There was also one area where Cunningham excelled beyond his valuable blocking and this is where the nickname “Bam” came into play.  His unique role in crucial third down and short yardage situations was summarized in a column by the sports writing profession’s greatest humorist of the day, Jim Murray of the Los Angeles Times.

Murray described the situations Cunningham faced.  He noted that the sturdy fullback would perform his blocking chores until being called on at a point where everybody on the opposing side expected a run and eleven players would be lined up at or near the line of scrimmage.

“Then they give the ball to him!” Murray concluded.

It was Cunningham who patented the USC dive play that was used with successful results later in the seventies by Heisman Trophy winning tailback Charlie White.  The line provided the right push at the point of attack to enable Cunningham to leap airborne and fly over the pile for a touchdown.

The Rose Bowl game against Woody Hayes’ defensive minded Ohio State Buckeyes gave Cunningham a chance to shine in his final appearance in a Trojan uniform.  The Buckeyes had won the Big Ten title and the trip to Pasadena by denying Bo Schembechler’s Michigan Wolverines touchdowns with exciting goal line stands.

When the defense tightened in goal line situations in the Rose Bowl, a different result occurred.  Sam “Bam” Cunningham went airborne four times into the end zone as USC culminated its perfect season with a rousing 42-17 win.

Despite the fact that quarterback Mike Rae set a Rose Bowl record for completion percentage, with All-American superstar receiver Lynn Swann on the end of many of his accurate aerials, this was Sam Cunningham’s big day as he secured “Player of the Game” honors.

From there it was on to a successful career in the pros as Cunningham performed for nine seasons with the New England Patriots. 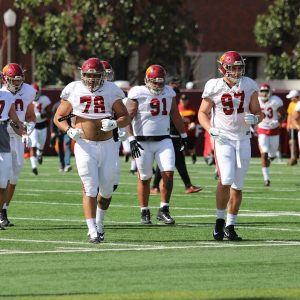