Unlike certain Chicago White Sox reporters who detest the Toronto Blue Jays and their fans for living in a hockey-hungry nation, the Tampa Bay Rays have embraced it as they travel to Toronto for a series with the Jays.

Manager Joe Maddon decided upon a team-building exercise that saw the Rays players wear hockey jerseys as they left Tropicana Field, and made their way off the plane in Toronto.

The dress code was for the players to wear a hockey jersey for the flight, in honor of the Stanley Cup Finals, and the celebration of hockey in Major League Baseball's only Canadian city.

Upon hearing of the plan, the Chicago Blackhawks (who find themselves up 1-0 in the finals series) offered each player a free replica of their home red jerseys, of which many players accepted. Maddon himself received a special replica jersey of the one worn by Hawks forward John Madden. 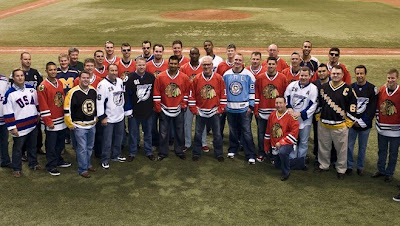 And once the Tampa Bay Lightning heard of the Blackhawks' plan, they sent a few of their own to any players still in need of one.

"We're going to Canada," Maddon told reporters. "And it's the national pastime of the great country of Canada."

Themed dress-ups on road trips are not anything new to the Rays, who last year dressed up as cowboys for a road trip to Denver to play the Rockies. Maddon also noted that he hopes the team will wear all white for their interleague contest cross-state against the Marlins later this season.

Among the many Blackhawks jerseys were those sporting names of Jacques Plante, Patrick Roy, Tony and Phil Esposito, and Grant Balfour's throwback Blackhawks' Eddie Belfour jersey.

Maddon, who grew up in Pennsylvania, stated that he was not cheering for his home-state Flyers, joking that it may have had something to do with a certain World Series championship the Phillies won in 2008 over the Rays.

Pitching coach Jim Hickey said much of the same. "Nothing like a little pro-Chicago, anti-Philadelphia sentiment," he told reporters. "I thought we could share our mutual dislike for Philadelphia sports teams."

The question now is what will the Rays wear on other road trips to Arlington; for instance for their series against the Rangers. Or will Toronto return the favor and dress Floridian for their next trip to Tropicana Field?