Game two of the Chicago Blackhawks versus Vancouver Canucks series starts tonight, and after a spanking in the first game, the Hawks must push back and win this game two at home.

A loss tonight would certainly be the Hawks' undoing as I don't see them going into Vancouver and winning both games. Even if they win one in Vancouver they'll still be down 3-1, and Vancouver is too good of a team to let the Hawks come back from 3-1. 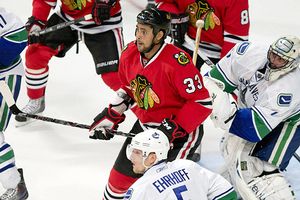 This makes this game even more important. Hawks coach Joel Quenneville has been mum about changes, but we do know of one: Adam Burish will be in the lineup after missing the first game in the series.

Burish in the lineup will boost the team. The Hawks are 3-0 this postseason with him and 1-3 without him.

Defense was defiantly the problem for the Hawks last Saturday. All goals were "self-inflicted wounds." Better defensive play will result in better offensive play.

Getting in front of goaltender Roberto Luongo will only help. Limiting his visibility was how the Hawks dominated him last postseason. The man doing the dirty work?

None other than the Dustin "Big Buff" Byfuglien. Big Buff was a major factor in goals last year. Not because he scored, though he scored more than a few last postseason, but the fact he can create goals by screening Luongo. A very key skill that helps any team.

Blackhawks deficient in all areas, but goaltending the biggest reason for 0-3 start

Blackhawks deficient in all areas, but goaltending the biggest reason for 0-3 start

apedue
via On Tap Sports Net