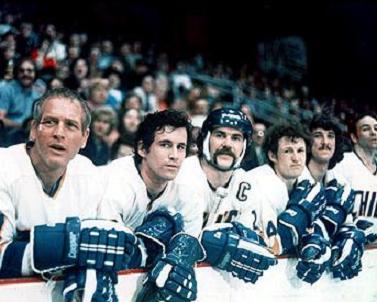 When it comes to sports films, I have my favorites — Field of Dreams, Major League, and Caddyshack are all at the top of my list.

Rocky, Raging Bull, Hoosiers, and Bull Durham are also all considered heavy favorites by the overwhelming masses; it’s tough to argue with a list like that.

But my all-time favorite sports film is without a doubt, the hilarious 1970's hockey comedy, "Slap Shot."

Any hockey fan will understand the film’s subtleties, its characters, and the tenacity that encompassed the film’s heroes: The Charlestown Chiefs.

It was iconic for its use of vulgar language, which, at the time, had not been completely accepted by audiences.

It was old-time hockey at its best, or worst, depending on how you look at it.

It was about “putting on the foil.”

Here are the five reasons why the minor-league hockey film has a special place in every hockey fan’s heart atop the greatest sports films ever made. 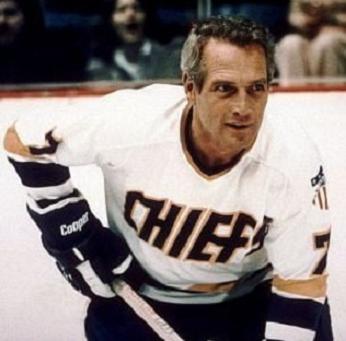 Nobody quite said it like Charlestown Chiefs’ player/coach Reggie Dunlop, played by the late, great Paul Newman.

Few coaches in hockey’s glorious history knew how to motivate ‘em like Reg. The best part about Dunlop was that he was an innovator.

“I am personally placing a hundred-dollar bounty on the head of Tim McCracken. He’s the head coach and chief punk on that Syracuse team.”

Although, now that I think about it, I’m sure that former NHLer Chris Simon was just a few games away from taking another players head off given his extensive, and somewhat impressive, disciplinary history.

But Dunlop knew how to get his team a big win when they were down late in a game. Most coaches would think about pulling their goalie, but not Reg.

Coach Dunlop would instead insult the opposing team’s goalie, like he did to Tommy Hanrahan.

I can’t get too graphic due to Bleacher Report standards, but Dunlop accused Hanrahan’s wife of cheating on him with other men ... and women. I’d like to see Detroit Red Wings head coach Mike Babcock top that — you never know.

Coach Dunlop is easily one of the greatest film characters of all time, and a big reason why Slap Shot was such a success. 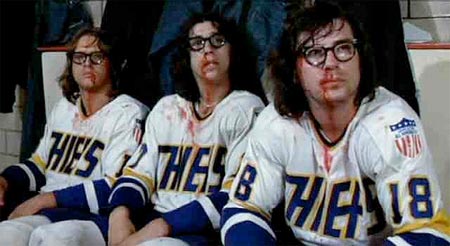 The film’s teams play in the fictional “Federal League.” And the chief enforcers in the Federal League were the Hanson Brothers — all fresh out of the Iron League.

Were they goons? Perhaps.

Were they fighters? Yes.

Were they fun to watch? Absolutely.

From their first shift out on the ice, Jack, Steve, and Jeff Hanson, skated themselves right into hockey history. Their hits were cheap and vicious — not to mention they would have been suspended for the rest of their careers if the new NHL hitting rules had been in place — but they were hockey players to the fullest extent.

They put tinfoil on their knuckles before games, they fought the fans in Hyannisport and they were arrested after a game.

And through all of their fights, nothing compares to when the Hanson Brothers raced toy cars in their hotel room during a road trip.

If you’re unfamiliar with the Hanson Brothers’ tactics, then watch this little gem. Parental discretion is advised.

The Plethora of Goons on the Syracuse Team and Their Nicknames 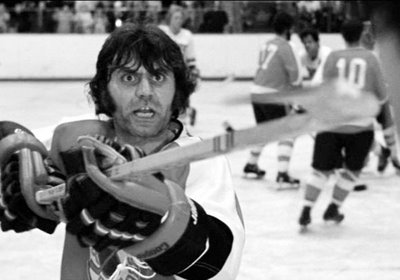 Only in an All-Star game do players get the grand entrance of having their names called one-by-one as they step onto the ice.

After an embarrassing loss to the Chiefs earlier in the season, Syracuse Bulldogs’ captain Tim “Dr. Hook” McCracken went out and found every goon and tough guy that ever played in the Federal League and put them on the Bulldogs’ roster for the championship game against the Chiefs.

There was Gilmore Tuttle, no nickname, but his intimidating, George Parros-like mustache was enough to strike fear into the heart of any opponent.

Then there were Andre “Poodle” Lussier, Ross “Mad Dog” Madison, and one of my personal favorites, Clarence “Screaming Buffalo” Swamptown.

Chiefs’ broadcaster Jim Carr, played by Andrew Duncan, provided a great introduction for Swamptown: “Here’s a name for you nostalgia fans: Clarence 'Screaming Buffalo' Swamptown. I’ll never forget an exclusive interview in which Swamptown revealed that he calls his hockey stick the 'Big Tomahawk,' and he usually refers to the opposing players as 'the little scalps.'"

Carr had several amazing calls in the film, but perhaps none better than this: “Oh, this young man has had a very trying rookie season, with the litigation, the notoriety, his subsequent deportation to Canada and that country’s refusal to accept him, well, I guess that’s more than most 21-year-olds can handle ... Ogie Ogilthorpe!”

The Birth of the Modern GM

Making 15-hour bus rides to give a one sentence speech, selling skate-sharpeners and other equipment midseason, setting up team fashion shows; there wasn’t much that Chiefs’ GM Joe McGrath didn’t do for his team.

How many current GMs would go down to their team’s locker room during the middle of a playoff game and give them a rousing speech like McGrath did — although Toronto Maple Leafs GM Brian Burke may very well be on his way to such a rant.

“Every scout in the NHL is out there tonight, with contracts in their pockets, and they’re looking for talent, for winners. Oh, in all my years of publicity. All the fashion shows and radiothons for nothing. They come here tonight, to scout the Chiefs — the toughest team in the Federal League! Not this! Bunch of, [expletive deleted].”

Use your imagination on that last word.

And don’t forget, McGrath “got a good deal” on the Hansons, too. 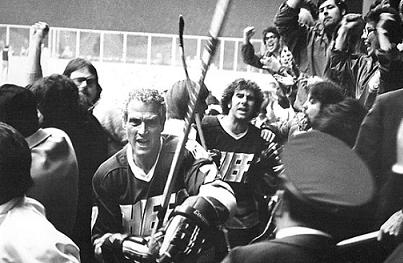 “Old-time hockey” refers to the good old days, when hockey was played straight-up, with no dirty play.

But the film had such an effect on the sport and hockey’s terminology, that “old-time hockey” has come to refer to the brawling, violent brand of hockey played by the Federal League champion Charlestown Chiefs.

“No more ‘Nail 'em.’ No more ‘[expletive deleted]’ with ‘em.’ That’s finished. I want to win that championship tonight, but I want to win it clean. Old-time hockey, like when I got started, you know? Jeez. Toe Blake, Dit Clapper, Eddie Shore, those guys were the greats. I don't know what to say. Christ, it’s up to you.”

After being physically destroyed in the first period, plus GM McGrath’s reminder about the scouts watching, the Chiefs went back to their brand of old-time hockey — and there simply is nothing better to watch.