During their two stops in Florida, the Canadiens were treated to a home game-like environment as snowbirds filled the Bank Atlantic Center and the St. Pete Times Forum.

On Monday night, Canadiens' fans were out in force in Ottawa. Strains of "O-le, O-le" could be heard throughout Scotiabank Place. The chant of "Go Habs Go" filled the Air Canada Center last Saturday when the Canadiens visited Toronto. Quite simply, Habs fans are everywhere.

Recently, on these pages and others, there has been much discussion about supporters of the Montreal Canadiens.

When baseball fan John, from pickmyNHLteam decided that he wanted to follow the NHL, we gave him an idea of what it means to be a Habs' fan with the article "Nous Sommes Canadiens/We Are Canadiens."

Wearing bleu, blanc et rouge, Canadiens' fans support their team when they arrive for games in every arena in the NHL.

Sometimes, when more Habs' supporters turn up for a road game than fans cheering the home team, it can bring out a jealous side like one Islanders blogger. While they may complain and criticize, one wonders if it's simply out of envy.

In my opinion, Canadiens' fans are some of the most dedicated in the league. I've had the pleasure of communicating with them from all over the world.

Not long ago, we were treated to a unique South American perspective when Ana, a Brazilian, wrote about her path to finding the Habs through the music of Simple Plan.

But you don't have to travel halfway around the globe to find locales which are unexpectedly home to Habs' fans. They can be found just about anywhere.

On the last day of October, I was fortunate to be in the beautiful city of Toronto. Yes, I realize that the protocol for residents of Montreal is to bash Toronto at every turn.

It's the city we are taught to hate. But let's try to be objective. Toronto is actually a great city, if not for the sea of Maple Leafs' fans.

I was in Toronto to meet other fans of the Montreal Canadiens. Believe it or not, there are many of them who live in or near "Leafs' Nation."

All Habs, Habs Tweetup, and a terrific guy who goes by the name @kuyaz on Twitter teamed up to organize an event for Habs' fans in the greater Toronto area to meet and watch the Hallowe'en night game between the Leafs and Canadiens.

@kuyaz is a zealous Habs' fan, a competitive hockey player and an event planner extraordinaire.

We first met at the very successful All Habs weekend held in Montreal for the NHL Amateur draft in June.  It was there that we experienced the potential of bringing together hockey fans who share a passion.

When I first arrived in Toronto, I found myself waiting outside an elevator in a parkade. When the doors opened the elevator was already occupied by three young men who, by their dress, were obviously Leafs fans.

So it goes for fans of a franchise that has not enjoyed Stanley Cup success for more than 40 years. At times, they can be a bitter bunch.

So, as Canadiens' fans, watching a Habs' game in a Toronto sports bar often means subjecting oneself to the ridicule of Leafs Nation. While comments from the Leafs' fanbase usually lack teeth, many Habs' fans just prefer to fore go the annoyance and watch the games at home.

To get people out of their living rooms, I suggested that our event be held at a Habs-friendly place called Kilgour's Bar Meets Grill. Kilgour's is a cozy establishment, run by brothers Andrew and Peter Kilgour, in the Annex area of Toronto.

The Annex is adjacent to the University of Toronto, so its residents range from students to tenured faculty, and are generally well-educated and affluent.

Peter is a proud Canadiens' fan who can tend bar, recall stats of Habs' players, and debate hockey with enthusiasts of any team who find their way into his place.

With Canadiens' memorabilia (including flags and banners) sprinkled throughout the bar and the plasma TV's loyally tuned to RDS or Hockey Night in Canada for every Canadiens' game, it's easy for a Habs fan to feel right at home inside Kilgour's.

On the night we were there, Peter was dressed in referee stripes and, playing his role enthusiastically, was quick to whistle down stray Leafs fans for overzealous cheering.

Andrew directed us to tables that the staff had prepared for us in a prime viewing location. Our waitress, Christina, is a Leafs fan (we'll forgive her for that) which led to some good-natured banter.

Kilgour's is definitely a place for regulars but once they saw us standing for the national anthems, we were quickly accepted into the fold. Some of them had even joined our table by the end of the game.

This is not a bar where the game is on in the background.  All patrons were actively engaged in the game which resulted in a great atmosphere.  There were a handful of Leafs fans including a few at our tables.  Some seemed bewildered at the enthusiasm of the Canadiens' crew while others embraced the rivalry and were equally vocal.

It couldn't have been a better night.  The Canadiens beat the Leafs 5-4 in a shootout.  The atmosphere in Kilgour's was electric.  Habs' fans from all over the Greater Toronto Area came out in numbers and celebrated a victory together.

While the Canadiens have their roots in Montreal, the team belongs to Habs' fans located throughout Canada and the world.  This is truly Planet Habs. 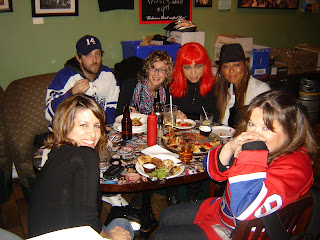 Our group was made up of a very diverse and lively bunch of Canadiens' fans (and a few Leafs' fans who managed to infiltrate our faction).

Here's a glimpse at a few of the evening's attendees with their Twitter names:

@21Gionta is a transplanted Montrealer who was perhaps the most demonstrative in her excitement during the game. While she has lived in Toronto for more than 20 years, she would not be anything other than a Canadiens fan.


@rgdot who, as a new Canadian, had developed a fondness for the Canadiens during his short stay in Montreal. He continues to follow the team religiously despite his move to Toronto.

@FlyersRule wouldn't miss a major fan event of her second favorite team driving in from Philadelphia to be at Kilgour's. She wrote an excellent article on her weekend experience here.

@Nock4Six was the most vocal of the Leafs' supporters in our group.  While drastically outnumbered, her "Go Leafs Go" cry could easily be heard amidst the Habs' chants.