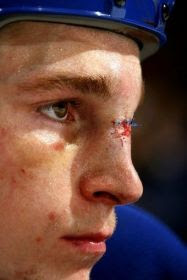 From time to time, I'll give a shout out of sorts to a guy who doesn't get a lot of credit for his hard work. Today, it's Rick Rypien of the Vancouver Canuck who has paid his dues, and always keeps on goin.

The undrafted Rypien spent four years as a member of the Regina Pats of the Western Hockey League. In 2005 he was signed by the Vancouver Canucks AHL affiliate, the Manitoba Moose. Rypien was quick to impress with his hard-nosed style of play, as he was signed by the Canucks in November of 2005.

The next few years of Rypien's NHL career was marred by injuries, beginning when he broke his fibula five games into his first stint with the Canucks. In training camp of Vancouver's 2006-2007 season, he broke his thumb in a fight against the Anaheim Ducks. After his 2 month recovery, the tough guy finshed the year with Manitoba, potting six points and earning 35 penalty minutes in 14 games. Once again, Rypien began the following season with the Canucks, but was sidelined after he broke his finger in a game against Detroit.

He split the rest of 2007-2008 season with the Canucks and the Moose. Starting the 2008-2009 year with Vancouver, Rypien's injury problems persisted, suffering a sports hernia just five games into the season. His recovery from his latest injury was lengthy, mainly due to the frustration caused by his frequent injuries. After a 70-game leave of absence, Rypien returned to the Vancouver lineup late in 2009, playing in the seven remaining regular season games and all 10 of the Canucks Playoff games.

Rypien signed two-year contract extension with Vancouver this off-season. Since then the Coleman Alberta native has appeared in 24 of the Canucks 34 games this season, scoring four points, and recieving seven fighting majors.