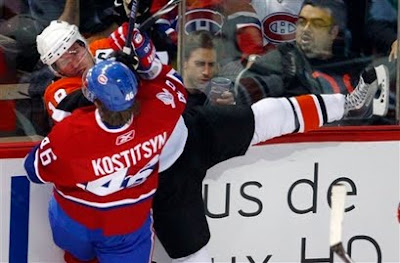 posted by Rocket
All Habs

A Canadiens' team record for fewest shots in a win was set tonight with 13. Is this what a Jacques Martin game looks like when played out according to plan?

We have been told that coach Martin prefers to use a puck possession strategy with an aggressive forecheck. He has even been quoted saying that a good offense is an effective defense. But after 30 games, I think it's fair to say that coach Martin's system does not match his words.

With a couple of days of practise, Martin was able to get his message across to his players. In the first period of Monday's game, the Canadiens' forwards came back to help out the defense. Habs were effective at getting in the way, chipping the puck out of their own zone, and limiting the Flyers to four shots in the first period.

But this defense first philosophy left little time for offense. Max Pacioretty was credited with a shot on goal, and his was the only one by the Habs.

The last time both teams totaled five shots in a period in a Canadiens game was Mar. 25, 1993 vs. Boston Bruins. And '93 turned out well, didn't it?

It was the also the second time this season the Habs managed only one shot in a period. The first was on Oct. 3, in a 2-1 overtime win over Buffalo.

In addition to the one shot on goal by the Canadiens, they had three missed shots, and the Flyers blocked one shot. So the Habs only directed five shots towards a very shaky Brian Boucher in the Flyers goal. It seemed like the Canadiens' players were so focused on the system that they forgot how to play hockey.

It was an odd game plan given that Philadelphia has been struggling offensively, with only two goals in their last six games. The Flyers had only won two of their last 10 games. But when given so much space, the Flyers' forwards were aggressive with their defense jumping into the play.

In the second period, the Canadiens scored on their third shot of the game. Tomas Plekanec fed a nice pass to Andrei Kostitsyn, who tied the score at one apiece.

The Habs took the lead when Max Lapierre led a two-on-one. Lapierre made a nice play to draw back the puck, let Braydon Coburn slide by, and sent a pass to Mike Cammalleri, who directed it past Boucher.

Georges Laraque got his 100th career assist on the play, and with an earlier fight, was two-thirds of the way towards a Gordie Howe hat trick. Laraque has not scored a goal in 49 games with the Canadiens.

Laraque may have won his meaningless, staged fight with Riley Cote in the first period, but he was not heard from when a Cote hit put Paul Mara out of the game with an "upper body injury". After the game, coach Martin refused to comment on Mara's injury but said that the defenseman would not make the trip to Ottawa on Tuesday.

With Mara's injury, Marc-Andre Bergeron was moved back to defense for the final two periods. It was Bergeron's power-play goal from Roman Hamrlik that gave the Canadiens a two-goal cushion in the third period.

Roman Hamrlik blocked as many shots as Boucher did in goal tonight. They each made 10 saves.

Boucher was pulled from the Philadelphia goal with 2:05 remaining. Josh Gorges' penalty for tripping gave the Flyers a six-on-four advantage for the final 1:20 of the game. Yet in that time, Philly didn't manage a shot on goal.

The Canadiens blocked 27 shots in the game. Carey Price was solid in goal for those shots that did get through with a great save on a chance by Mike Richards in the second.

The Habs continued their domination over the Flyers, having won the last 14 of 17 games between the two clubs.

It may have been a dull game, but the Habs are unbeaten in their second century with two victories over Boston and Philadelphia, allowing only two goals total.

Tuesday night, the Canadiens travel to Ottawa to face the Senators, who sport one of the best home ice records in the league.