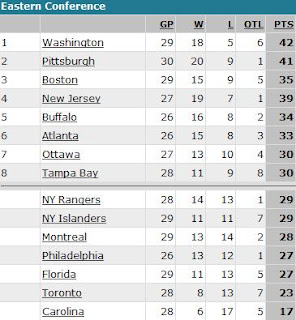 The New York Rangers were going to need a stellar effort from veteran goaltender Henrik Lundqvist if their offense failed to show up in Buffalo on Saturday.  It did, but the King was up to the task, stopping 36 of 37 shots to lead New York to a 2-1 road win.

The blue shirts had averaged just two goals per game during the course of a recent three-game losing streak.  They'd stay true to that average on Sunday as only Chris Higging and Ryan Callahan were able to beat the red-hot Ryan Miller.  But that would be all the Rangers would need as Lundqvist earned his first victory since Nov. 25.

The Sabres turned up the pressure in the third period, peppering 19 shots on goal.  All but one were brushed aside; Jason Piminville was able to ruin Lundqvist's shutout with :59 remaining in the game.