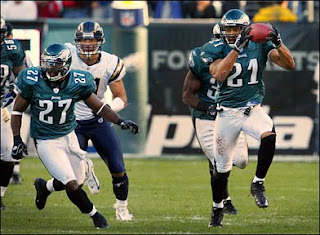 Any real fan can tell me what was going on here.


If you ask most fans in Philly what the keys to this game will be, you may be told that it doesn't matter. Apparently the season ended with a Week Nine loss to the Dallas Cowboys at home, dropping the Eagles to 5-3 with a 2-1 divisional record.

So for those of you who still think this season in salvagable, stick around and we'll see what it's going to take for the Birds to move to 6-3.

Be Creative With Secondary Depth

It is going to take some real creativity, innovation, and ingenuity on the part of defensive coordinator Sean McDermott to work with the lack of depth he now has in the secondary.

With Ellis Hobbs out for the season and Joselio Hanson serving a four-game suspension, Dimitri Patterson moves up from the fifth corner to the third and puts this team in a bad spot.

The Eagles did sign Ramzee Robinson and call up Jack Ikegwuonu from the practice squad, but between them there's only 19 games of playing experience—all belonging to Robinson.

That said, we could see a lot of Macho Harris and Quintin Demps lined up at corner over the next few weeks until Robinson and Ikegwuonu earn the trust of the coaching staff.

Chargers week was certainly not the week to lose depth in the secondary, but hopefully McDermott knows what he's doing and will be able to make up for it with some creative blitzing and coverages. If not, it's going to be a long day for the Birds in sunny San Diego.

Run the Football Up the Middle

Overall, the Chargers are not very good against the run, ranking 26th overall with just over 130 yards per game allowed. However, it's up the middle that the Chargers are most susceptible to the run.

With Jamal Williams landing on Injured Reserve earlier in the year, the Chargers have been scrambling to find a replacement who can eat space the way Williams could. However, the problem is that there is no one in the league who can play the position the way Williams can.

The Eagles need to take advantage of that and the duo of unimpressive linebackers manning the inside for the Chargers defense. They need to do that by running Brian Westbrook, LeSean McCoy, and most importantly Leonard Weaver right behind Herremans, Jackson, and Cole/Andrews.

As much as physical prowess obviously plays into this game, the psychological side cannot be overlooked. Phillip Rivers is known to lose his cool, it doesn't make any sense not to take advantage of it.

There's not really that type of guy on the Eagles defense, except maybe Asante Samuel, so someone is going to have to step out of their comfort zone and do a little yapping at Rivers.

Samuel is a good candidate, but as a corner he doesn't have a lot of interaction with the quarterback. A guy like Trent Cole could get into Rivers' head with a little talk, but again, he's not really that type of guy.

It might be a dirty move, but you've got to do all you can against a talented team like the Chargers. The Eagles would be fools not to take advantage of Rivers' hot head.