Every NBA free-agency market has its share of difference-makers, contributors and solid role players.

So even if you haven't heard the most flattering things about the upcoming crop of hoopers-for-hire, just know that there's still plenty of talent to be found (even if it's not quite as much as most offseasons).

An MVP and Defensive Player of the Year candidate and a first-time All-Star top the list, so let's see what our crystal ball has to say about their futures and that of a key contributor for a championship contender.

Everything's coming up aces during Davis' first go-round in Hollywood.

The Lakers are in the thick of the championship race, and they've done a masterful job of juicing the orange with both Davis and LeBron James. L.A. has dismantled opponents by 9.8 points per 100 possessions with its two stars on the floor (for reference, the Milwaukee Bucks have the NBA's best net rating at plus-10.6), as the pair continually puts opponents into impossible, pick-your-poison scenarios.

"They can do things together, given James's size and strength and Davis' mobility and versatility, that would make Magic Johnson and Kareem Abdul-Jabbar envious," Marc Stein wrote for the New York Times. 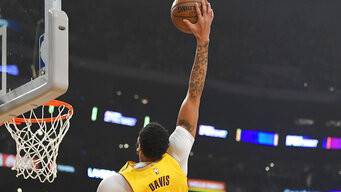 Given the roaring success of this season, it's hard to envision Davis wanting anything other than additional seasons with the Lakers. The only question is how he'll make that happen.

He has a $28.8 million player option he could pick up, or he could lock in his future on a full five-year max deal. But the most prudent play might be taking a three-year deal with an option on the third season, since that would allow him to re-enter the market as a 10-year veteran (making him eligible for the highest possible percentage of the cap) and keep the front office's feet to the fire as the 35-year-old James ages.

It wasn't necessarily clear that Ingram anchored the Pelicans' return package for last summer's trade of Davis, as Ingram was just one of many assets headed to the Crescent City.

Fast-forward to the present, though, and the first-time All-Star certainly looks like the top player New Orleans acquired. The second overall pick in 2016 has fully tapped into the skills and physical tools that have long tantalized scouts. He's suddenly bordering on unguardable with per-game contributions of 24.2 points, 4.2 assists and 2.4 three-pointers (on 38.4 percent shooting, no less).

He could be the perfect co-star for freshman phenom Zion Williamson, meaning New Orleans shouldn't let the restricted free agent out of its sights.

It doesn't sound like the Pels have any intention to, anyway. Back in November, executive vice president David Griffin told The Undefeated's Marc J. Spears the team had "every intention of keeping him long-term." In March, he hopped on the team's official Twitter account to label Ingram's playmaking ability "vastly underrated and...a lethal piece for us moving forward."

While New Orleans could make a calculated business decision to force Ingram to find an offer sheet in a market short on spenders, the risks outweigh the reward. If he inks an offer with an unfriendly structure or feels alienated by the team, that could be devastating for what looks like one of the league's top up-and-coming teams.

The Pelicans should've seen enough by now to greet him with a full max offer as soon as the market opens.

The Clippers know as well as anyone the type of impact Harrell can make in a featured-reserve role. Suffice it to say, it's substantial.

Harrell is one of only 10 players averaging at least 18 points, seven rebounds and one block. Everyone else on that list gets at least 30.2 minutes of floor time every night, while he logs just 27.8.

That creates a fascinating debate about what those numbers should mean for his free agency. Have the Clippers unlocked his ideal role and helped maximize his production? Or might he prove even more dominant with more playing time, as his 24.1 points per 36 minutes suggests?

L.A. clearly views him as a reserve. He has played 221 games since joining the team in a 2017 trade that sent Chris Paul to the Houston Rockets and only started 10 of them. The Clippers have to consider that when finding the right number for their offer to Harrell.

But if someone else sees starter potential in him, they might be more willing to spend.

The Charlotte Hornets seem like a logical landing spot if he takes his talents elsewhere. They need a go-to option on offense and a long-term fit at the 5 spot. Harrell, who hails from North Carolina, could scratch both itches and help build the excitement in the Kemba Walker-less Buzz City.