The New England Patriots are reportedly "confident" in quarterback Cam Newton's health ahead of his physical.

According to NFL Network's Ian Rapoport, Newton is in New England to take his physical and finalize the one-year contract he agreed to earlier this week with the Patriots. The deal is worth a base of $1.75 million, but he can earn up to $7.5 million with bonuses and incentives.

The Patriots reportedly anticipate "no issues" with his physical.

The Carolina Panthers released the 31-year-old Newton this offseason in favor of signing Teddy Bridgewater in free agency. With few teams having a need at quarterback, it wasn't until this week that the three-time Pro Bowler found a home.

The former Auburn standout posted the three worst QBR totals of his career from 2016 to 2018 and was on the worst pace of his career through two games last season, although he didn't play enough to qualify.

In 2018, Newton posted a career-best completion percentage of 67.9 percent, but his yards per completion of 10.6 were a career low. That likely had something to do with the shoulder injury that nagged him for much of the year.

Last season's sample size was small, but Newton looked abysmal through two games, as he completed 56.2 percent of his passes for 572 yards, no touchdowns and one interception while also rushing five times for minus-two yards.

Newton is one of the all-time great running quarterbacks, having posted 4,806 yards and 58 touchdowns on the ground during his nine-year NFL career, but it's unclear if the foot injury will linger and take that important weapon out of his arsenal.

Even though Newton comes with substantial risk, much of it is mitigated by the fact that the Patriots are set to pay him so little.

At worst, Newton may serve as a backup to second-year man Jarrett Stidham this season and give Bill Belichick a veteran option in case the youngster struggles. At best, perhaps Newton will return to Pro Bowl form and serve as a suitable replacement for Tom Brady, who signed with the Tampa Bay Buccaneers. 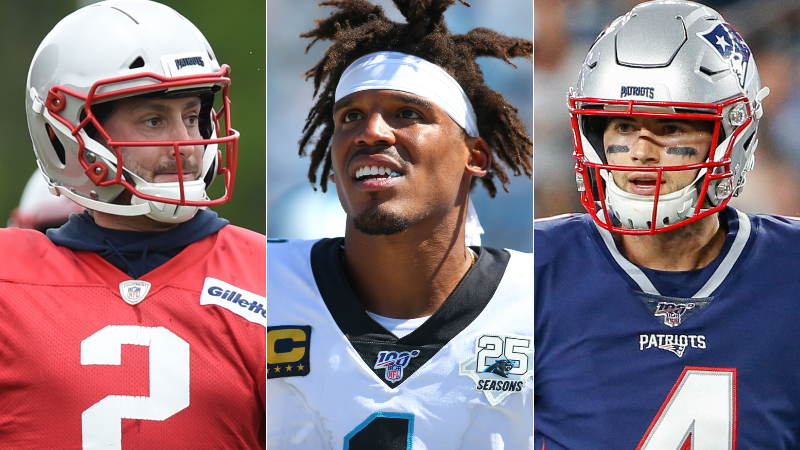