Bruno Guimaraes couldn't hold back the tears following Brazilian minnows Audax's relegation to the Sao Paulo State Championship second division in 2017. It was not the farewell he had anticipated after emerging as a breakout star that season.

Having caught the attention of scouts from all over the country, the defensive midfielder knew he would soon be on the move.

The hype around him had escalated to such a point that when he finally decided on a loan transfer to Athletico Paranaense, he saw other teams attempting to hijack the deal until the very last minute as he boarded a commercial flight to undergo his medical in April that year.

While taking his seat, Guimaraes found out that Athletico's fierce rivals, Coritiba, had somehow managed to place their sporting director by his side in the plane with a lucrative offer in hand. Among other things, it included a four-times-higher salary than what Athletico were offering.

As tempting as it was, the 22-year-old kept his word, joined Athletico and rejected Coritiba's overtures.

Guimaraes has been reaping the fruits of that decision ever since. 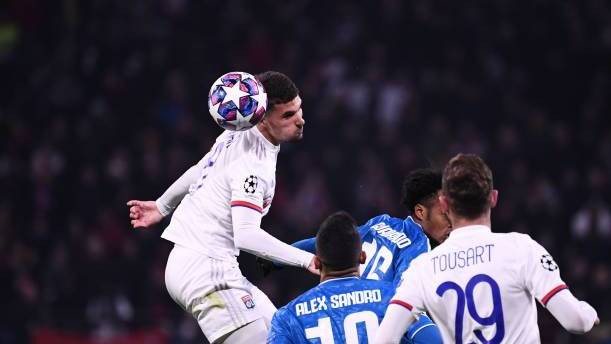 Despite arriving as a relatively unknown teenager, Guimaraes quickly established himself as a key member of an Athletico side during one of the most glorious runs in the club's history.

In the past couple of seasons, the boy from Rio de Janeiro led the team to the Copa Sudamericana and Copa do Brasil titles, becoming a fan favourite and earning near-legendary status despite his tender years.

It was no surprise, then, that Lyon sent a delegation to South America's pre-Olympic tournament in Colombia earlier this year to make sure he didn't slip from their hands. Lyon's proactive approach proved crucial in completing his signing for a reported fee of €20 million.

Guimaraes was on his way to France, and this time, there would be no commercial flight.

Instead, Guimaraes took a private jet straight from Colombia with his parents and entourage. There would be no other teams bothering him during the 10-hour trip, and even any fresh flirtations would have fallen on deaf ears.

The Brazil under-23s captain had already settled his future after getting a phone call from Juninho Pernambucano, Lyon's sporting director, and hearing the Lyon legend say that he would make Guimaraes "the best central midfielder in the world."

A host of clubs were interested in Guimaraes, but none of them showed the same desire as Lyon to go get him.

Atletico Madrid had a first refusal clause, but despite a last-gasp bid, Guimaraes said they "never sent me a message or gave me a call to ask how I was doing." Chelsea, Arsenal and Benfica failed to lure him, too.

"Nothing in the world can beat a face-to-face and straightforward conversation," he tells Bleacher Report.

"It undoubtedly makes a difference. Since our first contact, Juninho was transparent with me and my family, explaining the club's project and what they had in mind for me in the future. This approach played a huge part in my decision to join Lyon. From the very beginning, I felt welcomed here."

One of the first things Guimaraes asked Juninho was whether he could wear the No. 39 shirt in his new home.

It's the same taxi number his father, Dick Gomez, drove for more than two decades in Rio, sometimes travelling 448 kilometers with his wife, Marcia Moura, to watch their son play for Audax in Osasco, an industrial suburb of Sao Paulo, during the weekends.

With squad numbers in Ligue 1 not going beyond 30, Juninho had to ask the French Football authorities for special permission, which was eventually granted.

Guimaraes has repaid Juninho on the pitch and become an instant hit. He grabbed the headlines after his performance in the 1-0 win against Juventus in the UEFA Champions League and then in the 2-0 victory over Saint-Etienne in the Derby du Rhone.

"He was very well trained, something that is rare in Brazil," Juninho told RMC Sport in February.

"He has a lot of humility, always wants to learn and has this ability to see situations beforehand. When I arrived at the beginning of the season, I said that you need a player like him in front of the defense, who balances, provides rhythm, changes side, knows how to keep the ball from time to time.

"He's a really very good player and has the potential to become a great one."

Suddenly, as local Lyon newspaper Le Progres wrote, "Guimaraes-mania" was in full swing. He has been described as the most impressive midfielder to have featured for OL since the Portuguese Tiago Mendes in the mid-2000s.

France Football went even further: "There was a Lyon without Bruno Guimaraes during six long months and now there is a new one, much more attractive."

Even his new team-mates fell in love with him at first sight. "He provides real importance to the team game. He puts in a lot of effort, he pushes between the lines and constantly offers solutions for our defenders," fellow midfielder Houssem Aouar explained in March. "The whole team game is more fluid with him in it."

Guimaraes managed to make such an impact after only five games, right before the coronavirus pandemic disrupted all sporting events.

He can't help but to consider himself "the most hurt footballer by the pandemic," especially as Ligue 1 has been cancelled despite many other leagues slowly returning to action.

At the time football was first suspended across Europe, Guimaraes had earned his first call-up to Brazil's senior team and was starting to make waves abroad. He was hoping to lead Lyon to the UEFA Champions League quarter-finals and end what had been a memorable season with a gold medal at the Tokyo Olympics.

On top of all that, he is already reportedly on Barcelona's radar after impressing the during his side's 1-0 victory over the Catalans' former rival Cristiano Ronaldo and Juventus in February, according to Spanish newspaper AS.

And then, in the blink of an eye, he had to put all this on hold.

"It has been very complicated," Guimaraes admits.

"Playing in the Champions League has always been my desire. I finally had this opportunity, we did well, but now we don't know when we will get to play the second leg [against Juventus]. I'm looking forward for all this to be over, so we can be able to go back to what we love as soon as possible.

"I have no doubt that the decision to not resume the Ligue 1 can affect our preparation for the game. We have to wait for UEFA and maintain our form until then.

"Regardless of that, every day I'm more confident that I've made the right choice by signing for Lyon."

Guimaraes' dream start to life hardly came as a shock to those who witnessed his meteoric rise in Brazil.

Over the past year, scouts from several European big guns were invited to watch him play in Athletico Paranaense President Mario Celso Petraglia's box in Curitiba. Among them was a representative from Chelsea, who have close ties with Giuliano Bertolucci, one of Guimaraes' agents.

Arsenal held talks through sporting director Edu Gaspar as well, but they were not prepared to make an offer during the winter transfer window.

For some time, the Premier League seemed like the natural destination for a prodigy. Despite playing in a deeper role, Guimaraes has been compared to Manchester City maestro Kevin De Bruyne. But any move to England will have to wait a little.

"I used to take English classes at Athletico. As soon as I got to Lyon, however, the club spoke to me about learning the French language as fast as I can. I can already say a few things and understand others. It's an important step to fully adapt," Guimaraes explains.

Wherever his future takes him, he's surely primed to assume a leading role on the pitch.

"We currently lack a midfielder who can distribute balls. Someone like [Paulo Roberto] Falcao in the past. Or like De Bruyne nowadays, capable of playing sometimes lower to help Casemiro, sometimes higher to bring more binding, creativity, speed and rhythm," Brazil coach Tite told France Football of his side in March.

"Bruno has enormous potential and can be that player."

The No. 39 would need to fill a void that others like Barcelona's Arthur, City's Fernandinho, Liverpool's Fabinho and Manchester United's Fred have been unable to in the national team. He's at the top of a list of candidates that also includes Aston Villa's Douglas Luiz, Gremio's Matheus Henrique and Flamengo's Gerson.

It's just another challenge for the boy whose talent has already seen clubs fight for him in the skies, and any interested parties will inevitably face similar competition in the near future.