Divock Origi has already cemented his place in Liverpool history with memorable moments like scoring two goals in the second leg of the Champions League semifinal last May to beat FC Barcelona 4-3 on aggregate.

Liverpool went on to capture the UEFA Champions League title for the first time since 2004-05.

The Belgian discussed the comeback against Barcelona and answered fan questions about Liverpool, manager Jurgen Klopp and a number of other topics in a Bleacher Report AMA.

@Cheesepizza: What was the dressing room like after the semifinal vs. Barca? How did everyone celebrate?

Some were silent, some were screaming, some were dancing. The overall feeling was something special just happened.

@TheLand216: How many times have you watched the highlights from THE Barcelona game?

Wow, um, quite a few times. I like watching the behind the scenes and seeing everyone's reaction.

@Austinjamati: What was a more meaningful goal for you: Your 2nd goal against Barca in the UCL semifinal or your game-sealing goal in the UCL final?

They're both crazy important goals. But the Final goal was beautiful. You dream of that scene your whole life and for it to happen is just amazing.

@nshimaboy: Do you ever think about how many people were overjoyed by your goals last season?

I'd say the identity of the club and city to keep on fighting. Everyone is a lion, so it was natural. People weren't saying it to each other, but we felt like it was going to happen.

@Memette1996: There's no way you were as chilled as you looked after your UCL final goal, right?

I spoke to my cousin before and he said you need to jump on the pile if that happens. But, really I was so calm and time stopped in that moment. I was quite zen.

@Another_brown: How great are Klopp's hugs?

They're very warm hugs. One of the warmest I've had in my football career. He's quite good at his hugs. Not too long. Not too short.

@Gboyd213: Are you a fan of any American sports teams?

I just like NBA, NBA and players. I'm not a fan of any particular teams.

@CR7GOAT7: Do you like the NBA, and if so, what is your favourite team?

They're so different, so I can't pick. If they were similar players, I would make a choice. It just feels wrong picking one.

@JohnDavid06: Hey Divock, which team would be the sweetest comeback victory to score the winning goal against?

@Lwilso6679: What do you think of your FIFA rating?

I wasn't happy about that, to be honest. But again, someone needs to go and speak with them. Especially my pace. I'm top 10 speed in the Premier League so I need a better rating.

@ModricHazard: Thanks for doing this. What's the hardest game of your career?

World Cup 2014. QF. I started the game against Argentina. I was 19 and it opened my eyes to real high-level football. Messi, Mascherano, Di Maria...unbelievable.

We're both calm and cool. He has a lot of positive energy and a smile at all times and I'm the same. We vibe that way.

I'm still pissed at what happened, but I have to say Atletico Madrid.

@362289: Thanks for doing this. Why do you think you always manage to score when it matters most? You are forever a club legend and thanks for everything - I hope you get a 30-goal season for Liverpool!

I think it's fate that things happen the way they do.

@MajinKyoSan: If you had the chance to play with one footballer, alive or dead, who would it be?

Brazilian Ronaldo when he was at Inter.

I don't think I have one. I don't want to pick anyone's wife and get in trouble. Haha.

@Divock_Origi_MVP: How, if at all, does your faith influence your day to day training and games?

It's behind everything that I do and who I am. It influences everything I do.

@CoolKuba99: Who's your favourite player of all time?

Wow that's a hard one! If I had to pick one...from the ones that have retired...the Brazilian Ronaldo and from those still playing, Portuguese Ronaldo. x

@BenBlackmore: Have you ever driven your car round a bend at speed and said "CORNER TAKEN QUICKLY"?

Hhahahah. No I've never said that. I've heard it, but not said it. So many have said it in Liverpool, I can't even count. x

@Jgoldman85: What's most important for settling into this Liverpool team when coming from another club?

Understanding the philosophy. The game philosophy, the club philosophy and that of the city.

@Romithehomie?: Who is your favourite non-football athlete?

At the moment I have three. Jordan, he's the GOAT. LeBron, unbelievable on and off the court. And Steph. If I had to pick one it's Jordan.

@Lildipper: Hey Divock, who's your best friend on the team?

I'm gonna pass on that one. I don't like picking just one. I speak so many languages and can talk to all of the guys. I'm actually everyone's best friend.

@Timonthy1113: How does the atmosphere at Anfield compare to any other stadium on European nights?

It's hard to describe. It's a different energy level. It's like you're playing with 12 men. It's a cheat code. A big boost.

@Sammyfriedrich: Do I have your blessing to name my first born child Divock?

Yes of course. No problem. I've seen a few people who have done that. It came from the name Vlade Divac. My parents watched him play and wanted to personalize the name a little bit.

@Bucks8straight: What moment inspired you as a kid to play football?

My dad winning the championship with Genk in 1998. Their first time with the title and I saw the celebrations and wanted that for myself.

@Anothersadvol: Who is the funniest guy on the Liverpool team?

We have a load of funny guys, but either Robertson, Gini or Lovren.

@ElectronMan: Hey Divock, you have a cool name bro. How does it feel to hear fans chanting your name at Anfield? Also are you OK to be called 'King of the Comeback?'

First of all, thanks for liking my name. It's awesome that the fans appreciate what you do. And feeling the love makes you want to go harder.

@RQZ: Do you wonder what would have happened if the corner was taken slowly?

I dunno?! Maybe there would've just been another corner.

@BobbyFirmi9: When are you gonna get the dreads back?

That era is officially done. It's the start of a new era. I kept a small piece of the dread in a secret place where nobody can reach it.

@J_gross: Have you ever gone to see the dolphin in Bruges that was named after you?

I didn't have the time, and then the dolphin passed away unfortunately. I wouldn't mind another one being named after me.

Pasta. I can eat it every day. Bolognese, Carbonara. Spaghetti. All of it!

@Barcsenal_10: What's your favourite thing to do during the off-season. Also thanks a lot!

Re-charge. I usually take a couple days alone and switch everything off. Just zen and then after that I spend time with the people I love. Then I prep with my coaches.

I don't want to do a top 5 in case I leave anyone out. Biggie, Tupac, Jay Z, J Cole, Drake and Nas are all legends.

A nap especially before night games. Prayer and music.

@LFC973: Who is the best all-round footballer at the club?

Bobby is quite complete. He can play mid, forward, left and right. Can link up and play one-on-one. So it's probably Bobby.

@JoaoFelixGOAT: Hy Divock, are you the fastest in the team?

They have stats, that say I'm the quickest. Which surprises a lot of people. But peak speed it's me they say.

@Shyam1: You're clearly the 🐐 but do you have any Liverpool legends who inspired you?

I'd say, ummm, Gerard what he meant and means for the club. I like Torres a lot and his time at Liverpool. I liked Suarez. I'd say them.

Ending up with Liverpool is a dream come true.

@Barbequechicken: Who has the most potential out of Liverpool's academy players?

I wouldn't want to pick one, because they're all amazing. Pedro Chirivella, the way he sees the game is amazing. Curtis Jones, he's unbelievable one-on-one. Harvey Elliot is 16 playing like he's 26. That's just to name a few. Liverpool is blessed with some great, great talents.

Five months before the Champions League semifinal, Origi had an iconic moment when he scored the game-winning goal during injury time in Liverpool's 1-0 win over Everton.

Liverpool rewarded Origi for his efforts with a long-term contract extension from the Reds in July. He's appeared in 22 of 29 Premier League games, scoring three goals, before the season was suspended due to the coronavirus pandemic.

Liverpool could have over 21,000 fans in Anfield by start of next season 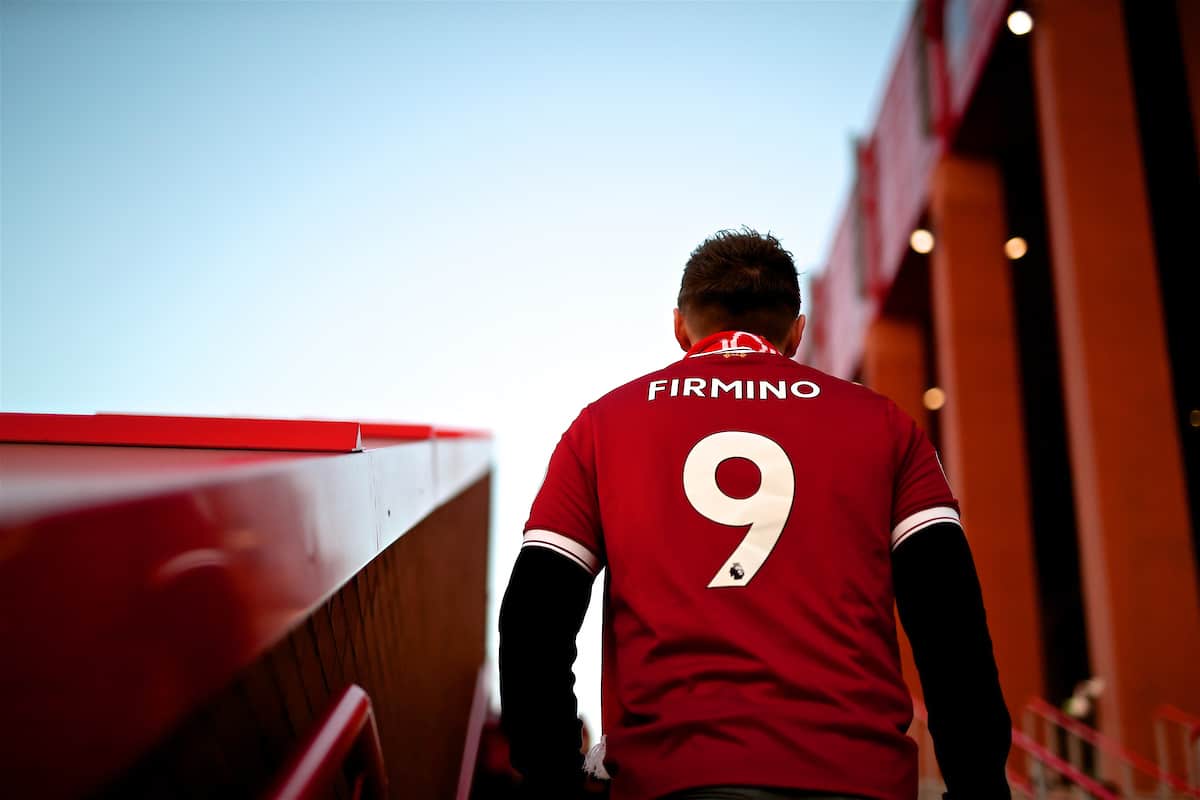 Liverpool could have over 21,000 fans in Anfield by start of next season Mohamed Salah faces disappointment but Liverpool should not worry

Mohamed Salah faces disappointment but Liverpool should not worry