Whew. People's heads will still be spinning after such an explosive start to NFL free agency.

Tom Brady has taken his talents to the Tampa Bay Buccaneers. Philip Rivers is off to join the Indianapolis Colts. Teddy Bridgewater is on the Carolina Panthers and pushing Cam Newton out the door. Drew Brees is...still a member of the New Orleans Saints, because the football gods knew we needed some sliver of stability in our lives.

The NFL's new league year hasn't even started yet, and already the football world has been flipped on its head. That goes for the 2020 draft board, too, since multiple first-round selections have changed hands during the free-agency frenzy.

That means it's time to update our mock draft, so let's get to it. 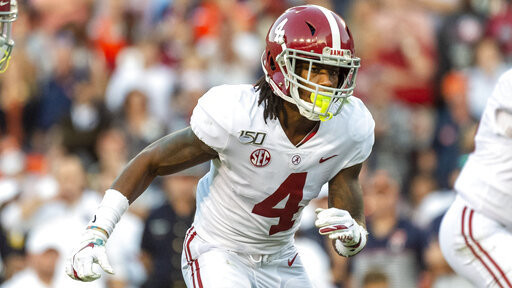 Targets for Teams Who Traded for Picks

The Niners sacrificed the anchor of their elite defense (defensive tackle DeForest Buckner) in part to land this selection from the Indianapolis Colts. San Francisco better put the selection to good use considering Buckner might make annual Pro Bowl trips for the foreseeable future.

The 49ers should have a good idea what they want to do with this pick. It's possible they use it to help replenish their draft stock—they don't have second-, third- or fourth-round picks—but that seems likelier at No. 31. The chance to get a difference-maker might be too good to pass up at No. 13.

Depending on how the board breaks, they could target a top cornerback, a Buckner replacement or even Joe Staley's eventual replacement. But adding an elite wide receiver prospect alongside Deebo Samuel might shift this offense into overdrive.

Kyle Shanahan could do wonders with Henry Ruggs III's blazing speed. CeeDee Lamb's hands might make him a favorite of Jimmy Garoppolo. But Jerry Jeudy is the best all-around receiver in this class, and he looks like a special talent.

"Jeudy can play inside or outside but offers a unique ability to both widen or lengthen the field from the slot," NFL.com's Lance Zierlein wrote. "His transition from deep threat to volume target in 2019 should help sell teams on his ability to become a Pro-Bowl caliber WR1 who can help his offense on all three levels."

Add Jeudy with Samuel, and San Francisco has a pair of matchup problems at wide receiver. Plus, it has arguably the league's top tight end in George Kittle, not to mention a multifaceted ground game that just produced the second-most rushing yards per game.

If the Niners can be better than last season, when they won 13 games and held a double-digit lead in the fourth quarter of the Super Bowl, this is probably the pick that makes it happen.

The Vikings had an elite wide receiver tandem in Stefon Diggs and Adam Thielen. Now, they're down to just the latter portion of that pairing.

Diggs and a seventh-round pick are off to join the Buffalo Bills, who sent back four picks (three this year, one the next) to Minnesota, including the 22nd overall selection.

Do the Vikings turn around and spend this pick on Diggs' replacement? Given the wealth of wide receiving talent in this draft, it's certainly possible. But with picks 22 and 25 in hand, they might first focus on fixing their Xavier Rhodes-less secondary, then turn their attention to their offense (either with a receiver or an upgrade on the offensive line).

Kristian Fulton has the size and skill to help fill any voids in this defensive backfield. Any speed concerns that existed were erased at the combine, when he zipped through a 4.46-second 40-yard dash. That should've elevated both his ceiling and his floor.

"Fulton was a bit of a late bloomer, but he came into his own during the ladder portions while in Baton Rouge," Jordan Reid wrote for The Draft Network. "... He still has strides to make as far as playing the ball in the air and improving his play strength, but if he's able to improve in those areas, he has the makings of being a high-end starter on the next level."

If C.J. Henderson somehow falls to this pick, the Vikings would surely pounce. But if our draft board holds true, Fulton presents the best-possible use of the incoming draft pick.