But it didn't always look like he'd get near a potential title again.

Even so, the 49ers named Shanahan their head coach a day later.

As The Lion King taught everyone: "The past can hurt. But the way I see it, you can either run from it or learn from it."

Shanahan spoke publicly about his role in the Super Bowl letdown shortly after at the 2017 NFL Scouting Combine, telling reporters:

"Mainly with the second half to watch through it so I could ... when you see things live, you want to make sure watching the tape you confirm what you saw. It went pretty much how I thought.

" ... I know it didn't work out the way we wanted. Every time it ends that way, you're going to second guess everything that you did. I'm proud of what we did, why we did the things we did. One thing I learned from it is I hope that opportunity comes again, because it's a fun thing to be a part of."

Well, he and the 49ers are one step away from the Super Bowl after Saturday's 27-10 dismantling of the Minnesota Vikings at Levi's Stadium in Santa Clara, California.

No one ever questioned Shanahan's aptitude for the game. He's a brilliant play-caller and has been for a long time. He grew up around the sport and absorbed everything from his father, Mike, and multiple stops on other coaching staffs. His vision took time to be realized, though.

The 49ers finished 6-10 that season and were worse last year with a 4-12 record. Granted, injuries played a significant part in the team's downturn.

However, coaches must constantly learn and adapt or get left behind. Shanahan has shown tremendous growth since being the goat of a historic Super Bowl loss and starting his head coaching career with a long losing streak, and that growth was readily apparent in the team's latest victory, starting with how the 49ers manhandled the Vikings.

The biggest problem stemming from the Falcons' ill-fated Super Bowl performance was a failure to effectively run the ball in crucial situations to chew up the clock. Yes, the NFL is a passing league, but there are times when an offense must assert its will. Shanahan's play-calling didn't set up his unit for success in that title game.

How things have changed.

With quarterback Jimmy Garoppolo struggling at points and the 49ers leading 17-10, Shanahan called eight straight running plays. The passless drive resulted in a touchdown that extended the lead to 24-10. The physical approach deflated the Vikings, who never recovered.

How Shanahan sets up his ground game is simply awesome. His entire scheme is built around the zone-stretch. Offensive linemen run their assignments laterally, with the end man trying to hook the edge-defender. The running back's aiming point is the outside hip of the final blocker at the end of the line of scrimmage.

The Vikings run the same scheme—well, they have the same base plays. The difference lies in how Shanahan adapts throughout a contest, as Dakota Football's James Light noted:

The difference today is the volume &amp; design of Shanahan’s run game vs Vikings/Kubiak. Wide Zone gets shut down for MIN &amp; their OFF is paralyzed. 49ers run Power, Power Lead &amp; Counter to complement Wide Zone.

As Light mentioned, Shanahan's system contains counterpunches. Every scheme has its pet plays and comfort calls. Sometimes those don't work. It's how a play-caller reacts at that point that's most important. The Vikings' talented defensive front—which consists of three current or former Pro Bowlers—didn't have an answer. San Francisco ran the ball 47 times compared to 19 pass attempts.

"We thought the team who had over 30 runs would win this game," Shanahan told reporters after the victory. "We truly look at that as a team goal."

Shanahan knew exactly when to step on his opponent's throat. He could do so because he set up the situation so beautifully. San Francisco didn't come out running the ball. Instead, Garoppolo started hot and completed five of his first six passes. The approach served as a tendency-breaker since the 49ers finished the regular season with the game's second-best ground game.

The same attention to detail doesn't dissipate when Shanahan attacks opposing secondaries. San Francisco's first score Saturday was a perfect example. The design of Kendrick Bourne's three-yard touchdown reception was simple yet spectacular, because Shanahan placed each of his players in a position to succeed.

Each component set up the next.

The offensive line slid left to properly protect the quarterback from the shifting defensive front. The Vikings brought a dog off the edge with outside linebacker Anthony Barr. At the snap, tight end George Kittle motioned across the formation. The movement achieved two goals. First, Kittle became the primary blocker to stop Barr. Second, safety Anthony Harris followed Kittle, since Minnesota was in man-to-man coverage.

The defensive back's movement opened a back-side throwing lane. On top of that, Garoppolo's play-action fake held the linebackers at their pre-snap depth. Thus, Bourne only had to beat cornerback Xavier Rhodes off the snap on a slant with the cornerback shaded to the outside.

Garoppolo delivered the pass, which set up the offense later to attack the Vikings with the aforementioned smashmouth approach. So much of building a successful offense relies upon sequential play-calling.

Plenty of coaches are great when working off scripts. In-game adjustments, corrections and little deviations made throughout a contest are where truly great play-callers separate themselves. Shanahan has been a top play-caller for a long time.

But he wasn't always ready to take the reins, as he admitted earlier. He had to learn from his earlier experiences to reach this point. Some coaches would have grown frustrated when the Vikings answered the 49ers' initial score or after Garoppolo made a poor decision and threw a second-quarter interception.

The same coach who was once considered high-strung kept a calm, cool demeanor throughout the contest and had an answer for every situation. Sure, he and his offense had help from a tremendous defensive front and coordinator Robert Saleh's defensive play-calling. At the same time, the 49ers are playing great complementary football—which, assuredly, is worked into the overall game plan.

"It's a little bit of both," Shanahan told reporters. "That's how it always works out. It's easier to get a lot of runs when you get the ball back a lot. If you don't convert on third down, that's not going to happen either. ... Our plan was to be like that [aggressive running the ball] and our defense made it a heck of a lot easier."

Head coaches are forced to grow into the position. The NFL's narrow pathway toward earning said position doesn't allow them to fully understand the breadth of leading a billion-dollar organization. Great play-callers and positional teachers don't always translate, because the required skill sets aren't one and the same.

Shanahan's growth as the 49ers head coach shows he's improved in numerous areas. Specifically, he better understands situational football and knows how to handle those pressure-packed moments far better than ever.

When those two traits are added to Shanahan's obvious mastery as a play-caller, the 49ers will hold a significant edge over whoever they face through the rest of the playoffs.

The latest Lockytown podcast teaches you how to be the MVP of your Super Bowl Party... and how to spot the LVPs of the day 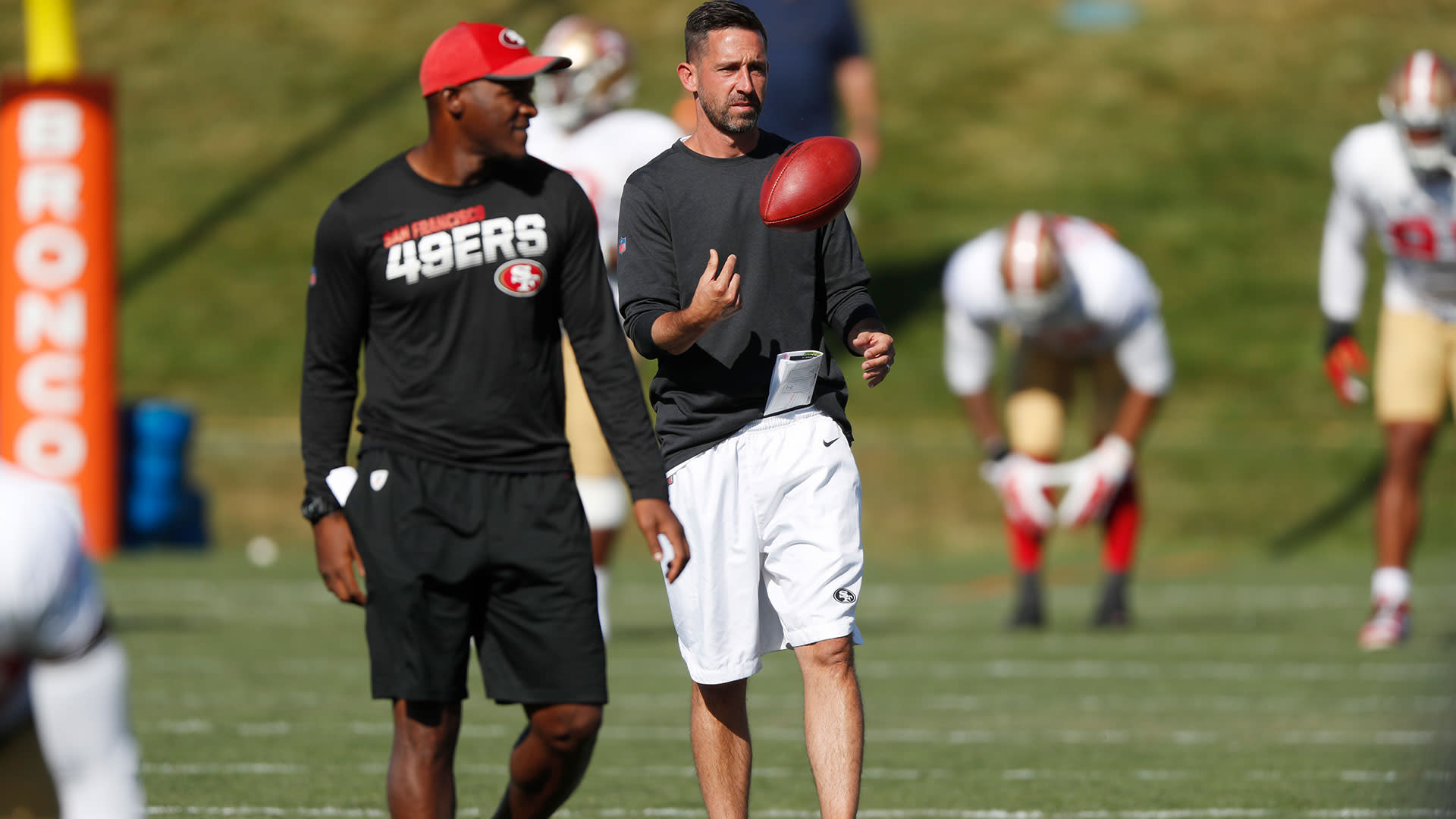 When Mahomes Becomes a RB, Will 49ers Treat Him Like One?

When Mahomes Becomes a RB, Will 49ers Treat Him Like One?