Thursday night marked Kristaps Porzingis' first game at Madison Square Garden since he was traded to the Dallas Mavericks in January, and he received a not-so-warm reception from New York Knicks fans.

After a 106-103 loss, Porzingis declined to say whether the fans' hostility toward him was fair or not, adding, "It is what it is."

"I don't know if their reaction is fair or not. It's what they know, it's what they've heard. It is what it is" - Kristaps Porzingis on the boos he heard at MSG https://t.co/YJTPbHxbax

It was clear right from the start that Knicks fans were going to be on Porzingis all night, as they heavily booed him during pregame introductions:

Knicks fans boo KP during intros in his first game back to MSG 🗣 (via @MasterTes) https://t.co/2mckyCz4YP

During the game, New York fans directed a NSFW chant in the Mavericks star's direction:

Porzingis didn't let the crowd bother him, though, as he put up 20 points on 7-of-17 shooting: 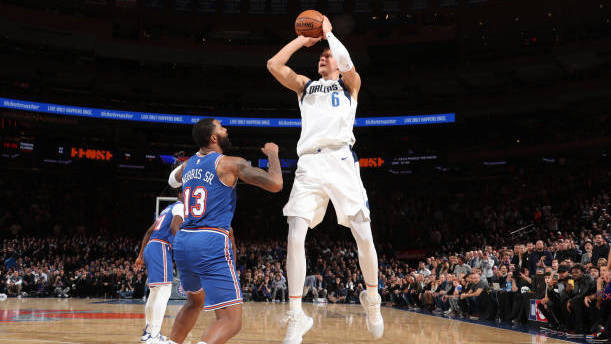 It wasn't that long ago that Porzingis was a beloved athlete in the Big Apple.

Taken fourth overall in the 2015 NBA draft, the Unicorn showed no shortage of potential during his time in New York. He averaged 17.8 points while shooting 36.1 percent from three-point range over his two-plus years on the court.

However, the 7'3" forward suffered a torn ACL in February 2018. That would be the last time he would put on a Knicks uniform.

Porzingis was traded to Dallas 11 months later as he was recovering from his knee injury. Knicks president Steve Mills said in May that Porzingis had demanded a trade, threatening to return to Europe if the team did not move him within seven days:

Interesting new information on the Porzingis trade from today’s JPM speaker event with Scott Perry and Steve Mills KP threatened to go back to Europe if not traded within 7 days Scott and Steve had trade offers lined up dating back to last September https://t.co/JGp1EQQrUV

Mills previously told MSG Networks that Porzingis had made it known he would not re-sign with the team.