What if I told you there was a Jalen Ramsey-type cornerback prospect roaming the halls at Ohio State? That's what NFL scouts believe the Buckeyes have in junior Jeff Okudah.

"Pat Pete. Ramsey. Whoever you want to compare him to, go ahead," said one area scout tasked with scouting Ohio State. "He's better than any dude that's come out of there."

That's high praise for a school that rightfully claims the DBU title.

"We're talking about a kid who enrolled early and was a scholar athlete as a true freshman," said the area scout. "At most schools he starts right away, but [Ohio State] had Denzel Ward and Kendall Sheffield in there. He's the most naturally gifted cornerback I've seen since Ramsey—but he's not going to worry you with his mouth." 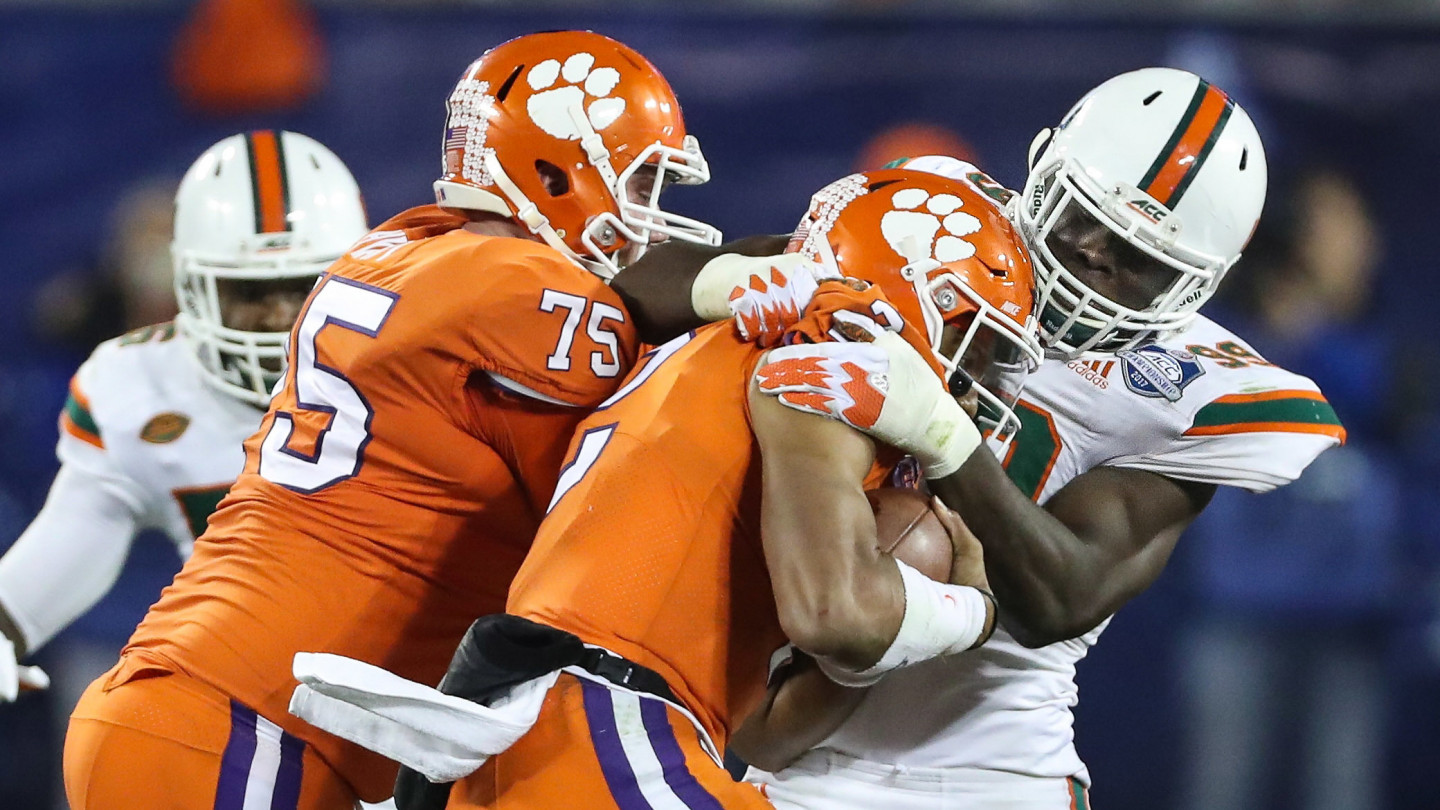 The Ramsey comparisons are common among scouts. Both had roles as true freshmen at schools where defensive backs are legendary. Ramsey saw more action in his frosh year at FSU, but Okudah's quiet leadership and toughness on the field caught eyes in his sophomore season. There aren't many college cornerbacks with his combination of size—bigger than Ward (5'11", 190 lbs)—speed, football IQ and smoothness in transitions.

Scouts have noticed; which is why there are Patrick Peterson and Ramsey comparisons.

Following a 2019 class with just one cornerback (Deandre Baker) drafted in Round 1, Okudah has a chance to be a top-three pick, besting his former teammate Ward (2018 No. 4 pick).

"I was there for Ward and Marshon. Okudah is what would happen if you combined their positive traits," said a former Ohio State assistant coach.

NFL teams will happily sign up for that combination early in the 2020 draft.

—Could O.J. Howard and A.J. Green be on the move? In conversations with scouts this week, that's been the hottest rumor, with a few scouts even asking what we've heard. Howard hasn't been used by Bruce Arians in Tampa Bay and could help the Bucs fetch much-needed draft picks.

Green hasn't suited up for the Bengals yet this season due to an ankle injury, but several contacts around the league believe a contender (San Francisco, New England) could make a play for him.

However, it remains unlikely:

HC Zac Taylor says the Bengals don't plan on trading A.J. Green: "I've heard the speculation. We are not trading that guy." https://t.co/1rfBJ0VLWO

—Earlier this week we released a list of the hottest names in coaching based on conversations with league insiders. Two names were added in mid-week conversations: John DeFilippo (OC, Jacksonville) and Gary Kubiak (Asst. HC, Minnesota).

DeFilippo was a hot name when he took the offensive coordinator job last season with the Vikings, but a disagreement on strategy with head coach Mike Zimmer led to his dismissal.

One source explained that the turnaround of Dalvin Cook's career and the rushing output in Minnesota are in large part Kubiak's doing—which is backed up by his track record of producing 1,000-yard rushers in his past coaching jobs.

Since the Jaguars lost Nick Foles to injury, DeFilippo has helped a sixth-round quarterback from an Air Raid offense became one of the hottest names in football. Gardner Minshew II mania could very well help DeFilippo finally land a head coaching job.

A full week at home means updating the rankings and getting caught up on film study. Here are my current top 32 players for the 2020 draft.

If you asked six weeks ago, there's no way I would have thought Florida vs. LSU would be a game matching two of the Top 10 teams in the nation, but here we are.

For scouts, this one is huge. LSU quarterback Joe Burrow gets his first real test of the season against a very good Florida defense. On the defensive side of the ball, will Tigers safety Grant Delpit break out of his early-season slump against a Florida team that runs the ball well?

The Gators' pass-rushers (Jabari Zuniga, Jonathan Greenard) can build on their performance in Week 0 against Miami with another big game on a national stage. Both have legit pass-rushing moves, and if they can frustrate Burrow, the Gators might just pick up another upset.

Texas wide receiver Collin Johnson opted to return for his senior season with a chance to improve his draft stock and perhaps win a Big 12 championship. But Johnson has been plagued by injury, while fellow senior Devin Duvernay has risen to the top of the Texas passing game targets list.

Johnson is a massive receiver at 6'6" and 215 pounds with good agility and strength numbers from his junior pro day, but it is difficult to progress to the NFL while on the injured list, and that's where he has been. He reportedly has a chance to play this weekend though.

In a wide receiver class with a lot of talent in the top three rounds, Johnson's inability to play consistently over the last two seasons will be a red flag he has to answer for in the predraft process.

What is starting to look like a loaded cornerback class might just add another top-tier player in TCU's Jeff Gladney.

At 6'0" and 187 pounds, Gladney has the size to play inside or outside in the pros. He's shown the instincts and closing speed when attacking the ball in the air to excel in a zone scheme, too. That could bolster his value. Watching Gladney, I get a Kendall Fuller vibe—which might push him into the top 50 picks for 2020.

3. Sleeper of the Week

It's hard to consider a top-50 player a sleeper, but Syracuse edge-rusher Alton Robinson isn't getting enough love nationally as an elite college football player and really good edge prospect. Let's change that.

Robinson, at 6'4" and 256 pounds, has a great frame for a stand-up rusher but has shown the technique and quickness as a hand-down rusher at defensive end to offer traits that fit 3-4 and 4-3 defenses. There's a lot to be excited about when watching Robinson, who hopefully accepts a Senior Bowl invite and shows off in Mobile for a week.

Our Stick to Football tailgate tour was recently announced. If you get a chance to come out, these tailgates are free fan events with no ticket to the game required:

1. Stick to Football is back in-house this week with our podcast episodes now also available on YouTube as a video series. Check out the podcast and subscribe if you haven't already. We will also post a ton of behind-the-scenes content on our Instagram page.