USC reportedly reached out to "at least a half dozen" athletic directors of Power Five schools to replace Lynn Swann, none of whom were interested.

Brett McMurphy of Stadium reported USC had already begun looking for Swann's replacement "weeks" before he gave his official resignation Monday. Swann had been the school's AD since April 2016, presiding over a largely disappointing era of Trojans athletics.

USC plans a national search to find its new AD, which throws a cloud over the Trojans' surprising 2-0 start. Coach Clay Helton entered the season on the hot seat and saw his biggest booster in Swann, the man who gave him a contract extension in 2018, walk away from the position.

Helton said USC President Carol Folt reached out to him to express her support after the Trojans' 45-20 win over Stanford:

"She didn't have to do that, to take the time to reach out to me and say, 'Coach, I love what you're doing, the staff, the players. It was so fun to watch last Saturday and I just want to help you in any way so you and your team can be successful.' That meant a ton to me."

USC has not contended for a national championship since Pete Carroll's departure a decade ago. The program has since seen multiple NCAA scandals and shuffled through three full-time head coaches, with Helton being the only one who did not serve under Carroll.

USC basketball has improved under Andy Enfield but has not made it to the second weekend of the NCAA tournament since 2007.

Folt is tasked with finding an athletic director who will reinvigorate both programs, perhaps at the expense of both incumbent head coaches. With a potentially messy future ahead, it's not a surprise that many Power Five candidates are happy where they're at rather than taking on what will be a huge challenge with outsized expectations. 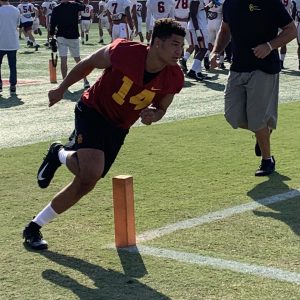 The case for USC never scheduling the FCS: projecting confidence

The case for USC never scheduling the FCS: projecting confidence