The 2019 Gold Cup continued on Saturday, with Group D in the spotlight in Cleveland, Ohio.

Both Panama and the United States had the opportunity to keep their spotless records in tact, while Guyana and Trinidad and Tobago were given a chance to notch their first points of group play.

Below is a look at the latest tournament action.

A pair of first-half goals powered Panama to a 4-2 victory over Guyana on Saturday.

Panama's Abdiel Arroyo opened the scoring early in the first half, notching a goal in the 16th minute. While that gave Panama an early lead, Guyana managed to come up with an equalizer later in the half.

Neil Danns evened the score up in the 33rd minute with a historic goal for Guyana from the penalty spot:

It would not remain a tied game for long, though. Panama moved back out in front just before halftime, thanks to an own goal:

Panama took a 2-1 lead into halftime after this own goal from Guyana. Second half is now underway on @FS1, followed by the USMNT vs Trinidad &amp; Tobago 👀 #GoldCup2019 https://t.co/s5X9m2yZK7

A pivotal moment occurred just moments after the break. While it appeared Guyana keeper Akel Clarke kept his team in the game by denying Erick Davis on a penalty kick, Clarke was called for encroachment and shown a yellow card. Davis took advantage of his second opportunity and extended the lead to two:

Goalkeeper encroachment at the #GoldCup2019!! Guyana's Clarke gets a yellow card for the offense and Davis converts the second attempt for a 3-1 Panama lead. https://t.co/VCxQcnCIhG

Gabriel Torres put the finishing touches on the victory with a header in the 86th minute:

Danns added a second goal in stoppage time, but it was too little, too late for Guyana.

Panama controlled play from several standpoints, owning the edge in possession (54-46), shots (19-5) and shots on goal (8-3). By doing so, it earned a crucial three points as it prepares for the final match of group play.

Knowing they needed a win to keep pace with Panama, the United States took care of business against Trinidad and Tobago with a 6-0 victory.

Team USA had a number of opportunities in the first half, but it wasn't until the 41st minute that it was able to break through. A great pass by Christian Pulisic set Aaron Long up in front of the net, and Long's header was able to just get past keeper Marvin Phillip:

USA TAKE THE LEAD! 🇺🇸 Pulisic sets up Aaron Long who heads it home and puts the USMNT on 🔝 #GoldCup2019 https://t.co/m9qINBZvxl

Both teams had their scoring chances early in the second half. U.S. keeper Zack Steffen came up with a big diving save in the 63rd minute to keep Trinidad and Tobago off the board.

That set the table for Gyasi Zardes and the offense to put the game out of reach:

GYASI ZARDES MAKES IT 2! 🇺🇸 What a pass by Michael Bradley to set it up 🔥🔥🔥 #GoldCup2019 https://t.co/nEMiLdgVLE

The Columbus Crew star had a trio of opportunities to finish off the hat trick in the 72nd minute, but the combination of the post and Phillip denied him a third goal. Zardes was subbed off in the 74th minute.

Phillip couldn't keep hold off the U.S. pressure, though, and Pulisic recorded his first goal of the tournament in the 73rd minute:

PULISIC ADDS ANOTHER! 🇺🇸 The goal fest continues in the second half for the @USMNT! #GoldCup2019 https://t.co/2swNrbbl0q

Midfielder Paul Arriola also got in on the fun:

FIVE for the USA! 🇺🇸 Paul Arriola picks up his second of #GoldCup2019 and the USMNT are running away with it! https://t.co/q7RW90gUX0

That four-goal outburst over the course of 12 minutes turned this match from a fight to the finish into a blowout. And a 90th-minute goal by Long—his second of the game—put an exclamation point on the five-goal second half.

Of course, this was the first matchup between the two squads since a 2-1 Trinidad and Tobago victory in October 2017 that eliminated the U.S. from 2018 World Cup qualifying. While it would be understandable for the players to have revenge on their minds, Team USA was focused on the task at hand.

Arriola said as much leading up to the game, per ESPN soccer correspondent Jeff Carlisle:

"I wouldn't say there is too much of what has happened before in our minds. I think internally and for us as a group, the more important thing is we're playing [them] here in 2019 in the second game of the Gold Cup. A win for us could put us through [into the knockout rounds]. I wouldn't say there's too much regarding the revenge aspect."

Mission accomplished. Team USA got the three points it needed to move on to the knockout stage.

All four teams will be back in action on Wednesday at Children's Mercy Park in Kansas City. Guyana will take on Trinidad and Tobago at 6:30 p.m. ET, while Panama and the U.S. will battle in a match that will decide the group at 9 p.m. ET. 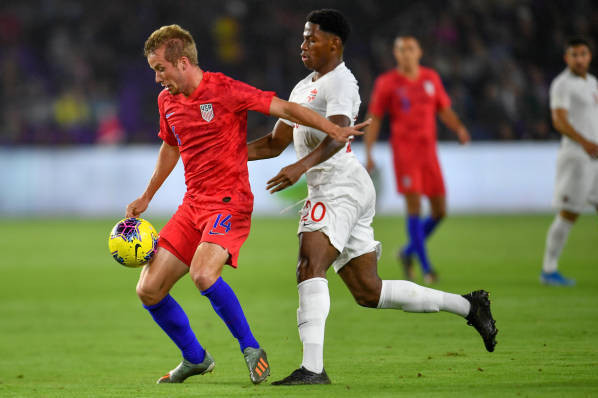