The Portland Trail Blazers will look to shake off a sloppy Game 1 performance to even the series with the Golden State Warriors at Oracle Arena.

Offensively, Portland shot 36 percent from the field and turned the ball over 21 times. On the other end, Golden State took advantage of open shots on the perimeter. An opponent that gives extra possessions and open looks to the defending champions cannot expect to win.

Warriors forward Kevin Durant sat out with a calf strain. The Splash Brothers, Klay Thompson and Stephen Curry, scored a combined 62 points Tuesday. Damian Lillard and CJ McCollum shot a combined 11-of-31 from the field for 36 total points.

Perhaps the Blazers were fatigued following a Game 7 battle with the Denver Nuggets Sunday, but the Warriors didn't let up on their opponent. Instead, the star players came up huge to set the tone for this series.

Will Portland bounce back Thursday? Before we break down Game 2, make sure to note the viewing information below. 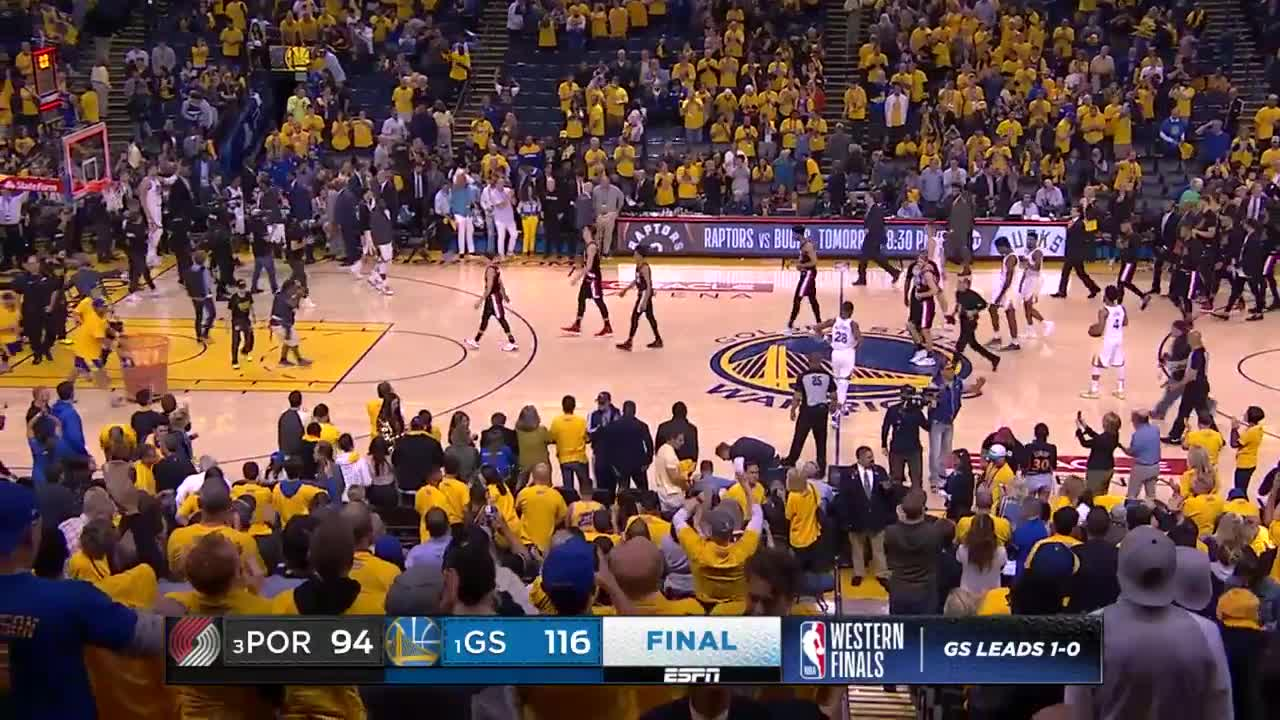 Even though Curry and Thompson have carried the scoring load since Durant exited Game 5 against the Houston Rockets with a calf ailment, Draymond Green also bears some of the responsibility to fill the void as a playmaker. He's done so all season with his defense and ball distribution, but the three-time All-Star may have to score more buckets if one of the Splash Brothers hits a rough patch.

It's difficult to keep a hot hand after a team makes adjustments. The Warriors could use a boost from their fourth-best postseason scorer. Green provided a little bit of everything on both ends Tuesday, recording 12 points, 10 rebounds, five assists, three blocks and two steals.

If the Blazers focus on limiting Curry and Thompson, Green should have some open looks at the basket. He logged a triple-double against the Rockets in Game 3. In that contest, the Warriors' starting guards shot below 38 percent from the field. We could see a similar occurrence Thursday.

In consecutive outings, Lillard has experienced rough shooting nights. Between Game 7 with the Nuggets and Game 1 against the Warriors, he's 7-of-29 from the floor.

Once a player steps on the court, there are no excuses, but Lillard gripped his hamstring during Game 1:

Something to watch: Lillard grabbing at hamstring #ripcity https://t.co/neTKh8szNY

A nagging hamstring ailment can sap a player's explosiveness going to the basket, but Lillard played through 37 minutes and led his team in scoring with 19 points. If he's bothered with an injury, it may take more time to break out of a slump.

McCollum put the Blazers on his back en route to a Game 7 victory Sunday, logging 37 points. He may have to pick up the slack for his backcourt partner, who's struggling with efficiency. The 6'3" sharpshooter could have another strong performance.

McCollum's potential scoring outburst should keep the Blazers competitive in Game 2. However, until Lillard finds his stroke, Portland will have a tough time knocking off the Warriors, especially with Curry and Thompson scoring in bunches.

Blazers guard Rodney Hood has provided a spark off the bench in recent outings, but he's battling a bone bruise in his left knee. The fifth-year veteran went down briefly in Game 1 but logged 17 points in 26 minutes. Nonetheless, his shooting could run hot and cold if there's discomfort.

With adjustments to the game plan, the Blazers will likely attempt to keep Curry and Thompson away from the three-point line, which may equate to a lower-scoring contest. If defense becomes the key to a Game 2 victory, Green's play should come up big down the stretch.

Silver said the NBA must 'do everything in our power to make a meaningful difference.'