NEW YORK — What the Knicks did Thursday afternoon was so shocking, so extraordinary, so extreme, that any explanation must begin with two extreme possibilities:

• The Knicks have taken the dark art of tampering to unprecedented levels and are absolutely certain that at least one superstar (possibly two) is signing with them in July.

• The Knicks have just taken the greatest leap of faith in franchise history, risking the careers of everyone working at Madison Square Garden if the gambit fails.

There are less radical ways to interpret the stunning trade that sent Kristaps Porzingis—the Knicks' fabulously talented young 7-footer—to Dallas. But since executives across the NBA responded with either profound suspicion or profound disbelief, let's start with the extremes.

It's not just that the Knicks gave up on a 23-year-old All-Star, one so unique he's been nicknamed "the Unicorn." It's that they effectively used that young star as inducement to get the Mavericks to absorb their two worst contracts—of Tim Hardaway Jr. and Courtney Lee. In essence, the Unicorn just became bait in a massive salary dump.

And that's what had rival general managers gagging on their afternoon lattes.

"It's never happened," one veteran exec said. "Teams have given up unprotected picks. But no one's ever traded an established star, an established commodity, just to clear money." 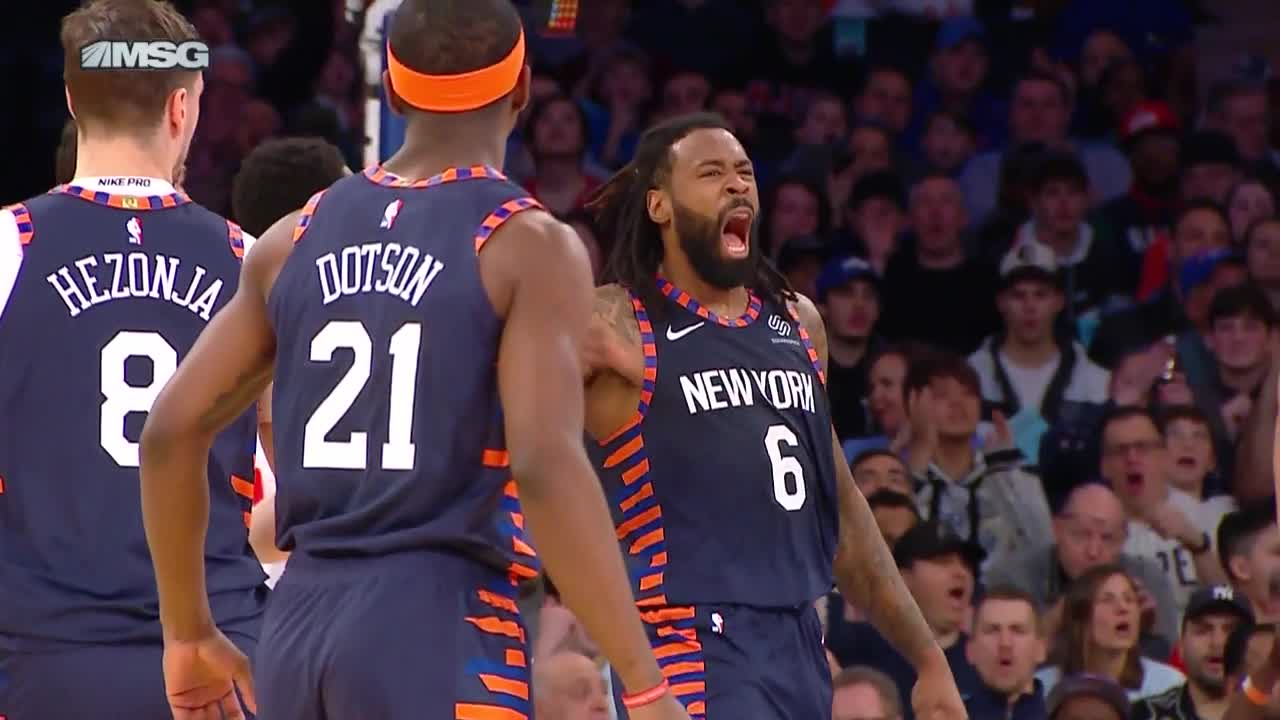 There are other elements to the deal. The Knicks got Dennis Smith Jr., a second-year guard with a mixed reputation; two future first-round picks whose value is hard to gauge; and two veterans whose time in New York will likely be brief, DeAndre Jordan and Wesley Matthews.

But the biggest benefit by far is the $75 million in cap room—enough to sign two max-level free agents this summer when a bonanza of superstars, led by Kevin Durant, will hit the market.

Could this be a vision of the Knicks' future or another dream that will go unrealized in New York?Andrew D. Bernstein/Getty Images

Cue the suspicion and conspiracy theories.

"The only reason you can justify doing it," the same exec said of dumping Porzingis, "is you have some level of certainty in your own mind that you're getting KD and Kyrie, or KD and whatever."

Others were more blunt. "It means they're pretty sure they're getting KD," said a rival exec who believes the Knicks have already been told Durant is coming.

This is today's NBA—ruled by paranoia, plotting and back-channel negotiations.

Long before the Porzingis trade, word of a tacit agreement between the Knicks and Durant was circulating through the league. That Durant's agent, the Manhattan-based Rich Kleiman, has openly gushed about his Knicks fandom (and his aspirations to run the team) only added life to the narrative.

At Madison Square Garden, there is no shortage of people who believe the same.

It is, of course, illegal for any such agreement to exist—or even for discussions to occur while a player is still under contract with another team. But it happens.

Does Thursday's bold salary dump indeed mean the Knicks have Durant in the bag? We won't know until July. A lot can change in five months.

Which brings us to the risk. And there's a lot of it.

What if the Knicks whiff on Durant, just as they whiffed on LeBron James in 2010? What if Irving stays in Boston, Walker stays in Charlotte, Butler stays in Philadelphia and Leonard lands in Los Angeles (with the Clippers)?

What if the Knicks land just one star? Even that's a dicey outcome, given how little proven talent they have. Rookie Kevin Knox has shown only flashes so far. Mitchell Robinson is a project. Smith, although an elite athlete, fell out of favor in Dallas after just one season because of his poor decision-making and ball dominance.

Having not experienced a winning season since his arrival in New York, Kristaps Porzingis lost faith in the Knicks' ability to turn the organization around.Andres Kudacki/Associated Press

Porzingis has his flaws—and is still recovering from a torn left ACL he suffered 12 months ago—but he was by far the Knicks' best player and their best trade asset. He was absolutely beloved by fans.

But Porzingis had grown disillusioned with all the losing and roster churn and the gnawing sense that the franchise didn't properly value him. He was also on his fourth head coach and second team president in four years. He'd been privately stewing for some time.

It hardly came as a shock Thursday when Porzingis suggested a trade (not requested, per sources), just months before entering restricted free agency.

The Knicks didn't have to grant it. They had the right to match any deal Porzingis signed this summer. They could have waited out the storm, found other avenues to clear cap room, locked up Porzingis for five years and used him as the draw for star free agents.

But now? Now the Knicks have no All-Star to attract the others.

The Knicks also just lost some credibility. It was just a few months ago that team president Steve Mills publicly asserted that the Knicks—after years of foolish short-term fixes, impulse buys and leaps for every shiny object—would take a methodical path forward. Build through the draft. Develop their youth.

"We're committed to following the plan and not just shifting, pivoting, because we see something that is attractive and might fast-track something," Mills said in September. "I've seen that happen and go wrong too many times. That's not what we're doing."

On Thursday, Mills jettisoned the Knicks' brightest prospect in 30 years—for the mere possibility of chasing shiny objects in July.

"If they strike out, they will all be fired," a rival scout said. "Crazy risk, but I kind of like it."

Worth noting: That cap-clogging contract of Hardaway's (four years, $71 million) was given to him by Mills, in his first act after taking the reins from Phil Jackson in 2017. Lee's contract (four years, $48 million) came under Jackson, but Mills was the GM.

Also worth noting: The Knicks could have drafted Smith in 2017, but the Jackson/Mills front office chose Frank Ntilikina, just days before Jackson was fired.

After passing on Dennis Smith Jr. in the 2017 draft, the Knicks added him this week, albeit at what could be a hefty cost.Nathaniel S. Butler/Getty Images

The Knicks effectively sacrificed Porzingis on the altar of their own mistakes.

In the near term, the Knicks might also have damaged their chances of landing the No. 1 pick in June. Jordan and Matthews—assuming the Knicks don't release or trade them—are sturdy veterans who will help win games, thus hurting the team's lottery odds. Both will be free agents this summer, so their stays are likely to be short in any case.

The upside? It's possible Smith polishes his rough edges and becomes an effective lead guard. But scouts are generally skeptical, citing his wonky jumper and shoot-first mentality. The Mavericks had been looking to dump him for weeks.

The two draft picks could be valuable. One of them, a 2021 first-rounder, reportedly is unprotected. But if Porzingis clicks well with rookie sensation Luka Doncic, Dallas could quickly become a playoff team, dropping the pick into the low teens or 20s. A 2023 pick (protected 1-10) is too far off to even think about.

The deal was made so quickly that most teams had no idea Porzingis was even available, which means they had no opportunity to make the Knicks a better offer.

"They absolutely did not do due diligence," one source said.

Still, one team executive suggested the Knicks might win the deal, though it depends on multiple variables—how Smith and the picks work out and, of course, whether any stars take that cap room.

It's a massive gamble. Unless, of course, the Knicks already know how this play ends.

Howard Beck, a senior writer for Bleacher Report, has been covering the NBA full time since 1997, including seven years on the Lakers beat for the Los Angeles Daily News and nine years as a staff writer for the New York Times. His work has been honored by APSE each of the last two years.