Welcome to a new world in college football, everyone. A decade of the inevitable is over after Clemson's 44-16 dismantling of longtime king Alabama in the national championship game.

Lawrence, Clemson's 19-year-old true freshman wunderkind of a quarterback, has changed the way we look at who owns the game.

"I told the guys, 'Screw the NFL, I'm coming back as a graduate assistant to win a couple more national titles,'" Clemson senior wide receiver Hunter Renfrow said. "It's all set up now."

It's all set up because Clemson head coach Dabo Swinney built this program with the idea of competing with, and eventually surpassing, Alabama. It's all set up because the first generational quarterback Swinney recruited (Deshaun Watson) pushed the Tigers to the front of the line with a national title win over Alabama in January 2017.

The second generational quarterback Swinney recruited (Lawrence) then stood tall at the top of the mountain and left no doubt who is leading and who is following.

Moments after the final seconds mercifully melted away for the most dominant dynasty in the modern era—after Clemson road-graded Alabama by holding the ball for the final 10:02 with a "you may as well get used to this" drive—Watson was circling the field at Levi's Stadium, looking for someone to hug.

"It was beautiful, it was perfect," Watson said when asked about this championship season compared to his.

Then he was asked about Lawrence, who took the program he left and did the unthinkable: beat Nick Saban and Alabama like no team has ever before.

And he still has at least two years remaining at Clemson before he leaves for the NFL and some fortunate franchise winds up with the greatest quarterback prospect ever. Start tanking now, fellas.

"He just kept making plays," Alabama defensive tackle Quinnen Williams said. "Every time they needed it, he made it happen. That dude can play."

As impressive as Clemson's clobbering of Alabama was, there's a compelling reality that still remains: This program is built to win for the long haul. The only thing that kept Clemson from backing up its 2017 national title the next season was average quarterback play in a College Football Playoff semifinal loss to Alabama.

Then Lawrence arrived, and he was so good from the moment he stepped on campus as a midterm enrollee that there was little doubt where the season was headed. It didn't take long for him to beat out starter Kelly Bryant, and it was a short leap to reaffirming what the staff had known for years: He would change the way people looked at Clemson football.

"I first saw him as an eighth-grader, and you could tell right then he was different. He wasn't like anyone else I'd ever seen," Clemson co-offensive coordinator Tony Elliott said. "I remember thinking, 'Man, we gotta get this guy.' He was in eighth grade, you know? He was making throws then that seniors in high school don't make."

Just like he was making throws against Alabama that NFL quarterbacks don't make. From the numbers to the field sideline, deep balls with touch, seam throws with zip and anticipation.

The coverage was there; the throws were better. At one point, Lawrence had completed 8-of-10 passes on third down for 240 yards in his first game against Saban's famed Alabama defense. Earlier in the week, in a rare moment of self-talk, Lawrence admitted, "I feel like I was made for this game."

After he cut up the Alabama defense like no quarterback has in Saban's 12 seasons in Tuscaloosa, after Saban called him "special" and "phenomenal," Lawrence reverted back to the philosophy and foundation that Swinney has driven into the heads of his players when speaking of the way he played and how it forced Alabama into its worst loss since 1998: "Did you see our receivers and offensive line? What I do doesn't happen without them."

Want to know why Clemson is the new king of college football? Why the Tigers will begin next season at the top of the mountain and still favored to extend their NCAA record of eight straight seasons of not finishing below their preseason ranking (yes, the NCAA keeps track of these things)?

Because the generational quarterback—the baby-faced, long-haired assassin—made the biggest game of the season look like seven-on-seven pass skels.

Because this rare talent—a player one NFL scout told Bleacher Report "could be the best NFL draft prospect ever" by the time he leaves Clemson—made a game for the ages between two 14-0 teams with more than 40 future NFL players look like a fall Saturday rout of Wake Forest.

Because Clemson has superstar tailback Travis Etienne and emerging star wideouts Tee Higgins and Ross, and a defensive coordinator (Brent Venables) who had Alabama and its point-a-minute offense misfiring the entire game.

Because when you have a quarterback who can do just about anything, it raises the level of play for everyone and increases the margin of error. It makes good teams great and great teams nearly unbeatable.

It makes the inevitable suddenly the vulnerable.

Earlier this week, the Clemson quarterbacks were meeting and game-planning, and what should've been cause for concern (see: the Alabama defense) wasn't. The plays in the passing game were right there, right on game tape, with the right throw at the right time.

And the right quarterback.

Alabama did exactly what Clemson expected: loaded up to stop the run and forced Lawrence to make plays in the passing game. Only there was one big problem with that plan: Lawrence's ability to make every throw.

Moments after the championship rout, Swinney stood on the stage at Levi's Stadium and announced that Clemson would enjoy this national championship for a couple of days before the first team meeting for 2019 on Friday.

That was the first team meeting Lawrence attended in 2018, the first time he met his new teammates, and three months before he threw his first pass in pads during spring practice.

"This one might be a little different this time around," Lawrence said with a smile. It will be his team this Friday.

The generational quarterback standing on top of the college football mountain.

With the paradigm shift in college football. 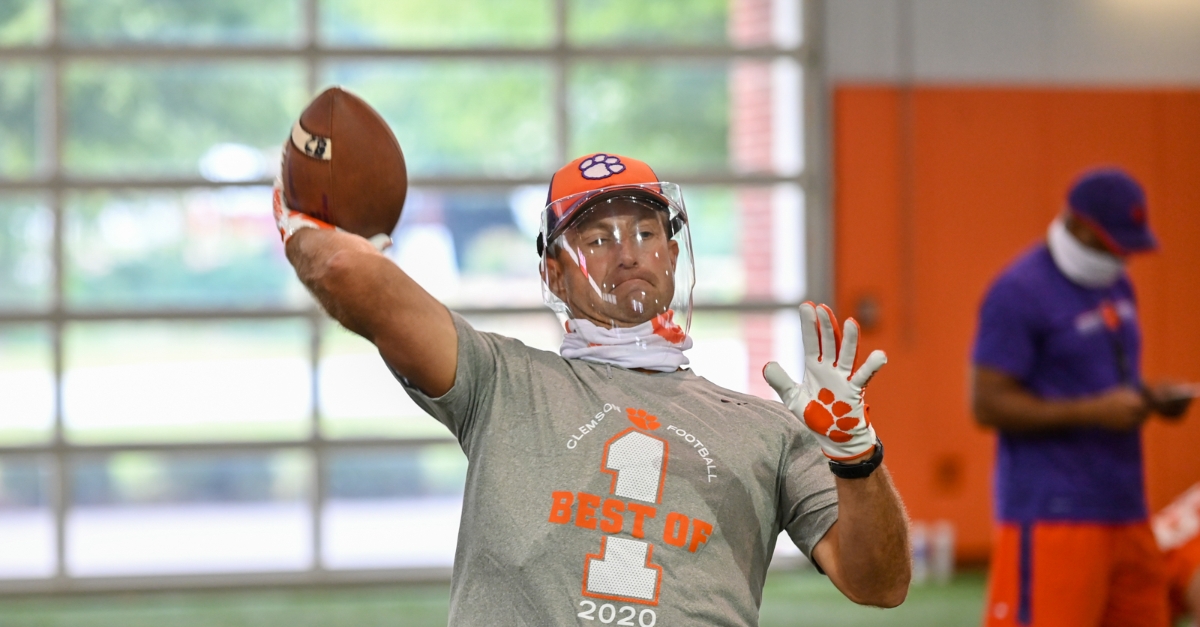 Skalski has his own plan on viewing the 2020 football season

Skalski has his own plan on viewing the 2020 football season