Throughout the 48-year history of the Packers-Vikings rivalry, there have been some special moments, but probably none that will live up to this weekend's events. An aging Viking leader returns with a new band of men, looking to plunder the very homeland he once loved.

The word Viking is Scandinavian for "pirate," an appropriate description of our former hero gone astray. Like the Vikings of the eighth and ninth centuries, Brett The Grey and his band of marauders will be trying to claim a foreign land for their own—in this case, Lambeau Field.

Residents of Minnesota and Wisconsin certainly have a deep-rooted interest in this battle. Packers fans and Vikings fans have always had a special dislike for each other. As bordering states, there was a natural competitiveness between people of the two states. When close-to-Wisconsin Minneapolis-St. Paul suddenly became host to a professional football team, many fans, including those in Western Wisconsin, had a difficult choice to make.

As fans made their choices, resentment built and friends became enemies. The Green Bay loyalists sneered at the Vikings converts and the new Vikings fans became jealous of the Packers as their dominance of the 1960s became a sore point.

The Minnesota Vikings entered the NFL in 1961 as the 14th franchise in League history, but not without a few interesting twists. The Minnesota team was originally slated to be one of the eight charter members of the new American Football League, and had even completed the college draft.

But the NFL saw great potential for a team in Minneapolis, and the prospective owners were lured away from the AFL by the promise of an NFL franchise. The Oakland Raiders took Minnesota's place in the AFL and automatically inherited all of their draft choices.

Bert Rose, the first GM of the Minnesota franchise, chose the Vikings nickname to embrace the area's heavy Scandanavian population and then set about looking for a head coach. Ara Parsegian was his first choice, but when that didn't work out, he hired Norm Van Brocklin, who had just beaten the Packers in the NFL Championship the year before and had retired as a player.

The irony of that choice was not lost on Vince Lombardi, and beating Van Brocklin and the Vikings became another obsession for Vince. They were fierce rivals as coaches, engaging in many shouting matches, as both teams occupied the same side of the field in those stadiums.

Van Brocklin delighted in giving Lombardi a hard time and played up the David vs Goliath role to his players. Lombardi was convinced that Van Brocklin was instructing Viking players to try to injure the Packers players whenever possible. When Jerry Kramer broke his leg in a game vs. the Minnesota Vikings, Lombardi had one of his most famous tirades.

Both Packers and Vikings players have stated throughout the years that the Vikings never purposely tried to injure the Packers players, but they did play hard and tough against those elite Packers teams.

But in the late '60s, as Vince Lombardi exited and Bud Grant entered, the rivalry would begin to turn on it's head. During the '70s, the Packers would win only four out of 20 games against the Vikings. Suddenly the Packers fans were jealous and Vikings fans were sneering. That decade was when the rivalry grew some nasty teeth among Packers fans.

In the 48-year history of this rivalry, the Packers hold a slight winning edge at 49-46-1. There have been many special moments, but let's take a look at just a few:

In the first year of the Vikings' existence, a scheduling quirk matches up the Packers and Vikings for two consecutive weeks. The first-ever meeting between these two teams was played before a sellout crowd at Metropolitan Stadium, with the Packers entering the game as 17-point favorites.

Norm Van Brocklin joked that he would petition the league to reschedule the game in a few weeks, so that Paul Hornung and Ray Nitschke would miss it due to military commitments. The game was played on schedule and the score at halftime was a surprisingly close 13-7.

Vince Lombardi must of had a few choice words for the Packers at halftime, because they came out a different team and rolled over the Vikings, 33-7. The very next week, playing at City Stadium in Green Bay, the Packers would beat the Vikings 28-10 in a driving rainstorm.

After that second game, the Vikings record stood at 1-6 while the Packers were 6-1 and on their way to winning their first NFL championship under Vince Lombardi.

When the Green Bay Packers and Minnesota Vikings met on a frigid December Sunday in Minnesota, the Packers success of the 60s and their domination of the Vikings were nothing more than fond memories. Coming into this game, the Vikings had won seven of their  last eight meetings.

With a game time temperature of zero degrees and a wind-chill of minus 18, this would be a game where the running game would dominate. Fortunately for the Packers, they had the bruising tandem of John Brockington and MacArthur Lane on their side. While neither team could mount much offense in the first half, the Packers' running game and some key turnovers helped the Packers take control of the game in the second half.

Brockington and Lane finished with 114 and 99 yards, respectively. Willie Buchanon had two interceptions and his fellow cornerback, Ken Ellis, also had one. With this win, Brockington would reach the 1,000-yard mark for the second straight season and the Packers clinched the division title for second-year coach Dan Devine.

On a rainy October Monday night at Lambeau, Randall Cunningham introduced the Packers and a national TV audience to their newest heart-breaker, Randy Moss.

Although only catching five passes on the night, Moss gained 190 yards, including two long TDs against undersized and over-matched Packer CB Tyrone Williams. Randall Cunningham threw for 4 TDs and 442 yards on only 20 completions.

"This was the greatest night in my football career," Cunningham would say after the game. It was one of the worse nights for the Packers, as they lost 37-24 and their secondary was thoroughly embarrassed on national TV.

The Minneapolis Metrodome had been developing the reputation of being a house of horrors for the Wolf-Holmgren Era in green Bay. The Packers game on Nov. 5 solidified the feeling and sparked talk of a Metrodome "curse." In a crazy game that included four turnovers in the last five minutes, the Packers went down to defeat, 27-24 to the foot of Fuad Reveiz

In this game, Bret Favre was injured and missed the last third of the game. Hi replacement, Ty Detmer, and defensive ends Reggie White and Sean Jones were all injured in the fourth quarter. Despite everything, the Packers had an opportunity to win this game. With under a minute left and the game tied 24-24, the Packers found themselves at the Viking 38 yard line with third down and a foot to go.

Third-string quarterback T.J. Rubley, who had fumbled the snap on his first play from scrimmage, called the play in the huddle from Coach Holmgren—a quarterback sneak. Holmgren wanted to get a first down, run the clock down, setup a field goal and escape with a road win. Unfortunately, Mr. Rubley had other ideas.

As he got to the line of scrimmage, he saw the Vikings stacking the box and decided to audible to a pass. He found nobody open, but threw the ball anyway and it was intercepted. The Vikings then took the ball down the field and won the game as time ran out on a Reveiz field goal.

After the game, Rubley would say he had no problem with the decision to audible and would do it again, since he thought he was doing what he had been coached to do. His coach, however, seemed to disagree, as Rubley was quickly cut from the team.

After the game, Ron Wolf was uncharacteristically angry at the loss and the team's troubles at the Metrodome. “We’re sick and tired of Fuad Reveiz deciding the outcome of the game,” Wolf said. “All this B.S., ‘Wait until next year,’ is meaningless. The bottom line is, when you’re playing a division opponent, you have to beat that division opponent. I don’t care where it is.”

The ugly loss seemed to spark the Packers, as they would go on to win six of their last seven games to finish 11-5 and win the division title for the first time since 1972.

For those of you who still feel the need to vent your anger, there is a Facebook page  for those who despise T.J. Rubley.

On a cold, windy, rainy, November Monday night at Lambeau Field, one of the most amazing and improbable catches in NFL history sent the Packers home a winner. The Packers came into the game under rookie head coach Mike Sherman with a 3-5 record, while the Vikings were 7-1.

Despite being heavy underdogs and being thoroughly outplayed statistically by the Vikings, the Packers somehow found themselves tied with the Vikings at the end of regulation. It was mostly the Vikings doing, as they committed five turnovers in the game, including three interceptions by Dante Culpepper.

The Vikes were also flagged for 11 penalties, one of which would earn Vikings WR Chris Carter a $5000 fine for kicking Packers CB Mike McKenzie. With eight seconds left in the game, the Vikings Gary Anderson lined up for a 33-yard field goal to win the game. But the Vikings holder couldn't handle the wet ball, bobbling it before recovering and trying to throw a pass.

His throwing wasn't any better, as it was intercepted by Tyrone Williams to force the game into overtime. The Packers won the toss and marched down to the Vikings 43-yard line, where they had a 3rd-and-4. The play call was a quick slant, but as the teams lined up, with the Vikings Chris Dishman showing blitz, Freeman yelled to Favre and made a motion indicating he was going to run a slant and go.

Despite the driving rain and strong winds, Favre went along with the plan and threw the ball deep to Freeman. But Dishman did not blitz and was there to deflect the floating pass that was being knocked around by the wind. Everyone thought the play was over as Freeman fell to the ground.

Of course, the ball miraculously hits his leg, rolls up his body into his hands. Amid widespread confusion, Freeman gets up off the ground and starts running to the end zone. he put a move on the only Viking player that seems to know what was happening and scores the touchdown to give the Packers the overtime win.

The Vikings stood in stunned silence while the Packers celebrated wildly in the end zone. The touchdown inspired Al Michaels' famous "he did WHAT?" In 2005, ESPN named this play the greatest catch in the history of Monday Night football.

Watch it again...along with comments by Brett Favre and Mike Sherman.

2009, Brett the Grey Returns to His Former Homeland

The storyline on this Sunday's game hasn't been written yet. So why don't YOU write it? I think it would be fun if the readers would leave a comment describing how you all think the story will play out. Go for it, readers... 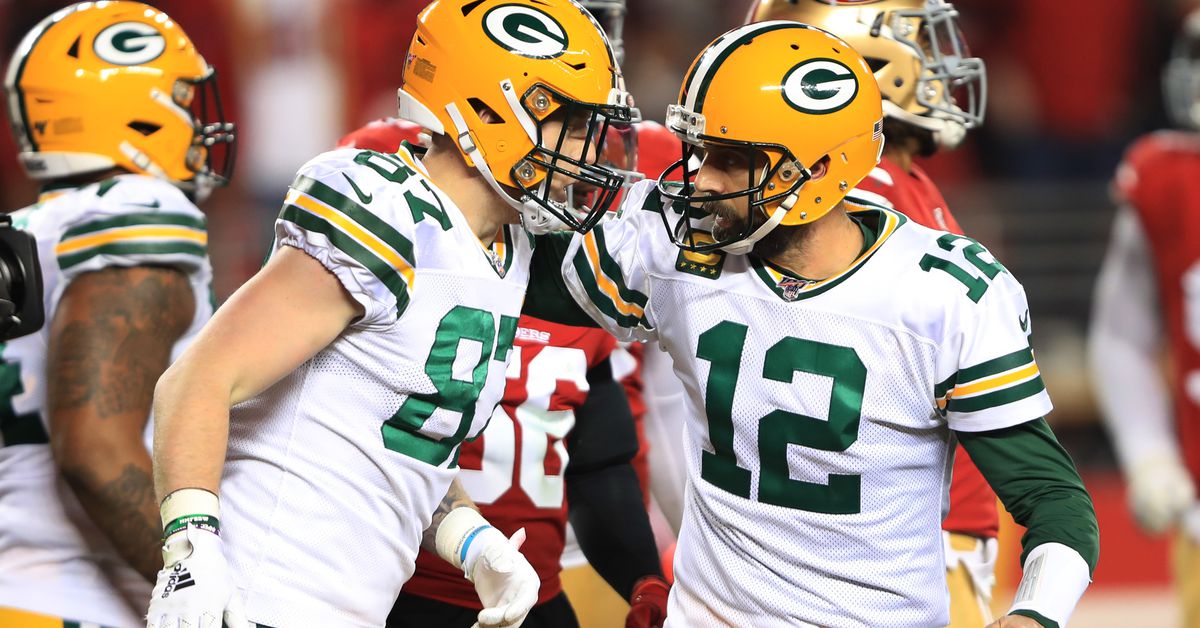 Who has the advantage at Quarterback?