According to Chelsea Janes of the Washington Post, that offer did not include any opt-out clauses.

Ken Rosenthal of The Athletic noted the Nats likely knew Harper wouldn't accept the offer, and he mentioned Washington as a "fallback" for Harper if he doesn't get the deal he wants.

Rosenthal added that Harper is hoping to receive a bigger contract than the 13-year, $325 million deal New York Yankees slugger Giancarlo Stanton signed with the Miami Marlins in 2014.

On Tuesday, Nationals GM Mike Rizzo told ESPN.com that Washington isn't giving up on bringing Harper back into the fold: "We've had conversations and we utilized our exclusivity to negotiate with him late in the season through when he became eligible to sign with a team. We didn't get anything done, but he's a guy that is near and dear to us and we are not closing any doors."

While Harper's batting average left something to be desired, he walked an MLB-leading 130 times and posted an on-base percentage of .393, good for ninth in the majors.

Because of his age and impressive resume, Harper is seemingly in line to land a record-breaking contract. His agent, Scott Boras, has the reputation and skills to get him that sort of deal.

Doolittle Used Lavender Oil on Glove to Calm Him During WS

Doolittle Used Lavender Oil on Glove to Calm Him During WS 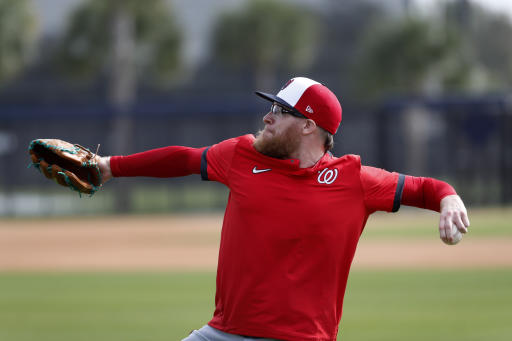