The Houston Rockets are reportedly planning on using Carmelo Anthony as their sixth man during the 2018-19 season.

According to ESPN's Tim MacMahon, head coach Mike D'Antoni wants to start Eric Gordon and bring Melo off the bench.

D'Antoni reportedly also wants to pair Anthony with James Ennis as much as possible due to Ennis' strength as a defender.

MacMahon noted that D'Antoni's desire to start Gordon stems from the fact that Houston outscored opponents by 71 points in the 148 minutes Gordon was on the floor with James Harden and Chris Paul last season.

The Rockets signed Anthony in August after the Atlanta Hawks released him following a trade from the Oklahoma City Thunder.

After the Utah Jazz eliminated the Thunder in the first round of the playoffs last season, Anthony said he had no interest in coming off the bench, per NBA.com: "Yeah, I'm not sacrificing no bench role. So, that's out of the question."

Melo's tune has seemingly changed since signing with the Rockets.

When asked Monday about possibly coming off the bench, Anthony seemed open to it, per MacMahon: "Whatever I have to do to help this team win a championship, that's what's going to be done." 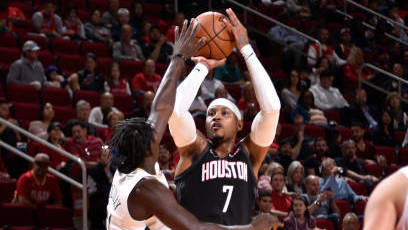 Last season was the worst of Anthony's 15-year NBA career from a production standpoint, as he averaged just 16.2 points per game while shooting 40.4 percent from the field—both career lows—and 35.7 percent from three-point range.

Making Anthony the sixth man would allow Houston to retain the chemistry that allowed it to post the NBA's best record last season at 65-17.

Although moving Gordon into the starting lineup would be a significant change, he is already familiar with the system and has enjoyed success alongside Harden and Paul.

There won't be as much pressure on Anthony to put up big numbers as there was at other stops during his career, but if he can provide an offensive spark off the bench in Houston, the Rockets have a chance to build on what they accomplished last season.