The San Antonio Spurs' parting gift to Kawhi Leonard amounted to just that after seven years with the organization, a tenure in which the 27-year-old earned the 2014 Finals MVP award, two Defensive Player of the Year honors and multiple All-NBA selections with the club.

But the Spurs didn't mention all that good stuff in Tuesday's press release announcing the trade. Leonard's title-winning run with the Spurs was reduced to the following emotionless prose:

"Leonard spent his first seven seasons in the NBA with the Spurs, appearing in a total of 407 games and averaging 16.3 points, 6.2 rebounds and 2.3 assists."

That was it. Oh, and a tweeted photo depicting Leonard smiling and a note that said "Thank you Kawhi" in all-caps—the same treatment that Danny Green, also in the trade to Toronto, received on Wednesday. No exclamation point. No fanfare.

Of course, the Spurs are under no obligation to shower an outgoing player with glowing praise, especially not after what transpired between the two parties over the past year. But it's an undoubtedly icy finish to an otherwise fruitful tenure, like a fireworks show ending with a grand finale of prolonged deflating balloons. Contrast how the Spurs treated Leonard with how the Raptors described DeMar DeRozan's contributions to their franchise in the team's corresponding press release:

Strikes a different tone, doesn't it?

It's a cold world in the NBA, where the only constant is change. The entire NBA landscape has flipped on its head over the past year, and the Spurs have to be dizzied by it all. Half of the players who played in the 2017 All-Star Game, a total of 12 in all, have switched teams since that night in New Orleans, including Leonard, DeRozan, LeBron James, Gordon Hayward, DeAndre Jordan, DeMarcus Cousins, Kyrie Irving, Jimmy Butler, Paul George, Carmelo Anthony, Isaiah Thomas and Paul Millsap.

And that list doesn't include players who have been All-Stars in the last five years who have changed teams since the 2017 Finals wrapped up, like Chris Paul, Blake Griffin, Tony Parker, Jeff Teague, Joe Johnson, Dwyane Wade and Dwight Howard (uh, three times).

The San Antonio fanbase has to feel shell-shocked to be here. After Leonard was named the 2014 Finals MVP in helping guide the Spurs past the Miami Heat, the two decorated franchises find themselves lying in the dust as the NBA's new royalty—Golden State, Houston, L.A. LeBrons, Toronto, Boston and Philadelphia—pass them by.

With LaMarcus Aldridge leading their offense, the Spurs won 47 games and were bounced in the first round of the playoffs last season, a fate they appear content to chase yet again.Andrew D. Bernstein/Getty Images

The Spurs will be fine, but they figure to be nothing more than that. Spurs general manager R.C. Buford and head coach Gregg Popovich turned Green and, as the Spurs might present it, a player who hasn't appeared in a pro basketball game in six months into an All-NBA player in DeRozan, Jakob Poeltl and a protected (1-20) 2019 first-round pick.

That haul is nothing to cackle about, and it's why the team's ceiling over the next couple series has probably been lowered.

DeRozan is a heck of a scorer, but his one-way talent comes at a steep price. He's owed $28 million in each of the next three seasons, which means the Spurs will be allocating about $50 million of the cap to him and LaMarcus Aldridge, who celebrates his 33rd birthday on Thursday. In the East, that duo might be enough to make a run to the Finals. In the West, it's a seat on the playoff bubble.

It's not the future most imagined just a year ago. Had Leonard re-signed and everything broke right, the Spurs would likely be title contenders with an MVP candidate in his prime—health permitting (lest you forget about the 2011 Mavericks running the table around their own version of Leonard, Dirk Nowitzki). But Leonard's quadriceps issues and the resulting standoff between star and team carried a load of uncertainty going forward, and the Spurs decided to bail.

Rather than blow it up and rebuild in earnest with a trade package full of picks, Popovich's Spurs are taking the Pat Riley post-LeBron route of locking in solid veterans for the long haul. Just as the Heat added Kelly Olynyk and re-signed James Johnson and Dion Waiters last summer (and gave $98 million to Hassan Whiteside the summer before that), the Spurs have opted for DeRozan's cap-constricting $84 million for the next three years. Like the Heat, the Spurs have effectively removed themselves from any sort of free-agency bidding in the near future, no doubt a tough pill to swallow for longtime star-magnets Popovich and Riley.

Much as the Heat have put together a winning, but limited, roster together in the wake of LeBron James' departure, the Spurs appear to have settled on a team that will be successful in the regular season but have limited playoff upside.Lynne Sladky/Associated Press/Associated Press

Sure, Manu Ginobili, Marco Belinelli (after returning in free agency this summer) and Patty Mills remain on the Spurs roster from the 2014 title team, but this feels a lot like seeing Wade and Udonis Haslem suit up for the Heat last season. It's an end of an era coming to a rolling stop rather than a slam on the brakes. Without Leonard and James, the respective franchises are hoping for a spot in the postseason, not the Finals.

There's a legitimate chance the Spurs might not even get that far. They finished 47-35 last season, just one game ahead of the ninth-seeded Denver Nuggets. The Nuggets have improved, and two of the Spurs' division opponents—the Dallas Mavericks and Memphis Grizzlies—could surge from the league's basement to a winning tier. In fact, just about every other team in the West got tougher. San Antonio also lost a really good young player to those Grizzlies in Kyle Anderson (ranked 32nd in ESPN's real plus-minus metric last season), and now Leonard and Green.

Defensively, the loss of Leonard is probably overblown. The Spurs ranked second in points allowed per possession behind the Boston Celtics last season, and that was largely without their two-time Defensive Player of the Year on the floor. However, DeRozan has been a turnstile on that end of the floor, rating 467th among 521 players in defensive RPM right alongside Doug McDermott and Jordan Clarkson. For the last three seasons, the Raptors' best defense has been when he's on the bench.

Earlier this month, new Toronto head coach Nick Nurse told SiriusXM radio (h/t Emily Sadler of Sportsnet): "I'm more concerned, on DeMar—and I've already talked to him about this—is that he becomes a little bit more focused, defensively." He then added, "We need to challenge him on that end of the floor. We need to hold him a little bit more accountable."

It'll be a challenge for Popovich and the Spurs, too, but few saw the Spurs being this good defensively without Leonard in the first place.

On the other end of the floor, brace yourselves, Spurs fans, for an avalanche of mid-range jumpers. Per NBA.com stats, Aldridge led all players in mid-range shot attempts last season with 553. DeRozan finished third, with 504 (they both shot an identical 42.5 percent, interestingly enough). If Kobe Bryant unretires and joins Popovich's offense, you'll know why.

Likewise, the Spurs will have a dearth of reliable three-point shooters on their roster. A total of 104 players last season made at least 100 triples. Only Mills and Belinelli are on the Spurs' current squad. That "zig while everyone else zags" mentality brings to mind a fascinating Grantland article from March 2015 that details the obsessive rise of three-pointers in the NBA at the cost of the mid-range game that allowed some players to do what they do best and not have to transform into something that may not come naturally. In the story, the writer even offered a cool thought experiment (which he also presented at a talk at the MIT Sloan Analytics Conference that year): "Imagine if NBA teams could decide whether or not to have the three-point line in their home gym."

That writer was the whip-smart Kirk Goldsberry, who was hired by the Spurs in February 2016. Since then, over the last two seasons, only the New York Knicks have taken more mid-range jumpers than the Silver and Black. You'll fit right in, DeMar!

Not every shot will be a long two. If there's one shooting coach who can fully add a three-point shot to DeRozan's arsenal, it's the Spurs' "Shot Whisperer" Chip Engelland, the guru who helped Leonard develop his range.

Rudy Gay sliced his appetite for jumpers between 16 feet and the three-point line to a career-low rate when he joined the Spurs last season, per Basketball-Reference. But Gay has shown he can make shots beyond the arc at a high level. DeRozan has not.

Come to think of it, the Spurs falling in love with the mid-range shot is a fitting symbol for the franchise right now. You know what you're getting with a long-range two. There's not much variance in it. There's little upside of getting fouled and thus, your ceiling is artificially capped. With Leonard gone, the Spurs have decided to carve out a similar spot in the middle, for better or for worse.

Tom Haberstroh has covered the NBA full-time since 2010, joining B/R Mag after seven years with ESPN as an NBA insider and analytics expert. Haberstroh is also a co-founder of Count the Dings podcast network and regularly hosts the Back to Back podcast. Follow him on Twitter:@tomhaberstroh.

Spurs playoff scenarios: What needs to happen for San Antonio to make the play-in game? 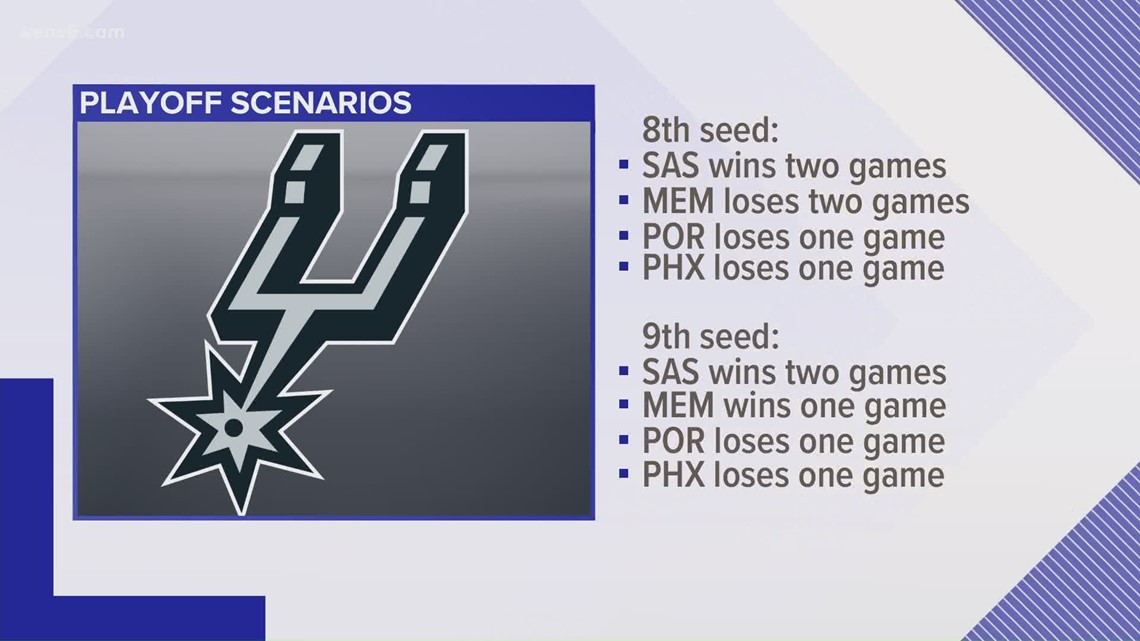 Spurs playoff scenarios: What needs to happen for San Antonio to make the play-in game?