Highly touted combo guard Jalen Lecque announced in a Twitter video Saturday he will forgo a college basketball career and instead enter the 2019 NBA draft pool:

Lecque is the No. 6 combo guard and No. 33 player overall in the 2019 recruiting class, per 247Sports' composite rankings. He had committed to the North Carolina State Wolfpack and officially signed his letter of intent last November.

Before Lecque formally pledged to NC State, ESPN.com's Jonathan Givony noted he was eligible for the 2019 draft.

He attended Brewster Academy in Wolfeboro, New Hampshire, for what was a fifth year of high school. As a result, he'll be a full year removed from his original graduating class in 2018. Throw in the fact he'll turn 19 in 2019, and he can make the jump to the NBA immediately.

Speaking with Givony, Lecque was on the fence about what he'd decide but acknowledged his NBA aspirations:

"I am interested in everything because the NBA is my goal at the end of the day. I want to be a great college player, but my end goal is to help my family. I want to be a concrete Round 1 player if I do make that decision. If I'm guaranteed a Round 1 position, then you never know. I could see myself doing it if I am in a good position at the end of the year. A college education is so important and making that jump is really hard, so I really gotta think about that, but if I'm Round 1, then that's different."

The allure of turning pro now is obvious. Even if Lecque goes undrafted or is unable to earn an NBA contract for the 2019-20 season, he can ply his trade overseas or in the NBA G League and make money. 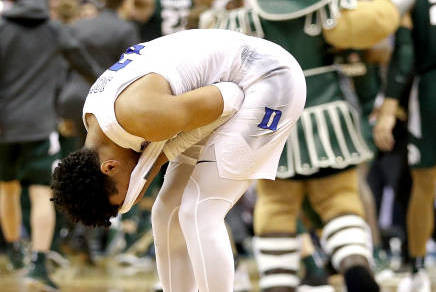 At 6'4" and 190 pounds, Lecque has the frame to thrive at the next level. His athleticism is off the charts as well. He could've given the competition a run for its money if he had entered the 2019 Slam Dunk Contest.

Lecque's shooting is a different matter, though. In 20 games on the AAU circuit with New York Renaissance in 2018, he made 43.6 percent of his total field goals but just 15.8 percent of his three-pointers, according to D1Circuit.com.

The Athletic's Michael Scotto examined Lecque's situation in January and spoke to NBA scouts who singled out that aspect of his game:

"The consensus is clear. Lecque has elite athleticism that will translate to the league immediately, but he must develop a more consistent jump shot and his skills as a full-time point guard before he will become a rotational player in the pros. The only reason to enter the draft is if he receives a first-round guarantee from a team that will develop him patiently."

Lecque obviously believes playing in the NBA or the G League will be more beneficial for his development than spending a season at NC State.

His decision is a tough blow for the Wolfpack, who have generally struggled to attract blue-chip recruits. Head coach Kevin Keatts will have been gearing much of his plans in 2019-20 around Lecque, and now those plans are going out the window.