SAN ANTONIO — At first glance, this appears to be a typical commitment ceremony. Flanked by friends and family. Three baseball caps on the table. This is meat-and-potatoes fare for a talented high school kid making a college choice.

With a microphone pushed in his direction on the sideline during the U.S. Army All-American Bowl, top-flight receiver prospect Amon-Ra St. Brown opens by thanking his father.

"Without him, I wouldn't be where I am today," the Los Angeles-area native says in front of the Alamodome crowd and a national TV audience. "He's pushed me from point A to point Z."

But then there's a turn. It's a sharp left.

"Another thing: If you want to gain some weight, I've been on the Cane Protein," St. Brown says, referring to a supplement that his father, John Brown, began producing a decade ago, primarily for his three boys. "So, I suggest some Cane Protein."

A NASCAR-like sponsorship shoutout—well, that's new to these proceedings. That type of thing usually comes after college, in fact. The sideline reporter conducting the interview makes an interrupting, throat-clearing noise and a hand motion to move this thing along. He asks St. Brown if he'd like to address his mother.

St. Brown thanks her—in German. That's the language Miriam Brown speaks exclusively with her three sons, even though she fluently speaks English. He then segues into a greeting—in French—for his old schoolmates watching in Europe. St. Brown then thanks his coaches in English, and he chooses hometown favorite USC over Notre Dame and Stanford.

In a minute's time, it becomes clear that there's nothing at all typical about St. Brown or his upbringing. It's why he's the Most Interesting Recruit in the 2018 class. There is not even a close second.

Telling Amon-Ra St. Brown's story without acknowledging the role of his father would be like trying to explain the solar system without mentioning the sun.

The astronomy simile is fitting in that John Brown, a former bodybuilder, was a two-time Mr. Universe and a three-time Mr. World in the 1980s.

He wasn't merely a mountain of muscle; Brown was cerebral. He thought about his future and family. Well before his first child was born, he had an idea: He'd give his kids extravagant names.

"My name is John Brown," he says, pausing between the monosyllabic first and last names. "There are a lot of John Browns. I didn't know what they'd do. It's not like I knew they'd play football; you can't know something like that. But I knew they'd be special. I thought they should have special names."

When the first boy arrived, Brown was handed his son's blank birth certificate. On it, he wrote "Equanimeous St. Brown."

Equanimity means composure, and a friend had named a character Equanimeous in a book he'd written. Once John heard the name and its meaning, he was hooked.

"I thought, Ooh, that's powerful. That's what I'm going to name my first son," he says. "Everybody thought I was crazy. They asked me what kind of name that was.

"I told them it sounded good. I told them no one would ever forget it."

And the "Saint" in St. Brown? That part was an ad-lib, he said. It came to him in the moment.

"I thought it would look cool on the back of a jersey," John says.

Middle son Osiris and the youngest, Amon-Ra, were then named after Egyptian gods. Equanimeous sets a high bar for baby names, so deities only made sense, he said.

In essence, there you have John Brown as a dad: Go big (names) and go home.

He believed in his boys' abilities even before birth, and he named them accordingly. Love was the central intention in ordaining them with such titles. All the while, he was conscious enough to project the entertainment value—the visibility—of those names.

The thing is, John Brown wasn't wrong about any of it.

Equanimeous is preparing for the NFL draft after leading Notre Dame in receiving the past two seasons. Osiris will be a sophomore wide receiver at Stanford this fall.

And Amon-Ra is poised to be USC's next great wideout.

Amon-Ra making a play at The Opening in 2017.Credit: Student Sports

If this family structure all sounds familiar, it should.

The premise: Three athletically gifted boys in Los Angeles are born to an outspoken, eccentric father who leads them on a path toward professional sports. It's no wonder the parallels to the Ball family are being drawn by everyone from Sports Illustrated to HBO's Real Sports.

And John Brown isn't at all offended by the comparisons to LaVar Ball, the bombastic basketball dad of Lonzo, LaMelo and LiAngelo.

"I like him, man," John Brown says, adding that he has at times run into LaVar around L.A. "I like what he's doing. I'm all for it."

Brown does add that he'd do some things differently, though he doesn't elaborate.

"But, you know, in the end, he's trying to do the best for his kids," Brown says. It's obvious he feels that, in some respects, he and Ball are kindred paternal spirits.

In addition to a dad, Brown calls himself a guide. A coach. Even a caddie, because he can point out technical issues on the fly.

He had the boys in a weight room at five years old. That's the age at which most children are learning to read, not perfecting the proper squat form with a hollow PVC pipe.

He's always had specific workouts and diets for them. He will not divulge certain institutional "secrets" about fundamental things such as hydration. Over time, he developed a nonverbal language so that he could signal various things to his sons from the bleachers.

Brown remains sincere, however, in his efforts to drive and motivate without pushing too hard. Joy is a big part of this journey, and it's visible and audible.

"He's a great dad. He's hard on the field, but he's really loving off the field," Amon-Ra says. "He's a funny guy. We laugh a lot. He balances it really good."

As much as John has been an athletic mentor yin, Miriam has been the boys' academic oracle yang. And let's be real: She's as demanding as he is.

She enrolled them in French school when they were toddlers. She still only speaks her native German with them, so they do not lose touch with the language. Even during casual conversations in the kitchen about a smoothie? They're in German. Relent even a little bit, she figures, and German is no longer in the home.

When the boys were young, she used to take them to Europe each summer for a couple of months. They would play a variety of sports there, including the ubiquitous soccer.

There, the German national team noticed the prowess of five-year-old Amon-Ra. Officials asked the family if he had a German passport because of his mother's lineage, and if he'd be interested in staying behind and entering the country's youth soccer program.

The family passed, but just imagine that butterfly effect: In another life, instead of prepping to be a receiver at USC, Amon-Ra might already be a star for Bayern Munich, Borussia Dortmund or another Bundesliga club.

Amon-Ra at practice for the Army Bowl in January.Credit: All-American Bowl

A couple of days before the Army Bowl, the West team is practicing on a high school field just north of the San Antonio airport.

"Jesus, he's good," an Adidas official blurts out after St. Brown makes an effortless, twisting catch on the far sideline. "He's so good."

Just looking at him standing around, St. Brown doesn't appear worthy of such adoration. He's 5'11.5", a few inches smaller than the other Army Bowl receivers. No one is going to mistake him for Calvin Johnson or Julio Jones.

And yet it soon becomes evident why St. Brown is first in line for position group drills, with the taller receivers standing behind him.

He runs his first route, a five-yard curl, and the certain mastery of his 191-pound frame is on display. It takes just three seconds. Every step is precise, crisp. He uses subtly physical upper-body strength to create separation. He catches everything, and he does so gracefully. He receives the ball as if it were covered in super glue; it immediately conjoins to his hands.

He's one of those players who is so technically efficient that the game appears simple for him. He's consistently expending great effort, but you'd never know it.

Pearson spent 20-plus years as a head coach at Los Angeles' Cathedral High. He knew of St. Brown from afar and couldn't wait to work with him, even for only a week.

By the latter part of that week, the legend had been confirmed.

"He's probably the best high school wide receiver I've ever seen," Pearson said. "Trust me, I've seen a lot of guys. I've coached probably six or eight receivers that are in the Pac-12 right now. This guy is as good as any I've seen."

"If you're talking about the receiver in this recruiting class that you'd want on your team for a game today, it's Amon-Ra St. Brown," said Barton Simmons, a national analyst for 247Sports. "That's because of how polished he is, how complete he is. That body of work is hard to argue with."

USC coaches cannot talk about St. Brown publicly until he officially signs Wednesday, but those close to the program indicate that they expect St. Brown to play as a freshman.

They envision a role and career similar to that of Woods, whom the Trojans moved around and played at every receiver position. Woods caught an average of 84 passes over three seasons, including a jaw-dropping 111 during his sophomore year.

At USC, Woods was listed at 6'0" and 190 pounds. That's something St. Brown noticed. The same goes for other decorated Trojans predecessors from recent years.

But, really, are they?

Beyond his intention of winning a Heisman Trophy and being the top draft pick in 2021, Amon-Ra and his father also talk about another goal: becoming an international star. There's already an intentional strategy to accomplish it.

That's not something you're going to hear this national signing day—or probably any after it.  Most prospects would be pleased to just be known in their conference. Not St. Brown.

It's why he spoke multiple languages during the commitment ceremony. German newspapers and TV stations are already following his progress.

He hasn't yet taken a college snap—or even set foot on USC's campus as a student—and Miriam notes that he would be the first German skill player in NFL history.

"He'd be like the Dirk Nowitzki of the NFL," she says. "There have been German guys in the league, but really just big dudes."

"We always talk about being something more than just an American athlete," he says. "We speak three languages, so we might as well use it. We could do commercials in France and Germany. Maybe we'll go to World Cups. We'll get to know the soccer players, all that type of stuff."

St. Brown remembers that Beckham, a former soccer player himself, visited Europe a couple of summers ago.

"Can you imagine if I did that, being German?" he says. "It could be a big thing."

Miller Moss, the nation’s No. 5 QB, commits to USC 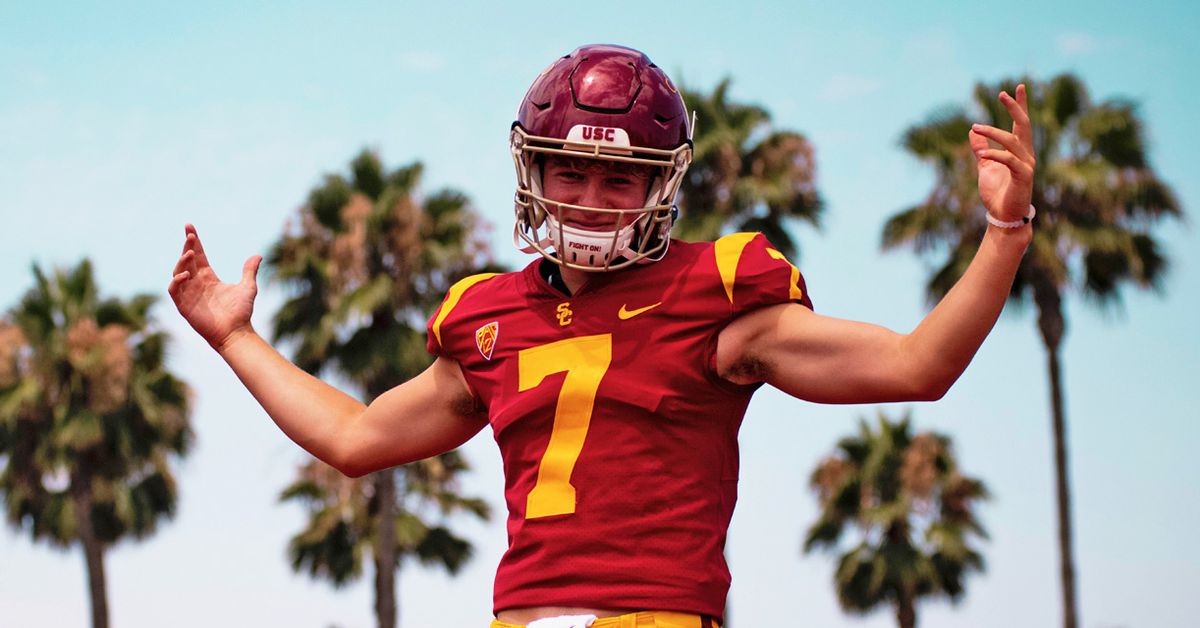 Miller Moss, the nation’s No. 5 QB, commits to USC

HOF head coach at Iowa State, Pittsburgh and Tennessee dies at the age of 85