Regardless of what happens from here, the name Tua Tagovailoa will live forever.

It will live on through wall art, bumper stickers and Alabama barstools. At dinner tables and at tailgates.

No matter what becomes of the sudden face of college football's most amazing machine in the next two or three years—with praise and pressure and hysteria certain first—the name Tua Tagovailoa will always be a fixture of Alabama lore.

His final throw will be embedded in the back of Alabama fans' brains—a 41-yard touchdown strike that landed perfectly in the outstretched arms of wideout DeVonta Smith in overtime over Georgia, giving Alabama a walk-off 26-23 victory in the national championship.

The moment came only seconds after Tagovailoa took a sack—a freshman mistake at the worst possible time—pushing Alabama to the fringe of field-goal range and in need of points. With its kicker still trying to process a missed game-winning field goal in regulation, doubt stampeded in.

But on the next play, as if this was all somehow part of this elaborate plan, Tagovailoa uncorked a throw that was so good and so unexpected that it's still hard to process.

And then afterward, he thanked God. He thanked his parents. He thanked his teammates. He praised everyone but himself, doing whatever possible to point the spotlight elsewhere. He reflected on his journey to Alabama from Hawaii, the place he calls home.

"I don't know how Coach Saban found me all the way in Hawaii from Alabama," Tagovailoa said. "Thank God he found me and we're here right now."

A true freshman is not supposed to enter the game at half—let alone at quarterback—and singlehandedly change the outcome quite like this.

With starter Jalen Hurts struggling and a lifeless Alabama down 13-0, Saban made the decision to pull his starting quarterback with a record of 26-2 over the past two seasons and turn to a freshman with a grand total of 53 passes this season.

Granted, eight of those 53 throws, garbage time or not, were touchdowns this season. And while the casual football fan undoubtedly learned the name and proper way to spell Tagovailoa tonight—T-A-G-O-V-A-I-L-O-A—those more acclimated with Alabama football were hoping that his name would be called sooner than it was.

"We needed a spark on offense," Saban said. "Tua certainly gave us that and did a really good job."

It was not perfect for Tagovailoa out of the gate. Although the playbook seemed to immediately expand with wideouts finally running freely, an interception in the third quarter cooled the buzz.

But then Tagovailoa erupted. He picked apart a Georgia defense that limited Hurts to just 21 passing yards in the first two quarters. He extended plays, brought Alabama's passing attack back from the dead and finished the night with 166 passing yards, 27 rushing yards and three touchdowns, each one more important than the one before.

For weeks (if not months), Tagovailoa was perhaps the most popular player on Alabama's roster. And the nation's top high school dual-threat quarterback from a season ago, according to 247 Sports, was just waiting for his turn.

His very existence on the roster was enough to generate buzz that carried throughout the year. For every three-and-out and incompletion Hurts unleashed, Tagovailoa's name was whispered.

A competition was bound to occur, but it seemed impossible that it would play out during the national championship.

But then, despite not having thrown a pass since mid-November against Mercer, Tagovailoa led his teammates—a group that includes many true freshmen—to a national title (Saban's sixth).

Throughout it all, Tagovailoa looked nothing like a true freshman. From the way he played, to the way he answered questions, to the way he gathered himself when he found his parents in the stands following the win, he convincingly played the part of a veteran.

In the short term, Tagovailoa's efforts will be celebrated in Tuscaloosa and beyond. Not long after, of course, the focus will turn to what comes next—as is often the case with Alabama players—and how the freshman quarterback will follow up such a performance.

No matter what the future of the bright young talent might hold, he will forever be remembered for those 30 magnificent minutes.

While legacies are not typically built in one night, especially at places like Alabama where they're expected to grow with age and experience, there are exceptions to this rule.

Remember the name: Tagovailoa. As if you needed a reminder. 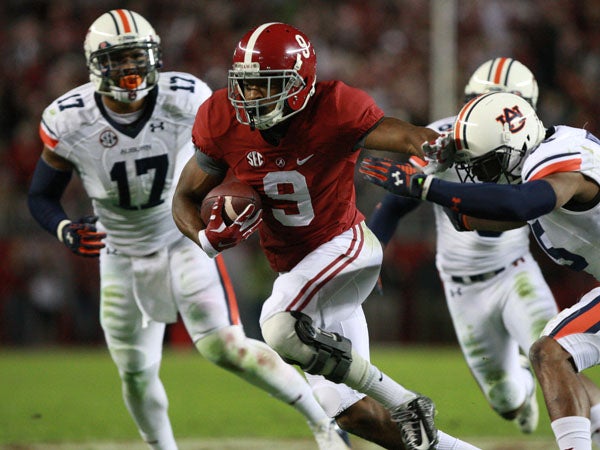