We're about to head into Week 3 of the 2017 NFL season, but we're still waiting to watch some really compelling football.

Sure, there have been some watchable moments so far in the young season. Most of them have involved the AFC West, and particularly the Denver Broncos, who appear to be one of the few NFL teams not suffering from a preseason hangover to open the season.

But as teams start to get into a groove, and as more division rivalries pop up on the slate, we should get some must-see TV around the league in short order.

Here's the coverage map for all the Week 3 games, courtesy of 506 Sports:

Below is all the information you need to know about the TV schedule for Week 3, as well as some picks and previews for the must-watch games on the slate.

Cleveland at Indianapolis (Even): 1 p.m., CBS 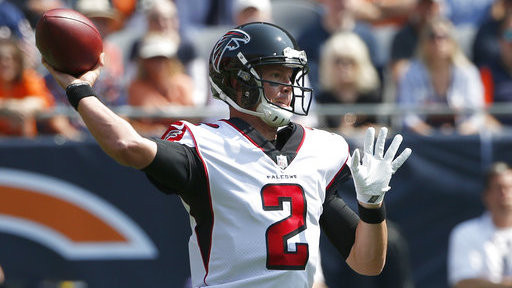 The Falcons and the Lions are both 2-0 on the season and leading their respective divisions, so one of these teams' perfect records will be sullied come Sunday.

Atlanta is feeling pretty good following a prime-time shutdown of Detroit's division-rival Green Bay Packers, to the tune of 34-23. But are these Falcons for real?

The Falcons are eighth in the league in points per game, scoring an average of 28.5. But the Lions are faring slightly better, with 29.5 points per game on average.

Detroit's defense also ranks in the top 10; the Lions are allowing opponents to put just 16.5 points per game on the board.

Speaking of defense, Atlanta suffered some misfortune on Sunday night when star pass-rusher Vic Beasley went down with a hamstring injury. Beasley was a huge reason the Falcons had success against Aaron Rodgers and his Packers in Week 2, forcing a crucial fumble at one point.

According to NFL Network's Ian Rapoport, Beasley will miss about a month:

That's certainly one less thing for the Lions' Matthew Stafford to worry about. And with Stafford's and Ryan's respective arm strength, this one could turn into a shootout.

There's one very simple question heading into this NFC East battle: Can the New York Giants get their first win of the season?

Given the flashes the Eagles have already shown in their young season, the answer may well be no.

Everyone knew that New York would hang its hopes on its defense this season, though the team tried to upgrade the offense as much as it could, adding wide receiver Brandon Marshall in free agency and drafting tight end Evan Engram.

Unfortunately, this offense, protected by a lackluster line, likely isn't going to get much going against Philadelphia's pass rush. Brandon Graham, Fletcher Cox and Mychal Kendricks have combined for 5.5 sacks in two games.

And Odell Beckham Jr.'s return in Week 2 didn't give the unit much of a spark. The star wideout had only four receptions for 36 yards.

But what about New York's defense, which is supposed to be its greatest strength?

But it will have an opportunity to force some turnovers against Eagles passer Carson Wentz, who has looked explosive in his second year in the league but has also coughed up the football with two interceptions and a lost fumble.

Prior to the start of the season, we would have circled this matchup on the calendar and billed it as a showdown between two conference heavyweights.

Fast forward two weeks and both teams are sitting at .500 and in second place in their respective conferences. But they aren't considered heavyweights.

Arizona suffered a huge blow in Week 1 when it lost star running back David Johnson to a wrist injury for at least eight weeks, as he was placed on injured reserve after undergoing surgery. But exactly how long he'll be out is unknown.

"There really is no timeline," Johnson revealed at his locker Wednesday, per Craig Grialou of ArizonaSports.com.

The Cardinals won their Week 2 meeting with the Indianapolis Colts 16-13, but the Colts look like one of the league's worst teams right now, so it's not a huge boost of confidence. So how can Arizona hope to beat Dallas?

Well, it helps that the Cowboys have been having some struggles of their own, most recently falling to the Denver Broncos 42-17. So it's not likely Dak Prescott and Co. are going to force the Cardinals to put up 20-plus points to stay in the game.

Both these offenses should have been high-octane this season, but they are struggling.