A strange narrative has been floating around the college football world this offseason, one that's equal parts perplexing and flat-out absurd.

It goes something like: Brian Kelly, Notre Dame's fiery and demanding head coach, has decided to go all altar boy. A kinder, gentler perfectionist, if you will.

"Brian Kelly is not going to change who he is or his core beliefs," said Miami (Ohio) head coach Chuck Martin, a longtime assistant under Kelly and one of his closest friends in the coaching fraternity. "For anyone or anything."

Before we go further, let's make something clear: Brian Kelly is not pulling back. He's not making change for the sake of it, not handing over the keys to the sleek machine and becoming more of a CEO coach. And he sure as hell isn't sitting around while someone else tweaks it.

He built the damn car, people.

"I know what it looks like. I know what a team needs," Kelly said in an interview early this offseason. "There's no panic here."

You can see why the buzz might be that there is. This team was a last-second field goal away from the College Football Playoff two seasons ago, but people are going to expect panic after the team goes 4-8 and loses seven games in the fourth quarter.

After it guts its coaching staff and hires six new assistant coaches.

After its fanbase and deep-pocketed boosters—those who still believe it's the 1960s and '70s and the Irish have no peer—moan so much that Irish athletic director Jack Swarbrick has to publicly give a vote of confidence to a coach who averaged roughly nine wins a season prior to last year.

After its coach had to spend too much time, he said, fundraising for a football-only facility and not enough time making sure he had a firm grasp of his team's physical and mental focus.

Think about that: The head coach at Notre Dame—which at one point was paying two coaches to not coach (Tyrone Willingham, Charlie Weis) while paying Kelly—was fundraising for a facility during the season.

When asked how that impacted 2016, Kelly said bluntly, "It f--ked up last year's team."

Does that sound like a man who has seen the error of his ways and changed who and what he is? Does that sound like someone so consumed by a quick fix that his second losing season in 26 years as a head coach—a career that includes national and conference championships and 230 victories (112 FBS)—has forced him to scrap it this fall and go rogue?

Brian Kelly doesn't do rogue. He doesn't hide behind failure or stand in the glow of success. He is, to a fault, brutally honest.

As he spoke this past spring about the season that was, he leaned forward on a worn leather couch in his office, in the once state-of-the-art and now-aging Guglielmino Athletics Complex—the facility the university has plans to renovate and Kelly had to fundraise for—to deliver a 60-second soliloquy of admission. Not necessarily of guilt, mind you.

"I was the absent professor," Kelly said. "I wasn't paying attention to the details that we needed. There were internal issues that—if a guy is on it, and he's doing his job as the head coach, he would've seen those things early. My flawed philosophy was, We're going to score points early while we're figuring it out on the other side with a young defense. Well, that didn't happen. We gave up way too many points early, we lost three games, and now we're in trouble."

The natural response in the world of Kelly—where his painstakingly detailed personality was once dubbed "the BK Way" by staffers at Cincinnati because you didn't ask questions, you just went along for the winning ride—isn't change. It's fix.

Even if it means firing close friends who were assistant coaches or hiring a baby-faced, inexperienced 20-something who knows firsthand your expectations to coach the most important position on the field. Or landing two new coordinators who may not be splash hires—but who might fit perfectly with Kelly's no-frills philosophy.

This isn't some pie-in-the-sky ideal of reinventing himself. This is a cold, hard look in the mirror and realizing a fix is needed.

There will be new ideas on defense with coordinator Mike Elko, whose defenses at Wake Forest—yes, Wake Forest; look it up on CFBStats.com—were among the best in the nation. Kelly hired 33-year-old Chip Long (Memphis) as his new offensive coordinator, and he hired former Notre Dame quarterback Tommy Rees—four years removed from his own four seasons of heat under the ND microscope—to coach QBs at just 25 years old.

When told it looks like he's moving away from what he does best (coach quarterbacks and call plays), Kelly said, "They are going to defer to me when it comes to the quarterback decision, when it's a big question."

How's that for clarity?

He didn't have this Notre Dame program playing for a national title in 2012—and a missed field goal from the College Football Playoff in 2015—because he bailed when the blame train started to roll like it always does in South Bend, Indiana.

In a span of one month in 2016, Kelly had to fire his defensive coordinator (Brian VanGorder), publicly called out his center for failing to execute a simple shotgun snap and criticized his future NFL quarterback, 2017 second-round pick DeShone Kizer, because he couldn't stop giving away the ball.

The natural reaction: He was losing his team.

Powlus knows about playing for a coach (Lou Holtz) who blew a gasket or two, or twenty, on the sidelines. He started four years in the 1990s under the Notre Dame microscope and now is Kelly's director of player development.

The former Irish hero, whose postgame ritual was stepping outside the locker room with four Sharpies and slowly walking a mile to the team hotel with his parents while signing anything and everything for adoring fans, has seen it all—from college football historian Beano Cook declaring he would win two Heisman Trophies, to never winning a championship, to setting numerous ND passing records.

If you're pointing the finger, he says, don't avoid the obvious.

"Coaches get on guys these days, and players don't like it. They go into a shell. They feel they're being disrespected," Powlus said. "I want to grab them and say, listen, they're coaching you. But players have to get their point across; they have to explain themselves."

They weren't the only ones explaining away 2016. While the absent professor was trying to fundraise and coach and find a way to win each week with an overmatched defense, his athletic director was assuring everyone that Kelly would be there when the Irish run on the field in 2017.

That gut punch (don't kid yourself—that's exactly what it was) arrived before the calendar reached November, about 11 months from the day Stanford kicked that last-second field goal to suck the life from Notre Dame's playoff hopes the previous season. More disturbing: Swarbrick signed Kelly to a six-year contract extension nine months prior to his vote of confidence.

"I don't know Jack's reasoning for it," Kelly said. "He gets hit more than I do. He's getting hit by guys that have big pockets. My reaction was, Really? You need to say something? If you've got to start defending football coaches after he takes a team to the (BCS) national championship game and a step away from being in the playoffs over the last four years, it's going to be a rough run for you here after being vacant here for 20 years."

That, more than anything, is the foundation of the problematic nature of coaching Notre Dame: Competition isn't only with the other sideline; it's also with ghosts of the past.

Multiple members of previous Notre Dame staffs spoke to Bleacher Report during the offseason about the unreasonable reality on the bucolic campus in Northern Indiana. To a man, no one was surprised when Kelly went from signing a six-year contract extension in January 2016 to his athletic director giving him a vote of confidence less than 10 months later.

"It's the strangest thing. On one hand, it's coaching nirvana, and on the other, wow, that place is so messed up," one former Notre Dame staffer said. "When one of those big boosters gets a bug in his britches, look out. Because then it's not really about coaching, then it gets personal. Then you start to hear that wins and losses aren't the only problem."

Said another former staffer: "There's no hiding from it. You literally have to win your way out of it, or it will crush you."

For former coach Charlie Weis, it was the burdensome 10-year contract extension he signed midway through his first season because of the whiff of NFL interest. Never mind the reality that Weis, at that point in his career, could have had any number of NFL jobs and was negotiating like any other coach in his situation. That huge contract, that guaranteed commitment from Notre Dame, was a festering sore from the day he signed it.

It all ended for Weis on a cold night in Pittsburgh, when the Irish lost late and Swarbrick finally admitted that financial considerations—ND owed $18 million to Weis and $2 million to his assistants—would not play a factor in any coaching decision. Weis arrived home late that Sunday morning to his front yard covered in real estate signs. Two weeks later, he was fired.

Then there's former coach Tyrone Willingham, whose inability to recruit elite players and a lack of charismatic connection with boosters became his perceived downfall. On the day he was fired after a blowout loss to USC in 2004, the man who apparently lacked the ability to reach others outside the lines was watching a Toys for Tots holiday show in South Bend.

He got in his car, drove to the studio and cut a check for the Marines' annual gift-giving celebration.

Neither Weis nor Willingham could win his way out of it. Now it's Kelly's turn.

"No one wins their way out," another former Notre Dame assistant coach said when told of the idea. "You just survive."

It has been nine long months since the Irish lost eight games and failed to qualify for the postseason for the first time since 2009. Notre Dame is working on a top-10 recruiting class, according to Scout.

Back in March, even as he was still recalling the mistakes of 2016, Kelly returned to the football offices after the first practice of the spring with a pep in his step. Junior quarterback Brandon Wimbush, the projected starter, was throwing darts all over the practice field.

"Did you see that?" Kelly said with a wide grin. "The ball just jumps out of his hand."

For anyone or anything. 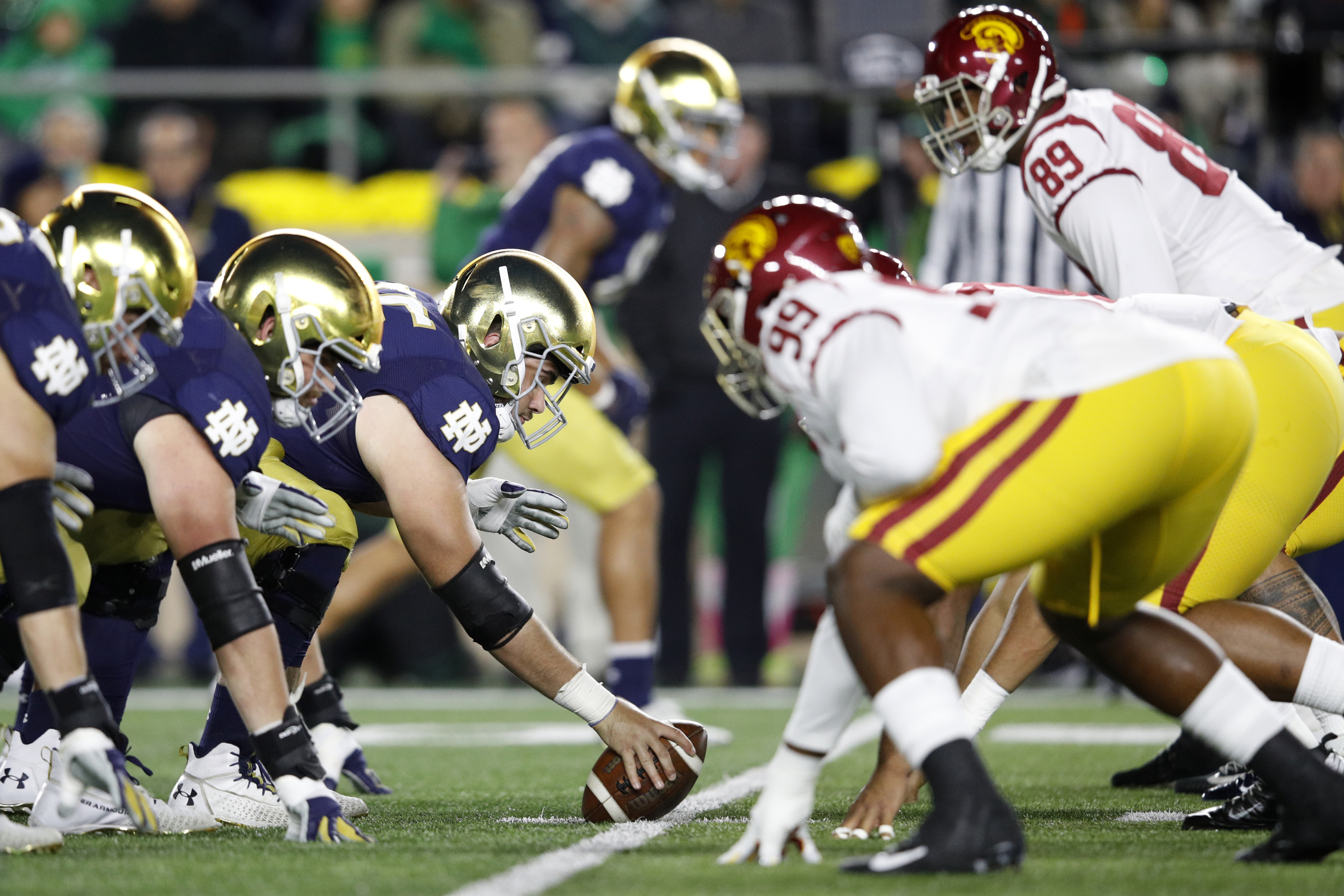