He hasn't even played 20 career games, and already the football world has been high as the sky and low as the ground on who he is—and, more importantly, who he can be.

Josh Rosen, UCLA's strong-armed, free-spirited quarterback, is the No. 1 pick in the 2018 NFL draft. Or he's the next Christian Hackenberg.

Josh Rosen is the most physically gifted college quarterback since a guy named Elway. Or he's a social activist with no true love for the game—only the platform it gives him.

"I've pretty much heard it all," Rosen says.

But who and what to believe? Those Rosen statements were told to Bleacher Report from four different NFL scouts, personnel people in charge of grading one of the most talented yet polarizing college football players in years.

All four agree that in all of 19 career games at UCLA, Rosen has displayed off-the-charts ability. None can agree how it will play out over an NFL career.

One scout says Rosen will eventually get "bored" with football, turn his sights to "changing the world" and be gone within four years. One says he's the next Aaron Rodgers.

One scout says anyone scared off by Rosen's direct and brutally honest personality "should have their head examined—it's football, not your local f--king co-op"—but cautions that Rosen's path could mirror that of Hackenberg: a huge recruit who never got better in college and is now "just a guy" in the NFL.

One scout says Rosen doesn't have a love for the game—that he lacks a certain fire and passion.

So begins Rosen's third year at UCLA, one that follows a breakout freshman season and an injury-shortened sophomore season, and one that includes a boatload of questions about a player who will work with his third different offensive coordinator in three seasons this fall.

Rosen spoke at length with Bleacher Report this spring about his time on and off the field at UCLA, his future in football, the collegiate model and much more.

Josh Rosen: One hundred percent. Wasn't major surgery at all. I had a small tear in one of the muscles in the rotator cuff. They didn't actually repair anything. They scoped it, cleaned out the area, drained it and it healed on its own.

B/R: Could you have played last year (Rosen played six games before shutting it down)?

Rosen: No. It's a throwing-specific muscle. It's like having a tear in your hamstring and doing a hamstring curl. It's just not going to work. If I were playing basketball, I could've played.

Rosen: Yeah, a lot. It was awful. The worst part is you see things, you know you can help, but you can't. As a competitor, that just sucks. When someone looks at you and says, "You're done for the season, you're not going out there again," there's no way to explain how that hits you. Sitting out and watching your teammates, your friends, fight play after play and game after game while you can't help gives you some unique perspective.

B/R: Is it humbling?

Rosen: It's pretty damn humbling. But really, it's a humbling game even when you're playing. I mean, when you get put on your back by another man, that's the definition of humbling. Think about this analogy: You think you're hot s--t, you go into a bar and you start to talk to a girl and get turned down, knocked out. Think about how humbled you feel. I'm getting knocked out like that play after play, even on a successful play. You know how many times you make a throw, the play works and you're still standing? Not often.

B/R: Look at the bright side: You got a chance to heal, maybe catch up on school.

Rosen: Don't get me started. I love school, but it's hard. It's cool because we're learning more applicable stuff in my major (Economics)—not just the prerequisite stuff that's designed to filter out people. But football really dents my ability to take some classes that I need. There are a bunch of classes that are only offered one time. There was a class this spring I had to take, but there was a conflict with spring football, so...

B/R: So football wins out?

Rosen: Well, you can say that.

B/R: So that's reality for student-athletes playing at a major university?

Rosen: I didn't say that, you did. (Laughs.) Look, football and school don't go together. They just don't. Trying to do both is like trying to do two full-time jobs. There are guys who have no business being in school, but they're here because this is the path to the NFL. There's no other way. Then there's the other side that says raise the SAT eligibility requirements. OK, raise the SAT requirement at Alabama and see what kind of team they have. You lose athletes and then the product on the field suffers.

Look, football and school don't go together. They just don't. Trying to do both is like trying to do two full-time jobs. — Josh Rosen

B/R: Wait, some players shouldn't be in school?

Any time any player puts into school will take away from the time they could put into football. They don't realize that they're getting screwed until it's too late. You have a bunch of people at the universities who are supposed to help you out, and they're more interested in helping you stay eligible. At some point, universities have to do more to prepare players for university life and help them succeed beyond football. There's so much money being made in this sport. It's a crime to not do everything you can to help the people who are making it for those who are spending it.

B/R: But those same players go make money in the NFL after being prepared by their college programs.

Rosen: Some do, absolutely. What about those who don't? What did they get for laying their body on the line play after play while universities make millions upon millions? People criticize when guys leave early for the NFL draft, and then rip them when some guys who leave early don't get drafted. [They say,] "Why did you leave school if you weren't going to get drafted?" I'll tell you why: Because for a lot of guys, there is no other option. They were either leaving early (for the NFL) or flunking out. To me, that's a problem within the system and the way we're preparing student-athletes for the future away from football. Everyone has to be part of the process.

B/R: How is it, then, that some guys graduate in three years? Deshaun Watson graduated in three years from Clemson. So did his roommate, Artavis Scott.

Rosen: I'm not knocking what those guys accomplished. They should be applauded for that. But certain schools are easier than others.

Rosen: If I wanted to graduate in three years, I'd just get a sociology degree. I want to get my MBA. I want to create my own business. When I'm finished with football, I want a seamless transition to life and work and what I've dreamed about doing all my life. I want to own the world. Every young person should be able to have that dream and the ability to access it. I don't think that's too much to ask.

If I wanted to graduate in three years, I'd just get a sociology degree. I want to get my MBA. I want to create my own business. When I'm finished with football ... I want to own the world. ... I don't think that's too much to ask. — Josh Rosen

B/R: Where is football in what you've dreamed about all of your life? Because that's a big issue with some NFL scouts—you know, your love for the game.

Rosen: I love the game. I've missed it. I can't wait to play this season. [New offensive coordinator] Jedd [Fisch] is fantastic—a really smart guy who sees the game. This is a big year for us. I don't think I'm making any news saying that. It's important for all of us to play to our potential.

B/R: What steps have you taken to reach that potential, because that's another issue with scouts—is he getting better?

Rosen: Last year was good in one aspect: It reset everything. Missing a bowl game and getting a month off was just a breath of fresh air. I've been going hard for two years, and it took a toll on my body. That time off gave me the ability to look at things from a biomechanics perspective. Everything is intertwined, and it starts with your posture. Without good posture, your feet flare, your hips crunch, your lower back arches, your shoulders come forward and your head is moving. And those little problems translate to the field and your mechanics. I'm up 15 pounds from last season, and have been working out really hard. I've matured so much physically, and I'm a lot stronger. The thing is, I'm only 20 years old. A lot of people think I'm a lot older. I'm going into my third year, and a lot of guys going into their third year of playing are 21 or 22 years old. I'm still young, my body is still changing. Mentally, I feel much older. You figure s--t out, and don't get your ass kicked as much.

I've matured so much physically, and I'm a lot stronger. ... Mentally, I feel much older. You figure s--t out, and don't get your ass kicked as much. — Josh Rosen

B/R: How important is what you do away from the field in relation to how you perform off it?

Rosen: It's critical. I get eight hours of sleep every night. I'm diligent about it. I came to realize last year that sleep and diet are a must because you can't shortchange them. You can work as hard as you want, but if you don't sleep, your body is not going to regenerate and build muscle. If you don't eat, it's not going to have anything to turn into muscle. Everything after that, that's the whole grind. I don't care how hard you grind, if you don't sleep and eat well, unless you have some absurd genetics—and I've seen some guys who can sleep three hours a day and eat McDonalds every goddamn day and have a sixpack, and more power to them—it's not happening for you. I didn't get those genes. So I have to work a little harder.

B/R: Clearly you're looking long-term with football. This isn't just something you're doing while you're at college.

Rosen: I don't know why [scouts] say things like that. Because I speak about things other than football? Come on. I want to play 15 years in the NFL. I want to be great. I want my team to be great, to win championships. Tom Brady might be able to play three or four more years. That's ridiculous to even think about, and that's the bar. I'll play in the NFL as long as they'll have me, as long as I'm physically able to play. Is that love of the game?

B/R: It's almost like you're being asked to prove a negative.

Rosen: All I can do is play and lead this team, and what you see on [game tape] is what you're going to get. I'm not defined by football, but I can't imagine my life now without football in it.

UCLA Football: Is 2020 a make-or-break year for Chip Kelly? 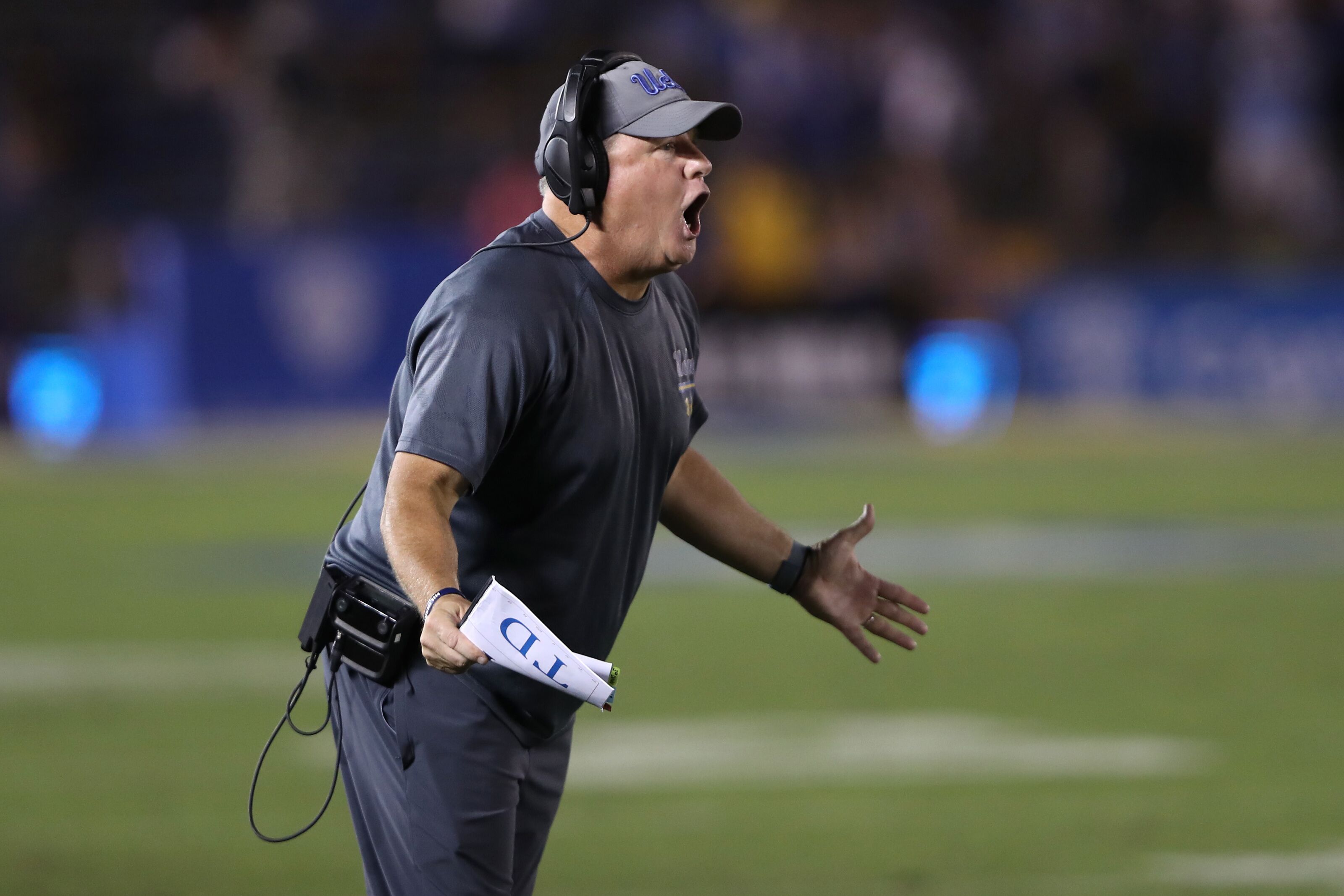 UCLA Football: Is 2020 a make-or-break year for Chip Kelly?