A shoving match between the Cleveland Cavaliers and Golden State Warriors interrupted Game 5 of the 2017 NBA Finals.

The altercation began after Kyrie Irving and David West were fighting for a rebound. West yanked the ball away from Irving and extended his left arm to push Irving away. Tristan Thompson then confronted West, while JR Smith shoved West as well. 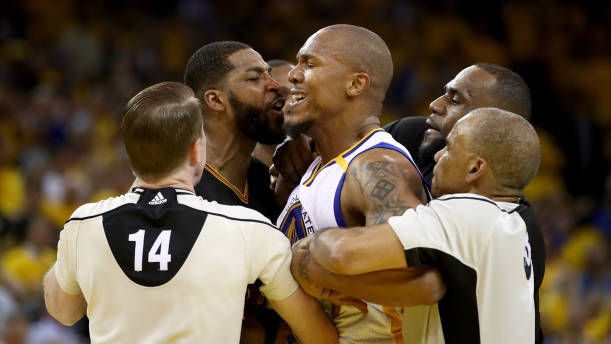 After separating players from both teams and reviewing replays, referees assessed technical fouls to the three players involved.

The NBA avoided issuing any additional punishment to players following a pair of incidents in Game 4. Kevin Durant and LeBron James earned technical fouls after they exchanged words, while Zaza Pachulia appeared to extend his right arm near Iman Shumpert's groin, sparking an argument between the two.

Based on that, it's doubtful Thompson, Smith or West will face further discipline following Game 5.