Jay Cutler floundered in the Chicago Bears' 36-10 loss to the Tampa Bay Buccaneers on Sunday, and the signal-caller has reportedly lost support within the locker room following another lackluster showing.

According to Bleacher Report's Mike Freeman, two Bears players indicated in text messages that most of his teammates have given up on Cutler.

One of those players also told Freeman that Cutler's lack of preparation during the week leading up to the game was "truly embarrassing."

Despite that, Bears head coach John Fox told reporters that Cutler will be the starting quarterback going forward.

Tight end Zach Miller also told reporters that he believed that it was a "complete BS report in my opinion." 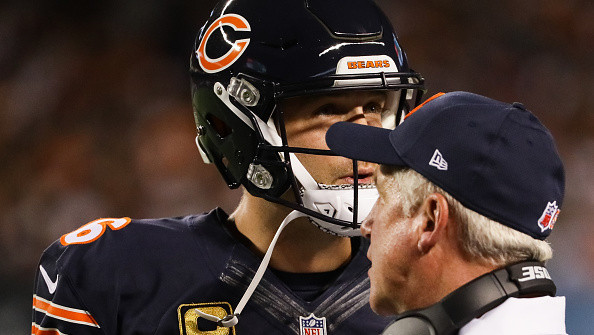 Based on Sunday's performance, it's easy to understand the frustration with Cutler.

Although he returned from a five-week absence and led the Bears to a 20-10 win over the Minnesota Vikings on Oct. 31, Cutler was a mess Sunday. The loss dropped Chicago to 2-7 on the season.

All told, he completed 16 of 30 passes for 182 yards and two interceptions. His one touchdown was the result of a 50-yard Hail Mary heave that found the hands of Cameron Meredith at the end of the first half.

"Take that play away and Cutler was 15-of-27 for 132 yards and two interceptions," Pro Football Focus' Sam Monson wrote. "That’s a passer rating of 37.9, or worse than if he had just dropped back and thrown the ball at the ground every play."

To make matters worse, Cutler tossed both interceptions on back-to-back drives in the first quarter. Bucs safety Chris Conte returned the second one for a 20-yard touchdown.

Cutler also fumbled twice—although he lost only one—on a day when his QBR clocked in at 4.0, according to ESPN.com.

"Usually even the worst Cutler performances are punctuated by impressive throws—the glimmer of potential shining through the layers of crud that keeps coaches hanging on and chasing the prize at the end of the rainbow—but in this game there really wasn’t anything," Monson wrote.

Cutler will have a chance to rebound in Week 11 against a New York Giants defense that's entering Monday night's showdown with the Cincinnati Bengals ranked 27th in passing yards allowed per game (277.4), but if he doesn't shape up fast, the Bears will have plenty of justification to turn elsewhere.