Today I did something that required a bit of restraint, but more importantly required me to die a bit inside. I decided that, for the sake of reporting and getting photos, I would go to Mellon Arena to visit the Penguins' open training camp session—without any Flyers gear. And, as you're about to see, it was much, much harder to do than I expected.

Here's the rundown of time there:

11:52- While walking up ramp, I look down and saw Ruslan Fedotenko getting into his car, less than twenty feet below me. I gritted my teeth angrily, because Fedotenko is my least favorite athlete on the face of the earth. This is due to the fact that Ruslan Fedotenko never managed to play well during his time as a Flyer, yet managed to play quite well after that—especially when facing the Flyers in huge games. In my mind, I was yelling obscenities, but in reality, I was just getting out my camera in the hopes that I'd catch the next player on camera.

11:55- I see none other than Sidney Crosby walk out of the garage, towards a mass of waiting fans. I ran down the ramp towards the street trying to get get good shots of him. I even snapped a couple pictures on my phone to send to some of my friends and family. Sid signed a few autographs, and then pulled a guy in a wheelchair aside to give him a special autograph and photo session. After that he got in his car and left, while one crazy guy ran on the sidewalk alongside his car (I don't think he even wanted an autograph—rather, it seemed like he was just chasing a car like a child will occasionally do when their parents pull out of the driveway and go to work). 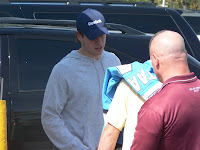 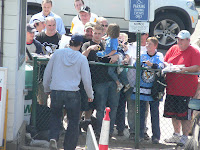 12:03- I just miss Marc-Andre Fleury, but I snap a shot of his sports car revving its engine as he heads out. I also see a few other players as well whose faces I can't identify. 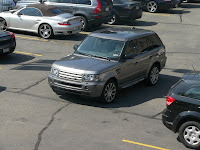 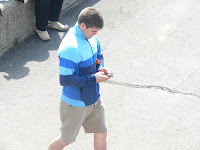 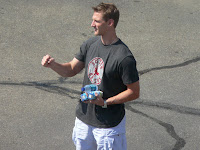 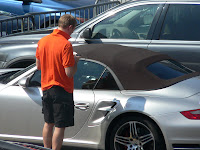 12:19- I enter the arena through Gate 1 and spend about ten minutes trying to figure out what tickets are available for a couple of the Flyers games there.

12:23- I enter the stadium bowl and see the inside of Mellon Arena for the first time in my life. 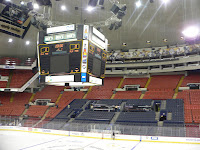 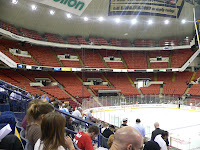 12:23- Players take the ice, and begin warming up for a scrimmage. The key players that were still there (i.e. those who were in the afternoon practice group) included Evgeni Malkin, Bill Guerin, Kristopher Letang, Brook Orpik, and Mike Rupp. 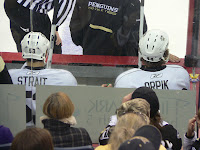 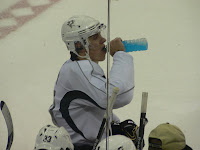 11:53- I leave the stadium bowl for a bit, and head back to the box office to buy tickets for the final Flyers vs. Penguins game of the season, which is March 27th at 1:00PM in Mellon Arena. When I return, the scrimmage is already underway. There are now hundreds of fans in attendance, with some scout scattered among them- easily identifiable in their dressy clothes, holding copies of the Penguins' roster in their hands.
1:13- Finally, a goal is scored (click to see the video), which I had wanted to see because I wanted to hear the goal horn and goal song. However, neither sound is heard (which I suppose is to be expected as a scrimmage). Nevertheless, I left feeling that the visit had been a success, as I had kept cool and done some good old reporting.

So, overall, it was a great few hours, and it wasn't as hard as I had expected to enter the building that hosted so many of the "Top 10 Most Painful Moments" that we're in the midst of counting down here at OBG.

To readers of OBG on Bleacher Report: The full Orange, Black, & Gold (OBG) Blog is available at http://www.orangeblackgold.blogspot.com.

Did Rangers Make the Right Hire?

Did Rangers Make the Right Hire?

10 Years Ago, 'Where Society Fails'

10 Years Ago, 'Where Society Fails'