EL SEGUNDO, Calif. — As the Los Angeles Lakers contemplate whom to select with their prized No. 2 overall draft pick, meeting top prospects for get-to-know-you dinners before putting them through on-court workouts to gauge their skills, allow us to recall what longtime Lakers owner Jerry Buss used to say.

When you're throwing around words such as "future cornerstone" and "franchise player," character counts.

The Lakers dined with Jahlil Okafor on Monday night, and he might well be their pick over guards D'Angelo Russell and Emmanuel Mudiay, who have already broken bread with Lakers officials and later went through drills and workouts, as Okafor will Tuesday morning.

If the Minnesota Timberwolves opt for the all-around, modern-game talents of center Karl-Anthony Towns with the top pick, it would be shocking for the Lakers to pass up the most complete offensive big man to enter the NBA in years. Okafor, 19, is that good.

To ESPN's Dana O'Neil: "He's smart; he cares. Get the list of intangibles, and he's got it."

To complete the backdrop, here's what Jerry Buss said about building champions back in 2006 during an interview with the Casper Star Tribune and Casper Journal:

"Everybody can see the skillful players, but the question is, 'Are you willing to wait until you find a skillful player with high character?' Because eventually, the character is what wins out on the court."

The Lakers, looking back now on five titles fueled by the outgoing Kobe Bryant's personal drive, realize they must get more connected with whichever talented top-tier prospect comes next.

This draft pick could be the big move. Who knows what free agency will bring for immediate dividends, but there's a reason general manager Mitch Kupchak popped champagne in the Lakers offices after the lottery balls bounced the franchise up to No. 2.

Every rookie crop is different. But No. 2 once brought Kevin Durant. No. 2 in this draft is a guarantee of Okafor or Towns, which is why the Lakers aren't really sweating whether anyone projected to go in the Nos. 5-8 range is willing to come work out for them.

Coming off two miserable seasons, No. 2 has already injected the organization with newfound hope.

At a time when some around the NBA demean the Lakers for being behind the times in analytics, they're now going even older school in making sure character counts.

More eyeballs form more solid opinions of someone's character, an assessment that can come out in casual conversation and interaction.

Russell said they mostly watched Game 2 of the NBA Finals during his dinner with Lakers brass. He didn't even feel the focus was on him, which is the best way to get a feel for a guy's true nature.

This dinner-meeting protocol has not been a routine for the club, although it is worth noting Kupchak had a predraft dinner with Julius Randle, the 2014 No. 7 overall pick whom the Lakers remain high on in both talent and character.

With Jordan Clarkson having jumped from the second round to the NBA All-Rookie team and Randle now going full bore on the court after his opening-night broken leg, landing the No. 2 pick has tilted the Lakers' scales from Bryant's farewell tour to optimism about the future.

As the Lakers know from their recent past, it's not just one big break in any rebuild. It wasn't just trading for Pau Gasol that changed their fortunes in 2008. Lots of other pieces fell in place—or, more accurately, were put in place by hard-working people with vision.

The selection and development and motivation of Andrew Bynum. The willingness of management and the franchise player to accept the return of Phil Jackson. The re-signing of character-counts king Derek Fisher. Even little things such as finding contributors late in the draft such as Luke Walton, Jordan Farmar and Sasha Vujacic—or Marc Gasol, who allowed the Pau trade to happen.

Many of those moves still need to be made for the Lakers to have real life after Kobe. But they believe they are finally moving forward—the lottery balls offering tangible proof that something good can happen to them.

That's why they have to remember now to make sure this pick is someone good—in a greater sense.

Jim Buss, executive vice president of basketball operations, is known to be sharp with numbers, like his father. But he differs some in that he hasn't joined these recent dinners, where the Lakers have mined the human element with the top prospects.

Jesse Buss, Jerry’s youngest child but one with uniquely deep acuity when it came to the family patriarch, is at the dinner table with these top draft prospects.

Jesse understands there are individual intangibles to be grasped as he sits there, as does Kupchak from all those conversations when Jerry would cut through traditional logic with an incisive question from a different, personal angle.

If Jerry Buss were still alive, he'd be a lot more interested in how impassioned Okafor feels about carrying on the Lakers' legacy and responsibility than how well he moves his feet to cover a high screen-and-roll right now.

The Lakers would be wise to make sure they have someone to believe in here.

Mudiay might be back soon for a second workout.

Russell felt "a great vibe" in the time he spent sharing his understated confidence with Lakers officials, and he looked a lot like Manu Ginobili in black Nike Kobes during a workout that didn't even showcase his gift for team play.

Still, Okafor is the person who sounds tailor-made to join the Lakers' lineage, having told Chicago Magazine when he made his college choice that he was drawn to "the brand name of Duke, being part of that legacy."

Okafor is the eventual national-champion leader who sprained his ankle, but much to Krzyzewski's surprise came back and played the entire second half and overtime in a victory over rival North Carolina. He sat out the next game before dropping a season-high 30 points upon his return to win in overtime at Virginia Tech.

Okafor is the kid whose frame of reference for life challenges was shaped by his losing his mother from a bronchitis attack with 9-year-old Jahlil the one running next door to call 911—and a single father learning from his mistakes instead of repeating them with his son.

Only time will truly tell which draft prospect has the best (or second-best) strength of mind and body.

Just be advised that it'll indeed take both to build a superstar. 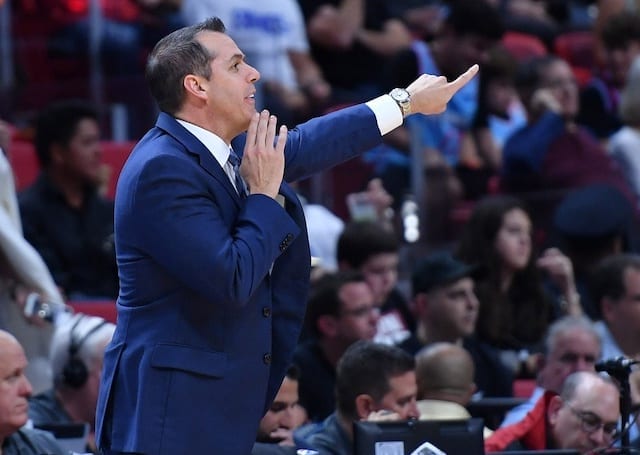