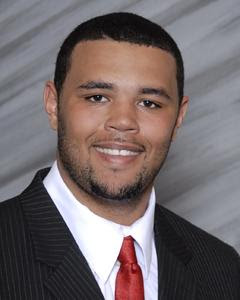 Sure, you recognize my name from the back of my jersey. You may even be able to impress your friends by shouting my name before the announcer when you see my number in on a play.

But, when the scarlet cape comes off and my helmet is in the shop, could you get it right then, Trebek?

Here are a few clues:

From my picture you can tell I'm no wide receiver.

I was All-Ohio as a junior and senior in high school.

I played in the U.S. Army All-American Bowl.

I was tabbed as "Best of the Midwest" by the Detroit Free Press.

I've been ranked in the Top 100 national rankings by ESPN, Scout, Rivals, etc.

I'll be living up to the hype all season long so if you don't know my face, you will.

I know, I know. This sounds pretty close to about everybody on the Ohio State Buckeyes football roster, but we’re talking about me now.