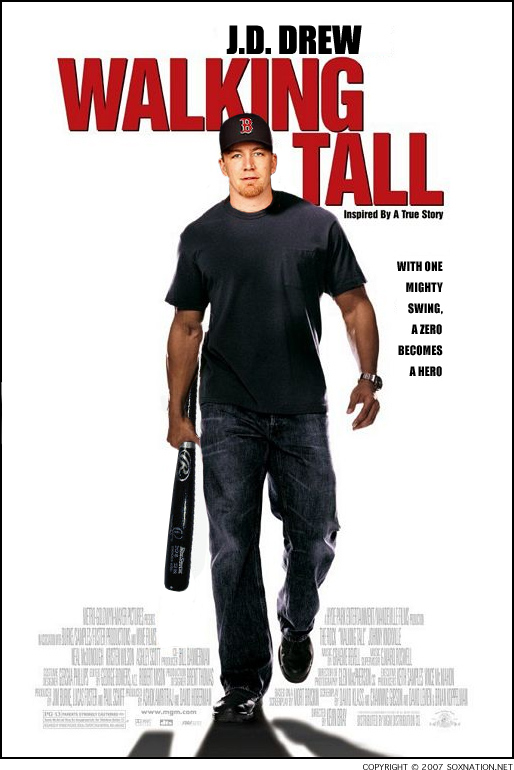 Scott Boras really pulled one on the Red Sox hoodwinking them into signing J.D. Drew to a five-year contract for $70 million when they used the escape clause from his contract with the Dodgers in 2006.

I have never been a fan of Drew since he thought he was too good to play for the Phillies because he evidently didn’t want to play for what they offered.

He is happy he is in the American League now, because Phillies fans let Drew know what they thought of him when he was a visiting player playing in Philadelphia.

Drew is in his third year of his five year contract paying him $14 million a year and so far he has hit 42 homers for the $42 million the Red Sox have paid him.

He has missed about 85 games in two and two thirds seasons with the Red Sox. He has never drove in more than 64 runs in a season for the Red Sox and needs 24 more this season to reach that number this season.

I don’t know how Drew and his agent Boras can sleep at night since Drew will have made $80 million by the end of this season in his career. His only impressive stat is his 204 homers, but it has taken him 12 years of averaging 17 homers a season to reach that number.

He has had 64 RBI or less in nine of his 12 seasons and is averaging about 57 RBI over his career.

There have only been three seasons in which Drew has played more than 135 games and he has never played in more than 146 games in a season.

His .250 batting average this season is the second lowest of his career. He was eight for 14 in his last four games in July yet still only hit .217 for the month and slugged .361.

The Red Sox are probably wishing that Victor Martinez was a right fielder so they could sit Drew and his $14 million salary for the rest of the season.

Instead the Red Sox will keep trotting Drew out to right field while Martinez will have to check the lineup everyday to see if he is catching, playing first base, DHing or sitting on the bench.

The Red Sox front office is probably counting the days till Drew’s contract ends in 2011. Until then they are liable for the $28 million they still owe Drew.

Drew and Boras are probably laughing all the way to the bank thinking of how they duped the Red Sox into thinking Drew would actually earn the money they are paying him.

He better be saving his money because I can’t see another team being stupid enough to pay him $14 million a season again.

Drew is not anywhere close to being a Hall of Fame player with 1211 hits in 12 seasons and only 677 RBI.

When the fans of baseball today sit around the hot stove 20 years from now and talk about the greats of the '90s and 2000s Drew’s name won’t even be mentioned.

It is a fitting legacy for a player who seemed to be more interested in making a lot of money rather than earning that money.