Heading into this season, pretty much everyone would have put the San Francisco Giants near the bottom of the standings. A year removed from a 90-loss season, the only noteworthy addition the team made was the signing of 45-year old starting pitcher Randy Johnson.

Fast forward to the All-Star break, and the Giants are a surprising 10 games over .500 with a two game lead in the Wild Card race. The somewhat premature emergence of the portly power hitting Pablo Sandoval has helped, but the main reason this Giants team is succeeding is their pitching staff.

With a 3.49 ERA, San Francisco's starting rotation has the lowest ERA in baseball. That ERA is a fourth of a point better than Atlanta, the team in second place, and nearly a full point better than the major league average.

But here's the kicker: The rotation is only going to get better. 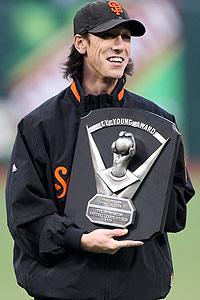 "The Franchise" has overshadowed No. 2 Matt Cain, who is quietly having almost as impressive of a year. The former hard luck loser has already won 10 games in 18 starts this year after winning just 15 in 66 combined starts between 2007 and 2008.

Cain had always been a good pitcher though, recording 3.75 and 3.65 ERAs the past two years, respectively. But this year, he has taken a large step forward and lowered his ERA to a Lincecum-like 2.38. While it's unlikely that number will stay that low, he is a very good No. 2 starter without question.

However, what will set this rotation apart from the rest of the league is what is yet to come. Veteran pitchers Barry Zito and Randy Johnson will soon be replaced by two of the best prospects baseball has to offer.

Those two prospects are the left-handed Madison Bumgarner, and towering right-handed Tim Alderson. Both of whom the Giants selected in the first round of the 2007 draft.

At just 19 years old, Bumgarner has already reached and dominated AA with a 1.74 ERA through nine starts this year. He has limited opponents to a .226 average or less at all three levels he has been to, and more importantly, has limited his walks as well.

His hype is not all production either. At 6'4" 215 lbs, he is well built and has the body to maintain the mid-90s heat he throws. Bumgarner is widely considered the best pitching prospect and one of the best overall prospects, now that Tommy Hanson has elevated to the major leagues.

Alderson is not far behind Bumgarner, ranking around the top 25 of all prospects in baseball. Alderson, 6'7", might not be the flamethrower you might imagine given his size, but he has shown reason to believe he will be a very good starter at the major league level.

With a low to mid 90s fastball, Alderson fires strikes and has the complementary pitches to get batters out without mowing them down. Only a year older than Bumgarner, Alderson is also in AA this year and is pitching well (2.97 ERA).

To finish it off, we cannot forget about the man who just took the league by storm with his no-hitter, Jonathan Sanchez. Sanchez is a very talented lefty with a major walk problem. Hopefully for the Giants, his outing on Friday was a sign of things to come.

Sanchez, 26 years old, still has a lot of time to get a handle on his control. Plus, it usually takes left-handed pitchers longer to develop than their right-handed counterparts (just do not tell Bumgarner that). His ability to strike batters out is very promising, as he has maintained over a strikeout per inning throughout his first 328 innings in the majors.

What is most impressive about what San Francisco has done is that these guys are all home grown. The Giants drafted Lincecum, Cain, Alderson and Bumgarner all in the first round, and they found Sanchez in the 27th.

The youth of this potential rotation is unreal, with none of them exceeding 26 years old. This rotation has the potential to go down as one of the best in baseball history, and we could see it together within the next year.

For baseball's sake, I hope the Giants are able to keep these guys together and avoid trading one of them for a hitter. If they can, this unit should be regarded as highly as those Maddux, Smoltz and Glavine led rotations the Braves had in the 1990s.

Three years ago, everyone would have laughed at this thought, but the Giants hold the key to the next decade.