To all Penn State fans that believe you had the better team and that you dominated Ohio State in Columbus in '08, and to those who say Ohio State was never close to winning that game:

You are truly convinced because you think Penn State was the better team, but you are all wrong!

I'm sure you all remember when Terrelle Pryor fumbled, leading up to PSU's game-winning touchdown, right?

Here are two things you may not know about that play.

No. 1: It was 3rd-and-1, and Pryor was supposed to run up the middle or off tackle to get the first down, but instead he saw an opening and tried to break a big one.

No. 2: You are so lucky he barely fumbled the ball, PSU fans.

Here is a screenshot of the exact moment when he lost control of the ball.

Please take note of the field from where he is and then look downfield all the way to the end zone. 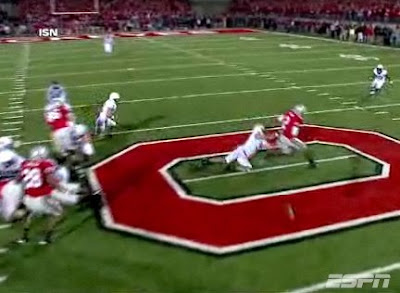 Had he not fumbled, there is no doubt he would have scored on that play.

Seriously, thank your lucky stars that your team lucked into a win over the Buckeyes.

They will not be so fortunate this season. That's right—I'm already letting you know that Ohio State WILL win in Happy Valley this coming season.

I know some of you like to mouth off that you played better vs. USC.

Well, either way it was a thumping at the hands of the Trojans, and your team was completely healthy. Remember, Ohio State lost to USC in Los Angeles without Beanie Wells and with Todd Boeckman at quarterback.

Your "We are, State Penn" chant won't save you on day game.

So sorry Nits, there will be no night game whiteout either to help your clawless Lions.

This year, the young but mighty and talented Buckeyes are going to bring you back to reality on your own field!