Welcome back to the weekly Spring Practice Stock Report. We're just over a week away from the Blue-Gold game, as the Irish head down the home stretch of spring practice.

It's been a big week for Notre Dame football. Some additions, some subtractions and even some Q&As with a few assistant coaches, giving us a rare progress report from position coaches.

The Dismissal of Rashad Kinlaw Thins Out the Cornerback Depth Chart

The loss of Kinlaw isn't one that the Irish will feel right away, but likely forces the Irish to add another cornerback in this year's recruiting cycle. Seniors Josh Atkinson and Jalen Brown aren't likely to return for a fifth year, which made 2013 an important season for Kinlaw's development.

The New Jersey native was running with the third team for most of spring and likely was going to drop down another rung when Florida transfer Cody Riggs joined the program this summer.

Losing a player each spring has turned into a rite of passage for the Irish, and Kinlaw now joins Justin Ferguson, Davonte Neal, Tee Shepard and Aaron Lynch in a group gone, but certainly not forgotten.

Over the past week, Kerry Cooks added two Texas natives to the Irish's 2015 recruiting class. First he landed jumbo safety Prentice McKinney from Dallas and just a few days later received a verbal commitment from Jalen Guyton, a wide receiver from Allen.

That continues Cooks' string of success in the state of Texas, following up a strong recruiting cycle where the Irish plucked Nick Watkins, Grant Blankenship and Kolin Hill from the Lone Star state, with all three holding offers from Charlie Strong's Texas program.

In past recruiting cycles, Mack Brown had an early lead on in-state recruits, identifying and offering players well before other programs gave chase. But Strong's recent arrival has pushed back the evaluation process, and it looks like the Irish are taking advantage.

McKinney brings a jumbo-sized safety to the secondary who the Irish don't have, a big hitter that does significant damage from center field. Guyton is a deep threat for Allen, the back-to-back Texas 5A state champs and one of the best programs in the country.

Great work by Cooks, who is turning into one of the finest recruiters in the country, and who is already responsible for 2015 commit Jerry Tillery in Louisiana.

In Addition to Recruiting Texas Hard, Irish Are Doubling Down on California

Notre Dame has experienced some heartache lately on the recruiting trail in California, spending significant time and resources recruiting the state only to lose out on some key recruits. But don't expect Brian Kelly to back away, even if the Irish turned out bridesmaids in the chase for John "JuJu" Smith, Matt Dickerson and Michiah Quick. (Let's keep Eddie Vanderdoes out of this group.)

Eric Hansen of the South Bend Tribune points out that new quarterbacks coach Matt LaFleur will be joining Mike Denbrock out West, bringing another body to an important recruiting territory.

Kelly handed LaFleur most of what used to be promoted offensive coordinator Mike Denbrock’s old territory. LaFleur has the West Coast from Los Angeles north to Seattle, his home state of Michigan, and Hawaii, where Punahou School in Honolulu has produced another must-have defensive prospect in the mold of former Irish All-American Manti Te’o (defensive end Canton Kaumatule).

LaFleur hasn't been on the recruiting trail in awhile. His last college job was with Ashland University in 2007. But it doesn't take a rocket scientist to sell Notre Dame, and LaFleur's NFL experience and work with Robert Griffin III should draw plenty of interest from high school prospects.

Malik Zaire caused quite a ruckus when he made public his belief that he thinks he's going to be the team's starting quarterback.

The confidence, understandably, brought a lot of attention, but didn't change the way Zaire and Everett Golson go about their work.

"They are competitive, but they do help each other, believe it or not," LaFleur told ESPN's Matt Fortuna on Wednesday. "Just the other day at practice Malik made a mistake and Everett was trying to explain to him why he made that mistake. Yeah, there is a competitiveness but those guys also help each other at game time."

If the Irish defense struggled under Bob Diaco, the struggles were getting to the quarterback and causing turnovers. Those two things are often complementary, with a defense pressuring a quarterback into making a bad decision.

Kelly talked about some of the schematic changes and how, philosophically, they should help create turnovers for his young defense.

"We want to create more pressure for the quarterback," Kelly told Douglas Farmer of Irish Illustrated. "We want them under more duress. From that standpoint, maybe the net gain there is turnovers, but I think if they're making bad decisions and throwing the ball away, we're gaining downs in that respect, too.

"I think that's been a process for us. We're moving in a new direction for our defensive personnel. It's coming, and they're making progress in that regard, but it will take us some more time."

Ishaq Williams will need to provide the pass rush for the Irish.David Zalubowski

Not all defenses are built to create pressure. As we saw with the Irish under former defensive coordinator Jon Tenuta's direction, constant blitzing didn't necessarily do anything but let opponents score quicker.

The personnel on this Irish roster is much stronger than the last few Charlie Weis and Tenuta fielded. But staying sound fundamentally while bringing pressure is key, and that teaching process is ongoing throughout spring. 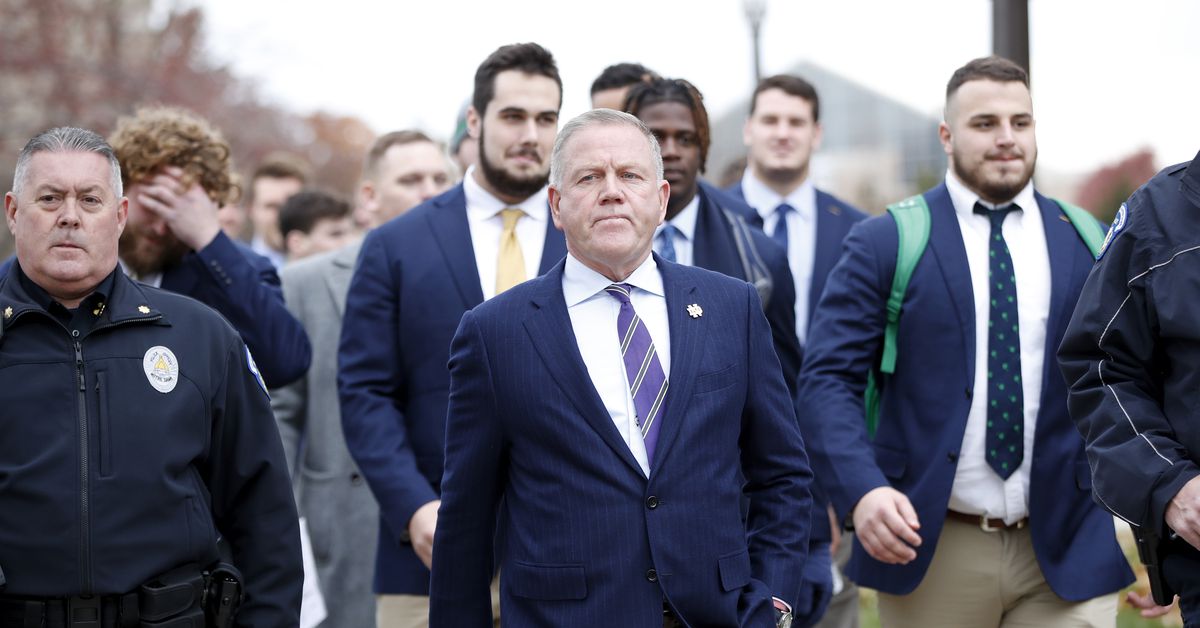 Matt Boomer
via One Foot Down